By Mark Woodworth and Robert Mandelbaum

Despite the relatively high cost of construction and complexity of operations, developers are still attracted to owning and managing luxury hotels. As of August 2019, STR reports that just 0.7 percent of the hotels (2.3% of rooms) in the United States are chain-affiliated luxury hotels. Concurrently, the STR pipeline report shows that 1.2 percent of the properties (2.9% of rooms) either under construction or planned for development meet this criterion.

The reasons for this attraction vary:

To provide some context on the relative performance of luxury hotels in the U.S., CBRE Hotels Research analyzed historical luxury chain-scale performance data from STR, the luxury chain-scale forecast from CBRE’s September 2019 Hotel Horizons® report, and 2018 financial performance metrics pulled from a sample of 261 luxury properties (chain-affiliated and independent) in CBRE’s Trends® in the Hotel Industry database. The following paragraphs summarize the findings of our analysis.

From 1989 through 2018, chain-affiliated luxury hotels have continually averaged superior occupancy levels compared to the overall U.S. market average. During this 30-year period the occupancy premium averaged 750 basis points. The premiums peaked during the periods 1997 through 2000, 2007 through 2008, and 2011 through 2014.

When analyzing the pace of luxury hotel development, it becomes evident that these occupancy premiums have stimulated the interest of developers and helped justify the higher construction costs. In general, the greatest percentage increases in luxury supply have occurred in the years following the premium occupancy periods noted earlier.

Given the extended time required to build a luxury hotel, the actual opening of these properties has tended to occur during the latter phases of market expansion, or the initial stages of market contraction. Therefore, the first few years of operation have frequently happened in depressed market conditions, and declining levels of occupancy and ADR. This unfortunate timing trend has made is difficult for luxury hotel owners and investors to earn a return during the initial years of operation.

CBRE’s September 2019 Hotel Horizons® forecast assumes a slowdown in the U.S. economy. CBRE Econometric Advisors is forecasting Gross Domestic Product (GDP) to decelerate during the second half of 2019, and slow down to a pace of less than 1.0 percent during the first half of 2020. The impact of this economic slowdown will be felt by the overall U.S. lodging industry beginning in 2020 as demand growth slows to 1.3 percent.

The economic slowdown is forecast to impact properties in the luxury chain-scale earlier. CBRE is forecasting the pace of demand for luxury hotels to end 2019 at 0.4 percent, a much greater fall off in performance relative to the overall U.S. lodging industry. Fortunately for luxury hotel owners, new competition is projected to increase at less than half the long-run average annual change in supply for this segment over the next three years. Given the modest growth in new supply, luxury occupancy levels should remain above 73 percent, and ADR growth will follow the national average, through 2022.

The higher levels of revenue generated by luxury hotels is not only a product of the occupancy and ADR premiums, but the diversity of revenue sources. In 2018, rooms revenue in the luxury hotel sample averaged 59.3 percent of total revenue. This compares to 69.8 percent for all the hotels in our Trends® in the Hotel Industry sample. The average luxury hotel earns 32.0 percent of its revenue from food and beverage, and another 6.7 percent from other operated departments. As expected, the diversity of revenue is greater at luxury resorts, compared to luxury properties in city center locations.

The higher departmental expense ratio can be attributed to the abundance and quality of services and amenities offered at luxury hotels. Within the rooms, food and beverage, and other operated departments on a luxury hotel operating statement you will find the costs associated with concierge, fine-dining, room-service, golf, spa, and high-end retail operations typically found at luxury hotels.

Higher labor costs also contribute to the greater departmental expense ratio. In hotels the majority of employees work within the operated departments, and at luxury hotels high levels of personal service is an integral part of the guest experience. In 2018, the combined expenditures for salaries, wages and employee benefits at luxury hotels equaled 36.4 percent of total revenue compared to just 30.7 percent at the overall sample.

Undistributed expenses are more fixed in nature compared to operated department costs. Therefore, the lower undistributed expense ratio enjoyed by luxury hotels can be explained by the greater levels of revenue. The administrative, IT, marketing, maintenance and utility costs of a luxury hotel will not differ significantly from those of a comparable sized property within a lower chain-scale, but the revenue difference is significant.

The net result is a relatively low gross operating profit (GOP) margin of 33.3 percent of total revenue for luxury hotels. This compares to the 38.5 percent average GOP margin for the overall Trends® sample. However, while the GOP margin may be less, the dollar value of the GOP per-available-room for luxury hotels is 84 percent greater than the overall sample.

Developers and investors are attracted by the occupancy and ADR premiums, as well as the prestige, of owning a luxury hotel. However, these benefits come with the challenges of higher construction costs, operating expenses, and a history of poor market timing. Clearly it takes a certain owner who can appreciate and tolerate the unique development and management demands of a luxury hotel. 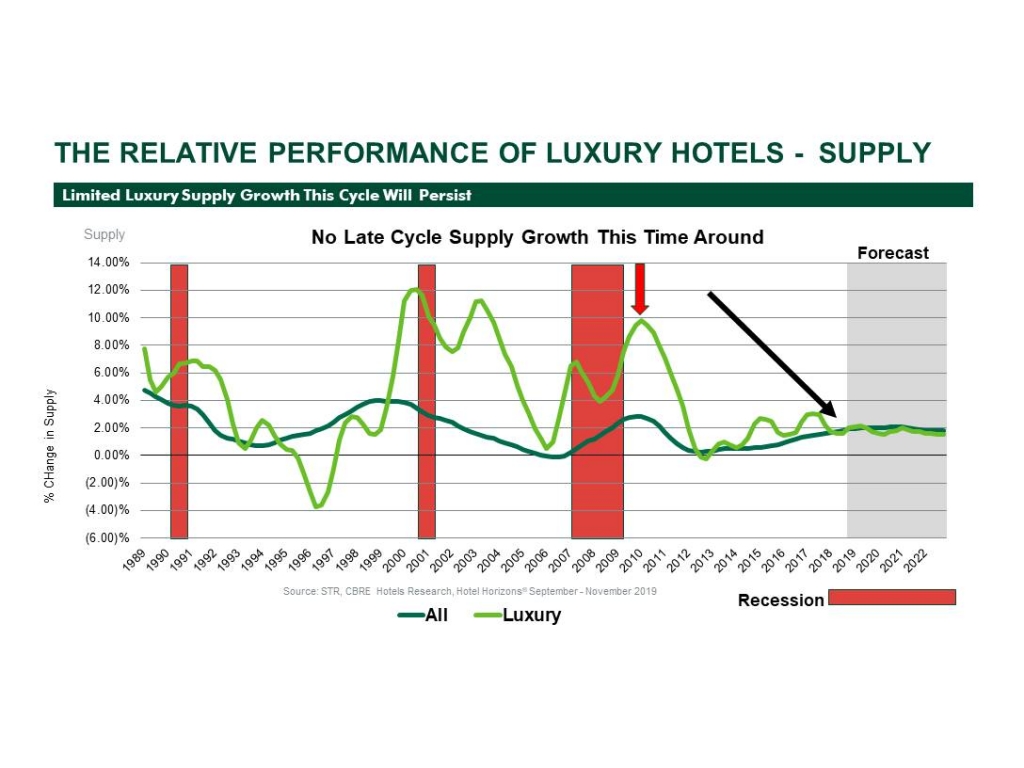 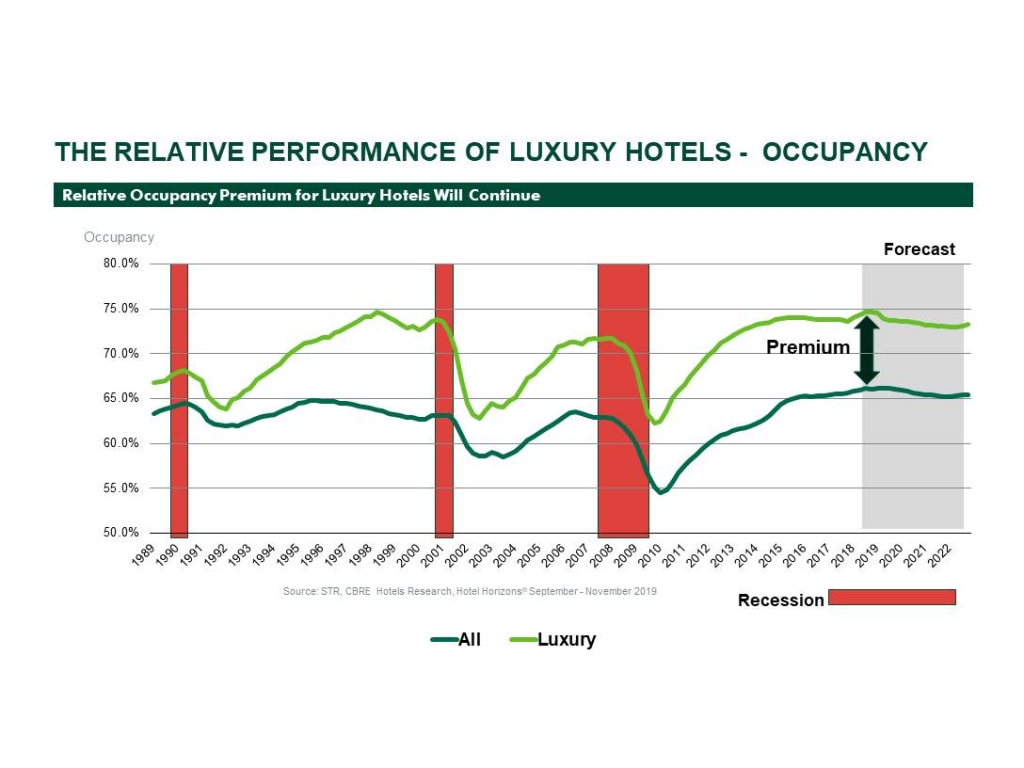 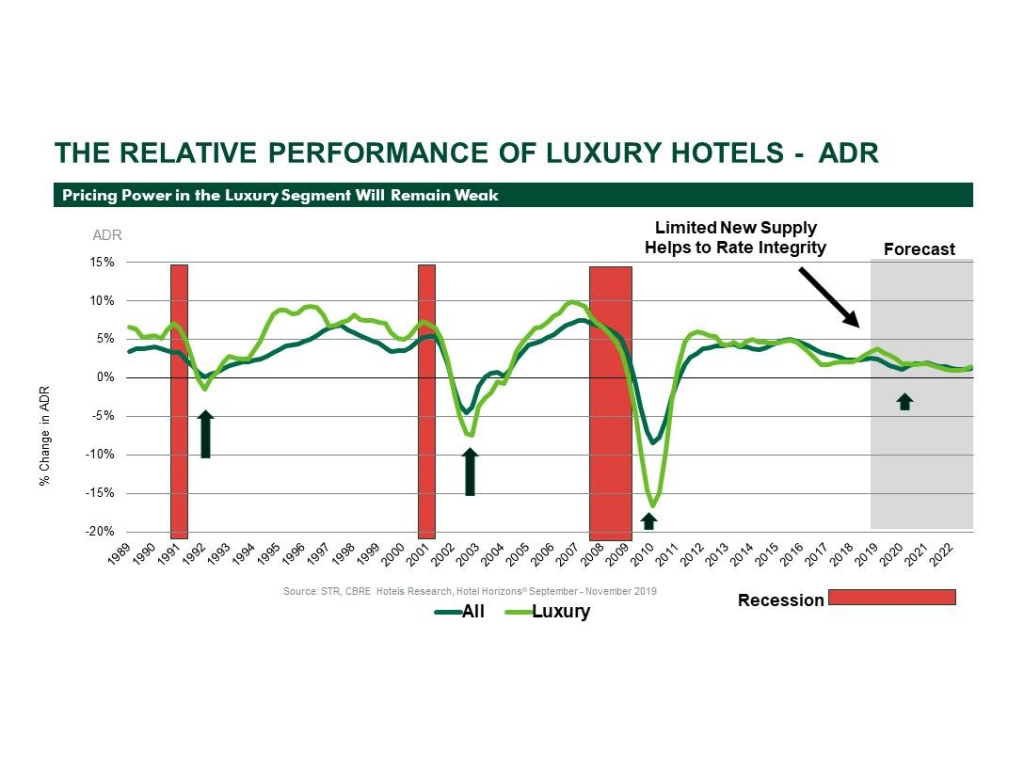 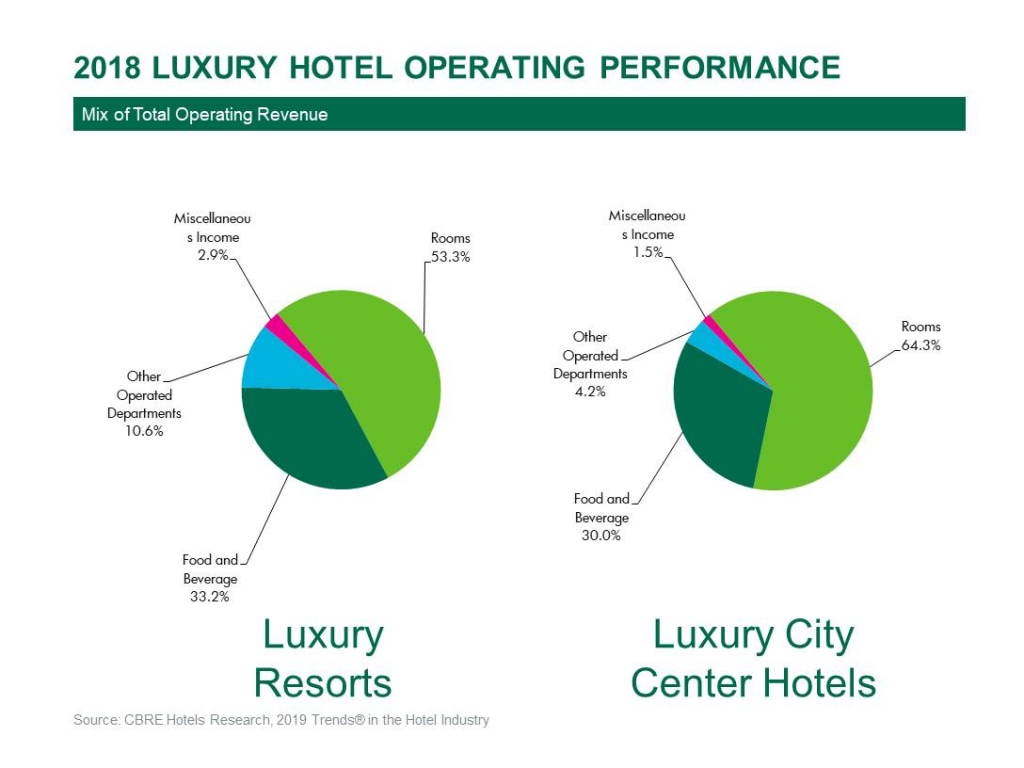 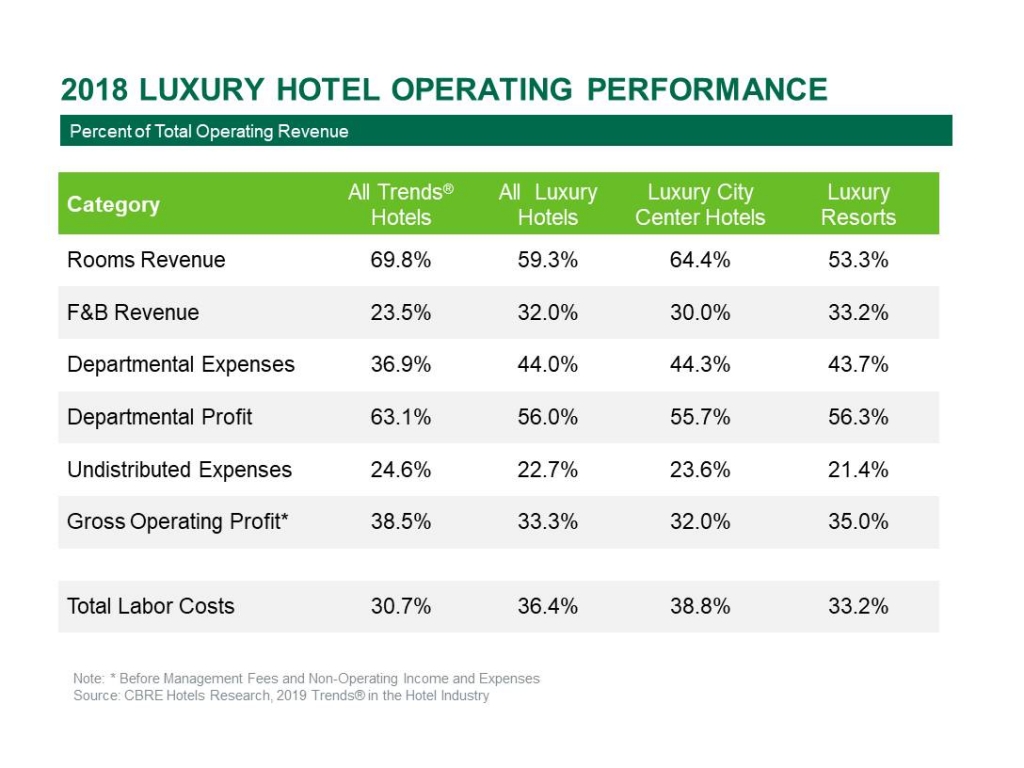 Mark Woodworth is Senior Managing Director of CBRE Hotels Research. Robert Mandelbaum is the Director of Research Information Services. To learn more about CBRE’s forecast and benchmarking tools, please visit pip.cbrehotels.com, or call (855) 223-1200. This article was published in the November 2019 edition of Lodging.