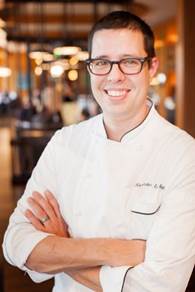 In his new role, Chef La Motte will use his extensive experience to tailor the hotel’s culinary program to reflect his signature modern American style, while continuing Lotte’s tradition of curating upscale menus that utilize seasonal, local ingredients.

Prior to joining Lotte Hotel Seattle, Chef La Motte served as the executive chef of Hotel Californian, where he helped to create and implement each of the hotel’s unique dining concepts exhibited at its restaurants Blackbird and The Goat Tree. Chef La Motte’s introduction to the hospitality industry came with his roles as executive chef of the Four Seasons Hotel Westlake Village, and later at the Four Seasons Hotel San Francisco. Previously, Chef La Motte acted as sous chef at the renowned DB Brasserie in Las Vegas where he helped the team achieve a Michelin star rating in both 2007 and 2008.

Chef La Motte began his career as a sous chef for the Orpheum Grand Lobby Restaurant in Madison, Wisconsin, after graduating from the University of Wisconsin-Madison with degrees in Biological Conservation and Environmental Studies. In 2004, Chef La Motte graduated with honors from The Culinary Institute of America.

For more information on LOTTE HOTEL SEATTLE and to book a reservation at Charlotte Restaurant & Lounge, please visit www.lottehotel.com/seattle.

Lotte Hotels & Resorts is the largest hotel group in Korea. The brand has recently expanded into other parts of the globe with locations including the United States, Vietnam, Japan and Russia. The newest addition to the Lotte portfolio is Lotte Hotel Seattle, which will debut in September 2020. The group focuses on providing exquisite service and top-quality cuisine in iconic destinations around the world.

LOTTE HOTEL SEATTLE is prominently situated along the business district of downtown Seattle, just minutes away from the city’s famous tourist attractions. Boasting an artistic yet modern design, the 189-room LOTTE HOTEL SEATTLE is where the present and the past co-exist. The hotel features extensive facilities, such as a cocktail lounge and signature restaurant, Charlotte Restaurant & Lounge, that offer spectacular views of the Pacific Northwest from the highest floor of the hotel, as well as a world-class spa, Le Spa de l’hôtel LOTTE. A prime destination for elegant events and weddings, the hotel also houses the nation’s oldest Beaux-style architectural building founded in 1908, The Sanctuary, in addition to a selection of meeting spaces for events of all sizes.