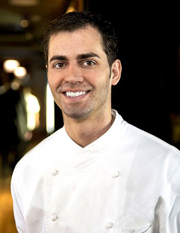 (CHICAGO, Ill.; December 3, 2015) – LondonHouse Chicago (85 E. Wacker Dr.), Oxford Capital’s latest luxury lifestyle hotel opening spring 2016, is pleased to announce Riley Huddleston as Executive Chef and Beverage Director. In these roles, he will oversee and lead the entire culinary and beverage program and operations for the Chicago property and its chef-driven dining establishments.

“It’s exciting to be a part of such a smart and collaborative executive team and have the opportunity to contribute to the property’s overall brand positioning. The goal is to intertwine the hotel services with all its different amenities and dining outlets,” stated Huddleston. “This format is atypical of most hotels and our concept will stay true to the history and character surrounding the hotel and location, while adding in little touches that set it apart and enhance the guest’s experience.”

A native of Oregon, Huddleston has spent more than a decade in the culinary community, gaining a unique mix of experience in roles as a chef, mixologist, pastry chef, and restaurateur. His career in the food industry began by launching and co-owning Boise Fry Company, a French fry-focused fast casual restaurant concept that won “Best Fries” accolades from Travel + Leisure and U.S. Travel News. Soon after, he moved on to culinary positions in acclaimed restaurants across the country, including Gramercy Tavern and Tribeca Grill in New York. He introduced the mixology component to his resume when he joined the menu development team at the Aviary, the famed Grant Achatz cocktail concept. Most recently, Huddleston was the opening Executive Chef for I|O at The Godfrey Hotel Chicago, the city’s largest all-season indoor | outdoor hotel rooftop lounge on the lifestyle hotel’s fourth floor. There, he produced upscale bar fare to pair with his chef-driven cocktail program that uses scientific methods to create specialty drinks.

Huddleston’s innovative culinary style blends classic French training with modern cooking techniques. He draws on his eclectic mix of experiences to build creative menus that focus on the best produce and ingredients available from around the world. In conjunction with the hotel’s amenities, his dining establishments will pay homage to the building’s history via re-imagined American cuisine.

All dining outlets will open along with LondonHouse Chicago in spring 2016. LondonHouse is located in Chicago’s historic London Guarantee Building at 360 N. Michigan and the new 22-story architecturally synchronized LondonHouse tower at 85 E. Wacker Dr. The property is situated on what was once the historic Fort Dearborn. For more information on the hotel, please visit LondonHouseChicago.com.

Opening in spring 2016, the full-service LondonHouse Chicago hotel offers 452 luxury guest rooms and suites featuring scenic views of North Michigan Avenue and Wacker Drive, the Chicago River and many other city landmarks. Hotel amenities include Chicago’s only tri-level rooftop featuring private dining spaces, an indoor bar, outdoor rooftop terrace and private top floor Cupola, a chef-driven restaurant and lobby bar, retail outlets and 25,000 square-feet of meeting and event space including two ballrooms for social dinners and weddings of up to 300 guests, or receptions for 350 or more. Additional features include a full service spa, 24-hour fitness center and state-of-the-art-technology. LondonHouse Chicago is affiliated with the Curio Collection Hotels by Hilton Worldwide. Guests also have the added benefit of earning and utilizing Hilton HHonors® points during their stay. For information visit londonhousechicago.com

Curio – A Collection by Hilton (curiocollection.com) is a global collection of distinctive hotels that are woven into the fabric of their destinations. While each one is unique, they are united in their individuality. Curio guests are passionate travelers seeking local discovery and authentic experiences, while resting easier knowing the Hilton name is behind every stay. Curio joins a portfolio of market-leading brands from Hilton Worldwide, a leading global hospitality company. Access the latest news at news.curiocollection.com or inquire about development opportunities at hiltonworldwide.com/development.