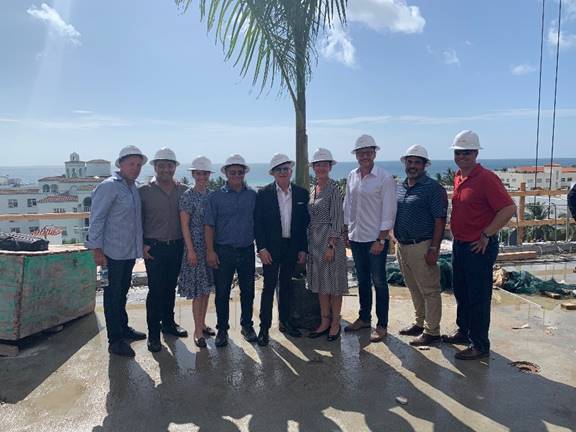 MIAMI, August 23, 2019 – National real estate investor and developer Lightstone announced today the topping out of construction at Moxy South Beach, which is scheduled to open in Fall 2020.  The 202-key, eight-story hotel, located at 915 Washington Ave. marks Lightstone’s fourth Moxy Hotel development in partnership with Marriott and the company’s first Moxy property outside of New York.

With interiors designed by Rockwell Group and architecture designed by Kobi Karp, Moxy South Beach will span 78,000 gross square feet. Its lobby will feature an outdoor courtyard that threads together a series of spaces, including a restaurant; all-day bar; Cuban-themed bodega offering stylish beach accessories; and a co-working lounge which transitions into meeting studios. The second floor will feature a 72-foot pool, fitness center, and indoor/outdoor bar and café. The rooftop offers breathtaking views of Miami Beach, a large shallow pool to cool off in, and a screening area. Moxy South Beach will offer multiple vibes, all under one roof. Local DJs and live music will activate the lobby bar and pool area. Additionally, fitness partners will host morning rooftop workouts for the complimentary #SweatAtMoxy wellness series.

“We’re excited to be bringing Moxy to Miami on the heels of successful openings at Moxy Times Square and Moxy Chelsea,” said Mitchell Hochberg, president of Lightstone. “We’re confident that the Moxy ethos will resonate with both the Miami traveler and local residents.”

Moxy South Beach adds to Lightstone’s growing hotel development portfolio, which includes over 1,500 Moxy hotel rooms in New York City, including the 612-room property in Times Square that opened in the Fall of 2017, a 349-room Moxy Hotel in Chelsea, and the upcoming Moxy East Village, a 286-key hotel opening in September 2019. The company is developing a total of seven Moxy properties in New York, Miami, and Downtown Los Angeles.

G.T. McDonald Enterprises is serving as construction manager on the project, and the hotel will be operated by Urgo Hotels & Resorts.

Lightstone, founded by David Lichtenstein, is one of the largest and most diversified privately held real estate companies in the United States. Lightstone is active in 28 states across the country, developing, managing and investing in all sectors of the real estate market, including residential, hospitality, commercial, and retail. With over 178 existing properties, Lightstone’s over $6.5 billion portfolio currently includes over 4.5 million square feet of office, retail and industrial commercial properties, over 15,000 residential units, and over 43000 hotel keys. Lightstone also owns over 12,000 land lots across the country.