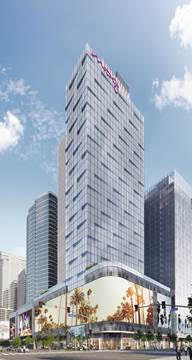 LOS ANGELES – September 10, 2021 – National real estate investor and developer Lightstone, today announced the topping out of construction on the dual-branded Moxy Los Angeles Downtown and AC Hotel Los Angeles Downtown. The property is located in the heart of Downtown Los Angeles, directly across the street from the LA Convention Center and Staples Center, on the corner of West Pico Boulevard and Figeroua Street.  Scheduled to open in late 2022, the 37-story, 600,000-square-foot mixed-use tower will consist of a dual-branded, 380-room Moxy hotel and a 347-room AC hotel. The property will also include over 22,000 square feet of premium digital and static signage, featuring the largest continuous full-motion digital display on the West Coast, and over 8,000 square feet of ground floor retail space.

With 65,000 square feet of meeting rooms, restaurants, bars, and nightlife throughout, the Moxy and AC hotel will become a central entertainment and cultural hub within this vibrant central Downtown neighborhood. The development will feature a 6,000-square-foot landscaped pool deck and an unprecedented offering of 12 all-new restaurant and bar concepts designed by Basile Studio. On the 34th floor, AC’s sky lobby will feature a garden-like terrace bar with panoramic views overlooking Downtown Los Angeles. The hotels will boast 13,000 square feet of meeting space also designed by Basile Studio.

“Today’s topping out represents an exciting milestone for our growing hospitality portfolio and we are thrilled to bring the Moxy and AC Hotel brands to Downtown LA on the heels of successful openings in New York City and Miami,” said Mitchell Hochberg, President of Lightstone. “Offering two unique experiences at one address, coupled with an unparalleled slate of shared programming, we are confident both brands will resonate with visitors to the Convention Center and Staples Center and locals alike.”

Moxy and AC Hotel Los Angeles Downtown adds to Lightstone’s growing hotel development portfolio, including the 612-room flagship Moxy Times Square property that opened in the Fall of 2017, 350-room Moxy Chelsea that opened in February 2019, and the Moxy East Village, a 286-room hotel that opened in September 2019. Earlier this year, Lightstone debuted its first Moxy property outside of New York with the opening of Moxy Miami South Beach. The company‘s portfolio will include a total of seven Moxy properties, with Moxy Lower East Side and Moxy Williamsburg scheduled to open in 2022 in New York. To learn more, please visit www.lightstone.com

Lightstone is one of the most diversified privately held real estate companies in the United States. Active in 24 states across the country, Lightstone develops, manages and invests in all sectors of the real estate market, including residential, hospitality, commercial, and retail. With 132 existing properties nationwide, Lightstone’s over $6.5 billion portfolio currently includes over 4 million square feet of industrial, retail, and commercial properties, over 15,000 residential units, and 4,300 hotel keys.

Moxy Hotels is Marriott International’s new millennial-focused brand that debuted in September 2014 with the opening of the Moxy Milan. A boutique-hotel concept for the next-Gen traveler, Moxy is a fresh and innovative brand combining stylish design and approachable service at an affordable price point. With tech-enabled rooms, vibrant lobby spaces and warm, modern service, Moxy aims to surprise travelers with a thoughtful, spirited and fun guest experience.

About AC Hotels by Marriott 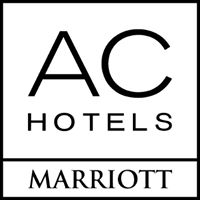 AC Hotels by Marriott celebrates the beauty of classic modern design with its European soul and Spanish roots. Born from the entrepreneurial spirit of renowned hotelier Antonio Catalan, AC Hotels and Marriott formed a joint venture in 2011. The brand offers concept-driven, turn-key customization of guest room and public space design. With flexible open spaces, purposeful design, signature moments and no unwanted extras, guests maximize their stay with style and intention.