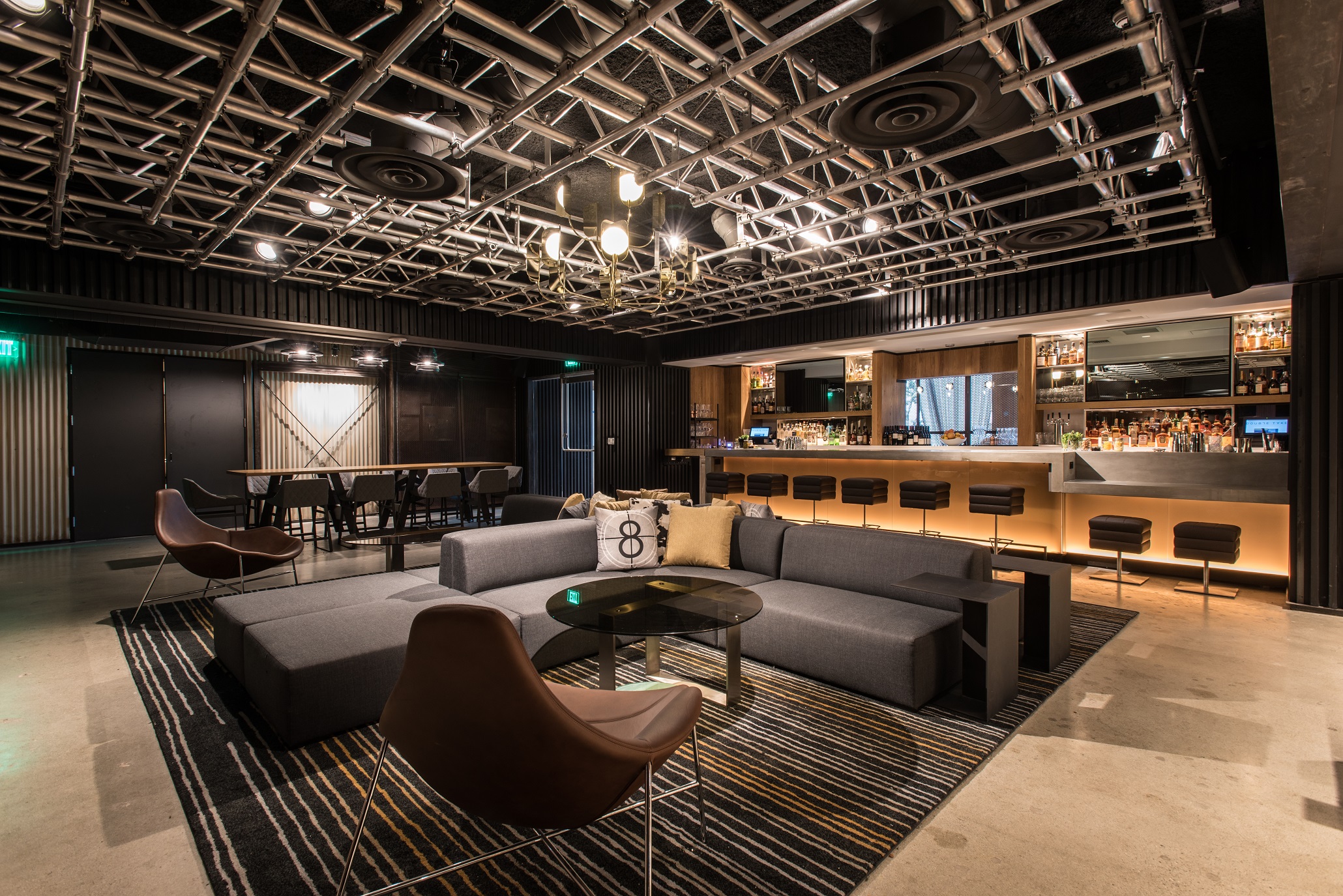 Hotel Palomar Los Angeles – Beverly Hills’ new look is a striking juxtaposition of inviting warmth and artistic intensity, emotion and intellect, authenticity and the excitement of bringing film magic to life. Natural scrapped woods wrap the lobby’s ceilings, walls and floors providing a welcoming cocoon for guests while raw steel panels, sculptures of welded metal scaffolding repurposed from studio soundstages and rusted perforated screens pay tribute to the behind-the-scenes grit of film’s unsung heroes. A sliding screen off the lobby reveals a stylish vignette, a semi-private media space outfitted with sophisticated seating and a sculptural light fixture evocative of the flashing lights of the paparazzi.

Anchoring scenes in the revamped guest rooms are black and white murals, a futuristic interpretation of the film industry and photography alongside modern and minimalistic furnishings in shades of black, white and gray with popping red accents.

A circular fireplace inspired by a camera lens sets the stage upon entering the hotel and frames the intimate residential-like lobby. The entry area flows seamlessly into the adjacent lounge where black corrugated steel walls, raw concrete floors, and a soundstage ceiling rigged with truss and pipe give the space a sultry ambiance and set the scene for the action within. A multitude of open seating options creates a social environment allowing guests to effortlessly transition between meals, work, meetings and fun. Connected to the lounge is a lively game room with playful diversions such as a dartboard, shuffleboard table, pool table, Skee Ball, video games and dual 4K Ultra HD TVs. The hotel’s eight flexible event spaces, totaling 5,000 sq. ft., have been redesigned to shine including the newly expanded Premiere Ballroom with doors that open to the adjacent game room. Double Take, the hotel’s dynamic new restaurant, lies just beyond and is separated by a rolling 14-foot backdrop of an 8,000-lb. gorilla, a nod to the ever-watchful eye of the big studios.

San Francisco-based Kimpton Hotels & Restaurants is a leading collection of boutique hotels and restaurants and the acknowledged industry pioneer that first introduced the boutique hotel concept to the United States. In 1981, Bill Kimpton founded the company that today is renowned for making travelers feel genuinely cared for through thoughtful perks and amenities, bold, playful design and a sincerely personal style of guest service. Out to help people live full, balanced lives, Kimpton aims to inspire with touches like yoga mats in every room, complimentary coffee and tea to start the day, hosted evening Wine Hour, in-room fitness programming and complimentary bike rentals. The award-winning restaurants and bars are led by talented chefs and bartenders that offer guests a chance to dine like a local.

Kimpton is consistently ranked as one of the top companies in the Market Metrix Hospitality Index, Upper Upscale Segment, for Customer Satisfaction. The company is highly-regarded for its innovative employee culture and benefits and has been named a FORTUNE magazine “Best Place to Work” seven times since 2009. Kimpton is continuously growing and currently operates over 60 hotels and 70 plus restaurants, bars and lounges in 30 U.S. cities. In January 2015, Kimpton was welcomed into the InterContinental Hotels Group (IHG) family of hotel brands, bringing together two special cultures and sets of values to create the world's largest boutique hotel business. For more information, visit www.KimptonHotels.com.