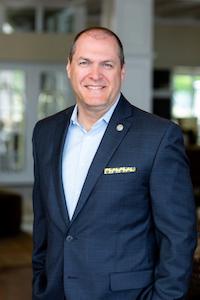 DEL MAR, Calif. – L’Auberge Del Mar, managed by Noble House Hotels & Resorts, has named Robert Gregson – a 25-year hotel industry veteran most recently with The Sydell Group – its new general manager. In his new role, Gregson will be responsible for the day-to-day operations for the 121-room oceanfront property.

“We’re pleased to have Bob join our talented team,” says Robert Harter, director of sales and marketing for the resort. “We’re looking forward to his leadership and vision, and are confident his extensive expertise will be invaluable as we continue to provide our guests with the best service and luxurious experience in Southern California.”

According to Dave Danieli, Senior Vice President Asset Management for Pebblebrook Hotel Trust, which assumed ownership of L’Auberge Del Mar last year, Gregson is the ideal candidate to run the popular coastal hotel. “Bob will be instrumental to our efforts as we work to elevate the profile of L’Auberge Del Mar on a national level. He is a hospitality industry leader with the operations background necessary to take this property to even higher levels of excellence.”

Gregson, a recent resident of Studio City, began his hospitality career more than 25 years ago. His most recent position was with The Sydell Group as general manager for The LINE Hotel in Los Angeles where he served on the hotel’s opening team. Prior to that he was director of sales and marketing for Thompson Hotels’ Hollywood Roosevelt Hotel. Other properties he worked at include W Hollywood & Residences; Hard Rock Hotel & Casino, Las Vegas; and Mondrian, West Hollywood.

He holds a bachelor’s degree in business management from California State University, Chico.