For this edition of STR’s U.S. “bubble” chart update, we returned the focus to revenue per available room (RevPAR), a core indicator of the general financial health of hotel markets. For the four weeks ending 10 September, there was an expected seasonal softening from the mid-summer travel peak. In fact, only six of the 165 STR-defined U.S. markets saw month-over-month RevPAR increases for the period, which included the Labor Day holiday. That holiday typically produces major decreases in industry demand—especially weekday business travel—as well as marks an informal end to summer travel.

Among the U.S. Top 25 Markets, New York City edged out a four-week RevPAR win ($217) over Oahu ($214) at the top of the leaderboard. Of note, NYC was one of just a handful of markets that saw a weekly performance surge for the holiday week, with RevPAR up $55 from prior week. Rounding out the top five were Boston ($175), San Diego ($164) and Los Angeles ($148). When comparing these top markets to their matched performance weeks of 2019, only San Diego’s RevPAR was on a pace that surpassed inflation-adjusted benchmarks, with an index value of 111 (or 11% above 2019). That was followed by Oahu (92), Boston and Los Angeles (both 91), and finally New York (86).

On the lower performing end of large markets, Houston’s inflation indexed RevPAR value was 83 for the four weeks, while New Orleans (78) was even lower. Phoenix (103), one of the smaller markets in the group, outperformed its matched weeks of 2019 even after accounting for recent inflation.

Outside of the Top 25 Markets, leisure-oriented destinations continued to dominate the RevPAR leaderboard. Exceptional average daily rate (ADR) is the primary driver of RevPAR in these leading markets and ranged from $229 in Alaska to $556 in Maui. Nominal (non-inflation adjusted) RevPAR in the Florida Keys was almost double that from 2019 and drops to a still outstanding 173 index with inflation. All smaller leader markets had inflation-adjusted RevPAR indices above 125 for the four weeks.

The data from last four weeks spans a transitional period from summer’s leisure-oriented travel season to autumn’s more traditional business mix of travel/bookings. Industry observers like STR are keen to monitor market performance in the coming weeks to see the level of gains in business travel (both transient and group categories) while economic uncertainty seems to be ramping up.

For more information, be sure to check out our weekly updates in STR’s Market Recovery Monitor. 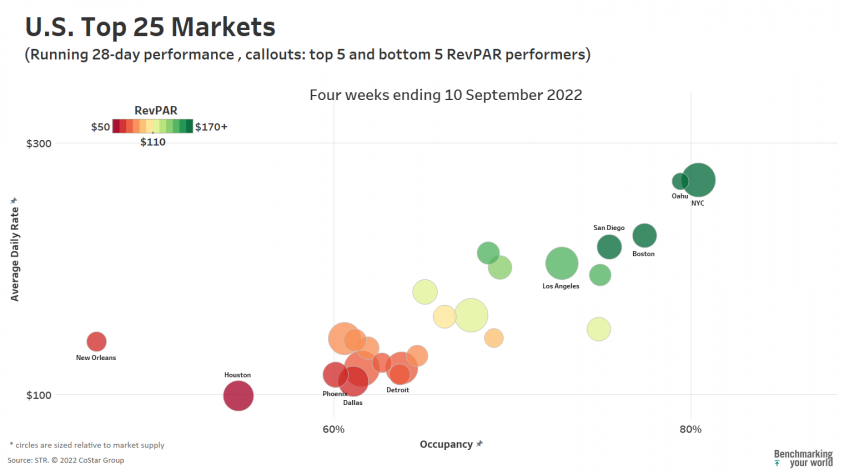