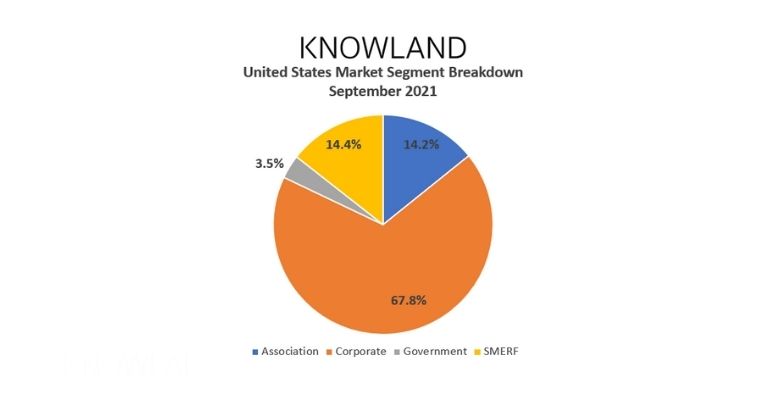 Double-digit growth continues as group demand returns. New metric levels are emerging which may be a result of short-term adjustments during this transitional period or the signaling of a reset of industry KPIs.

•  Average attendees hit highest number since 2013 – The average number of attendees per event in September 2021 was 112, compared to 70 in September 2019. This is the highest this metric has been since 2013, according to Knowland data.

•  Corporate meetings represent the largest market segment – The corporate segment represents 67.8 percent of meeting and event business with the healthcare and technology segments taking the lead as the largest industry segments.

Kristi White, chief product officer, Knowland, said: “While the percentage of growth was not as high as in August, shifts in other metrics show real strength. Average attendees are now not only higher than the same month in 2019 but are higher than the average of 2019 as a whole. Additionally, New York and Washington, D.C., two of the biggest group markets in the world, climbed into the top five growth markets. To see them resurge is a leading indicator that recovery is broadening.”

Knowland is the world’s leading provider of data-as-a-service insights on meetings and events for hospitality. With the industry's largest historical database of actualized events, thousands of customers trust Knowland to sell group smarter and maximize their revenue. Knowland operates globally and is headquartered just outside Washington, DC. To learn more about our solutions, visit www.knowland.com or follow us on Twitter @knowlandgroup.