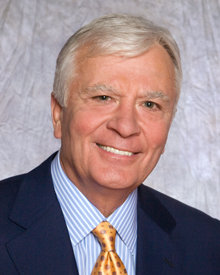 UNIVERSITY PARK, Pa. – Jon Luther, board chairman for Arby’s Restaurant Group, Inc. and retired CEO and board chairman of Dunkin’ Brands, has been named 2015 Hospitality Executive of the Year by the Penn State Hotel & Restaurant Society (PSHRS).

Luther will receive the award during the 53rd Hospitality Executive of the Year award reception, which will take place at the Waldorf Astoria New York on Sunday, November 8, 2015, in conjunction with the annual International Hotel, Motel + Restaurant Show in New York. As part of the honor, Luther also will be inducted into the Penn State Hospitality Hall of Fame, located at The Nittany Lion Inn on Penn State’s University Park campus.

Since 2011, Luther has served as board chairman for Arby’s Restaurant Group, Inc. Additionally, he serves as lead director of the board at Six Flags Theme Parks as well as a member of the board of directors at Brinker International.

“The members of PSHRS are extremely pleased to have Jon Luther as our 2015 award recipient and inductee into our hospitality Hall of Fame, said Lea Ann Kish, president of PSHRS and chief operating officer of Milestone Hospitality Management. “Mr. Luther has an impressive career history that includes the successful transformation of Dunkin’ Donuts among many other accomplishments within the hospitality industry.”

“I am honored to be named the recipient of the prestigious Hospitality Executive of the Year granted by the Penn State Hotel & Restaurant Society,” Luther said. “To be among the luminary hospitality leaders who have received this award is quite humbling.”

Upon joining Dunkin’ Brands in 2003, Luther led the transformation, revitalization and global expansion of the company’s two iconic brands: Dunkin’ Donuts and Baskin-Robbins. Early on, he instituted values-based leadership, resetting the company culture. Under his direction, stores were restyled with exciting, contemporary designs that also honored both brands’ heritage. He has rolled out a portfolio of flexible store formats that opened the door to growth in non-traditional locations, such as stadiums, airports and universities.

In 2005, Luther brought in a culinary “dream team” of award-winning chefs to fuel menu innovation and excellence, creating the new category “quick quality” to change perceptions regarding quick service meals. He improved the company’s research capability with a consumer insights group, and refocused and re-energized the brands’ marketing initiatives, leading to the 2006 launch of Dunkin’ Donuts’ award-winning marketing campaign, “America Runs on Dunkin’.”

Most notably, Luther led the expansion of Dunkin’ Donuts from its core region in the Northeast to key markets across the United States, and the dramatic growth of both brands’ international business. From 2003 to 2009, system-wide sales increased more than 66 percent, total number of stores nearly 44 percent and achieved EBITDA growth of 135 percent. After a successful CEO leadership transition in 2010, Dunkin Brands continued this positive growth and completed a successful public offering in 2011.

Before joining Dunkin’ Brands, Luther was president of Popeyes Chicken & Biscuits, a division of AFC Enterprises. During his six years with Popeyes, the company’s store count grew 67 percent to 1,672 units, while average annual unit volume grew to over $1 million, the highest in the chicken QSR category at the time. With Luther at the helm, Popeyes won industry awards for menu strategy, store re-design and customer satisfaction.

Luther was president of CA One Services, a subsidiary of Delaware North Companies, Inc. He has also held leadership positions in the contract foodservice division of the Marriott Corporation and at ARAMARK in Philadelphia, Pennsylvania, where he rose from vending sales director to become president of Davre’s, ARAMARK’s luxury restaurant subsidiary. Luther also founded Benchmark Services, Inc., a foodservice management firm specializing in business dining for corporations, growing the business into a strong regional competitor.

Luther holds an Associates degree in hotel and restaurant management from Paul Smith’s College, and honorary doctorate degrees from Bentley College, Johnson & Wales University, and Canisius College, as well as from his alma mater, Paul Smith’s College. He supports culinary and foodservice programs at a variety of institutions, including serving on the Board of Trustees for the Culinary Institute of America as vice chairman. Additionally, Luther is the 2012 Past Chairman for the International Franchise Association.

In 2009, Luther received the National Restaurant Association’s College of Diplomates award honoring his lifetime achievement in the restaurant field; and in 2010, Luther was elected into the MenuMasters Hall of Fame. In 2013, he was awarded the Lifetime Achievement Award by the Leadership Roundtable. Luther received the Norman Brinker Award from Nations Restaurant News at the MUFSO Conference in 2013.