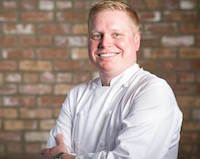 CHICAGO — June 15, 2016 – Conrad Chicago, the highly anticipated 20-story property slated to open this August steps from the famed Magnificent Mile, today announces it has appointed James Lintelmann as Executive Chef of both Baptiste & Bottle and Noyane. In partnership with internationally acclaimed chef and restauranteur Richard Sandoval, who will oversee the culinary program of Conrad Chicago, Baptiste & Bottle is a barrel bar with Great American inspired fare in a comfortable, modern setting and features an extensive bourbon and whiskey selection. Noyane is set to serve contemporary Japanese cuisine while showcasing stunning views of the Windy City from the restaurant’s coveted rooftop.

“We are proud to add such a driven local to the Conrad Chicago family and are looking forward to seeing how James will lead Baptiste & Bottle and Noyane to create a new Chicago culinary destination,” says General Manager Kelly Vohs. “He brings an air of humility coupled with an intense desire to be better today than he was yesterday, which makes him a dynamic chef who will constantly impress you.”

Chef Lintelmann has spent the majority of his culinary career in Chicago, gaining the respect of colleagues and diners alike at local favorites including Charlie Trotter’s, The Lobby, and Boka. Chef Lintelmann also spent time in Napa Valley, California where he worked under the tutelage of Richard Reddington, Chef/Owner of Redd. His time in Northern California heavily influenced his understanding of seasonality and the pairing of food and wine. A graduate of the Culinary Institute of America, Chef Lintelmann received a Bachelor of Professional Studies in Hospitality Management in 2009.

In his new role as Executive Chef of Baptiste & Bottle and Noyane, Chef Lintelmann will be responsible for overseeing both culinary venues and working closely with the Sandoval team to carefully curate the two distinct innovative menus. With a knack for fusing bold flavors from different types of cuisines, he will add a unique touch to the restaurants at Conrad Chicago.

Earning its namesake, Baptiste & Bottle will specialize in bourbon and provisions, serving a classic American menu paired with hearty entrees and sharable plates in an environment that is reflective of bourbon’s true American roots. Additionally, the restaurant will offer a hand-crafted cocktail program with an attentive and unique “shaken, poured, and stirred-at-the-table” mixology philosophy. Patrons will be able to keep a log of the whiskeys they have tried and purchase a locker to house their personal bottles. Groups will find the experience highly entertaining and interactive with impressive tableside barrel-aged cocktail sharing program with one liter barrels.

Noyane will offer a restaurant rooftop experience poised to make a big splash in the city’s social and gastro scenes. Meaning hidden roof in Japanese, Noyane will serve contemporary Japanese cuisine and top-shelf cocktails. Guests will enjoy artfully prepared sushi and sashimi along with decadent Wagyu beef, all while soaking in the stunning views of downtown Chicago. Patrons will quench their thirst with Japanese sakes and beer while ordering from the sharable menu in an environment featuring a soothing aesthetic and Japanese décor.

Imagined by world-renowned designer Pierre-Yves Rochon, Conrad Chicago will be a desired destination for the new generation of modern luxury travelers for whom life, business and pleasure seamlessly intersect. The 287-room hotel features three distinct dining venues, seamless guest service supported by the Conrad Concierge mobile app, and cutting edge technology including keyless room entry and smart guestrooms. With 10,000 square feet of state-of-the-art conference facilities and event spaces coupled with its unmatched location on Magnificent Mile, Conrad Chicago is the ideal location for discerning guests who value the opportunity to immerse themselves in the local destination.

Conrad Chicago will participate in Hilton HHonors®, the only guest loyalty program where guests who book directly through www.conradhotels.com have access to benefits including the digital Conrad Concierge app and complimentary Wi-Fi at 26 Conrad hotels.

To learn more about or connect with Conrad Chicago, please visit www.conradhotels.com/chicago or call +1-312-667-6700.

Conrad Hotels & Resorts is the destination for the new generation of smart luxury travelers for whom life, business and pleasure seamlessly intersect. Conrad offers its guests an innovative way to Stay Inspired through a curated collection of 1,3, or 5 hour experiences, available through www.StayInspired.com or through the intuitive Conrad Concierge mobile app.  Consisting of 26 properties across five continents, Conrad is part of Hilton Worldwide, a leading global hospitality company. Connect with Conrad by booking at www.conradhotels.com.

Richard Sandoval Restaurants (RSR) is a leading restaurant group founded by Mexican-born chef/restaurateur Richard Sandoval. Based in Colorado, RSR is known for offering guests an unparalleled culinary experience. This internationally recognized contemporary Latin restaurant group successfully owns and operates over 40 restaurants around the globe. Spanning from California to New York, Colorado to Florida, Nevada to Virginia and Arizona to Washington, D.C. – as well as from Dubai to Mexico, Qatar and Serbia – Chef Sandoval’s “made from scratch” approach and passion for introducing Latin cuisine to the world continues to inspire him to combine international flavors and inventive techniques to create one-of-a-kind concepts and cuisines that include modern and coastal Mexican, European, Latin-Asian, Peruvian and Pan-Latin. For a complete list of Richard Sandoval Restaurants, menus or more information, visit richardsandoval.com.