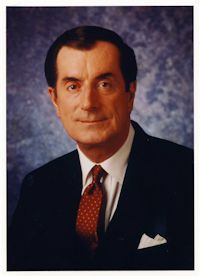 Much will be written and spoken since word reached all of us last week of the passing of hotel icon Jack Vaughn.

It was Jack, along with his partner-in-crime Mike “Shiny” Dimond (Mike “Shiny” Dimond: One of the Great Hotel Sales Impresarios / David M. Brudney / June 2008) who put Opryland Hotel – – and Nashville, for that matter – – on the map as a meetings and conventions destination and industry in the mid-’70s.

I will leave it to others to write about Jack’s bold vision, industry contributions, and the long list of honors and awards garnered over an illustrious half-century career.

This tribute to Jack, instead, will be a very personal one – – one that dates back to the mid-’60s when we first soldiered together as young, up-and-coming “Western cadets” (Westin, the former Western International Hotels) at the Century Plaza Hotel in West Los Angeles.

Jack was Century Plaza’s rooms director when I joined the sales team as a rookie sales manager shortly after the hotel’s opening in May 1966. My annual salary was only $700 a month. I couldn’t believe Jack’s was just $50 a month more than mine.

I’ll never forget one Monday we were bemoaning how little we were making. He told me how troubled he was the day before when during one of his rare day’s off, he didn’t have a dime to buy one of his kids an ice cream bar on a Sunday family outing.

I didn’t learn until years later that even back in those early years Jack was a master at getting things done and finishing key projects. Jack was the point man in meetings with the White House Secret Service during the Century Plaza’s final construction stage. Jack used their invaluable feedback to customize the entire penthouse floor that paved the way for multiple visits by President Lyndon Johnson and all future presidents and numerous heads-of-state.

Jack’s name was golden within the ranks of the Secret Service. I found that out first hand when during a future sales trip to D.C. I called one of the agents and using Jack’s name got a one-of-a-kind “inside” tour of the White House.

Jack was promoted to Hotel Manager at Chicago’s Continental Plaza (now the Westin Michigan Avenue Hotel) in 1969. We weren’t separated for long as I was promoted to director of sales there a year later. Jack was busy again after I arrived working on a plan to double the size of the hotel after acquiring the building next door.

No matter where his work took him, Jack was always thinking big. The Continental Plaza’s sales office was – – to be kind – – very much of an afterthought. It was more of a large closet or storeroom than an office. The DOS desk was located at the far end of the room with the ceiling shortened by three feet or more because it was directly under a stairwell. Water pipes ran across the ceiling amassing directly above my desk. The sounds from those pipes brought many a laugh, in particular, when a client was present. Jack would tell me often, “If I had my way, the DOS office would occupy one of our corner suites overlooking No. Michigan Avenue.”

Ironically, it took Opryland to finally provide him with the opportunity for those brash, outside the box, big thinking ideas and vision to become a reality.

My consulting society presented Jack with the 1999 ISHC Pioneer Award. In accepting, he was the same self-effacing, limelight deflecting, and no nonsense hotel soldier I remembered from the ’60s.

Yes, at times his language and mannerisms could be a bit coarse and maybe inappropriate. He reminded me of crime novelist Mickey Spillane’s Mike Hammer – – a hard charging, two-fisted, heavy-smoking, and coffee-guzzling ex-Marine who never forgot who he was nor from where he came.

We saw each other at Shiny Dimond’s memorial service six years ago. I could see then the suffering from his years of back pain. The last time we met was over lunch four years ago in Las Vegas. I sensed then his life was coming to an end.

Jack Vaughn was a good friend and trusted colleague who always had my back. I was proud to have soldiered twice with him in my now 50-year hotel career. I speak for many others when I say I will miss him dearly.