ISHC to Honor Wing T. Chao With the Pioneer Award at ALIS

Home/ISHC to Honor Wing T. Chao With the Pioneer Award at ALIS

ISHC to Honor Wing T. Chao With the Pioneer Award at ALIS 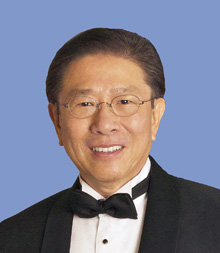 Los Angeles (31 October 2017): The International Society of Hospitality Consultants (ISHC), in partnership with the Americas Lodging Investment Summit (ALIS), is proud to present Wing T. Chao with the 2018 Pioneer Award, an award established in 1996 to recognize individuals who have made an outstanding contribution, achievement and or improvement in the hospitality industry.

Chao began his career at Disney in 1972 and went on to become Vice Chairman of Development for Walt Disney Parks & Resorts, Asia Pacific. He was also Executive Vice President for Master Planning, Architecture & Design at Walt Disney Imagineering.

Stephen Hennis, ISHC Pioneer Award Chair, commented, “As ISHC celebrates its 30th anniversary in 2018, we wanted to honor an individual known for innovation in hospitality. Wing T. Chao without a doubt has had an incredible career and brought to life inconceivable ideas through his work at Disney that will impact generations to come. Wing is still actively contributing to the hospitality industry and continues to drive innovation. We are honored to present him with the ISHC Pioneer Award at ALIS.”

Chao is greatly admired in the hospitality industry and he is highly respected in the architecture and design community. He has received numerous awards and accolades for his achievements including, but not limited to, the American Institute of Architects' Outstanding Achievement Award and the Legend Award by Contract Magazine, the leading publication for the commercial design industry.

The International Society of Hospitality Consultants is truly The Leading Source for Global Hospitality Expertise, represented by over two hundred of the industry’s most respected professionals from across six continents. Collectively, ISHC members provide expert services in over fifty functional areas and have specialized skills in virtually every segment of the hospitality industry. ISHC is dedicated to promoting the highest quality of professional consulting standards and practices for the hospitality industry. Candidates undergo a rigorous screening process, ensuring that all ISHC members have a reputation of integrity and are qualified by their experience, training and knowledge to develop and express sound judgment on industry issues. Additional information about the organization, along with a directory of ISHC members, is available on the ISHC website at ishc.com.

Serving the hospitality industry for more than a century, the American Hotel & Lodging Association (AHLA) is the sole national association representing all segments of the 8 million jobs the U.S. lodging industry supports, including hotel owners, REITs, chains, franchisees, management companies, independent properties, bed and breakfasts, state hotel associations, and industry suppliers. Headquartered in Washington, D.C., AHLA focuses on strategic advocacy, communications support, and educational resources for an industry that advances long-term career opportunities for employees, invests in local communities across the country and hosts more than one billion guests’ stays in American hotels every year. AHLA proudly represents a dynamic hotel industry of more than 54,000 properties that supports $1.1 trillion in U.S. sales and generates nearly $170 billion in taxes to local, state and federal governments. Learn more at www.AHLA.com.

BHN is the worldwide leader in developing and organizing conferences for the hotel and tourism investment community. With over three decades of experience, more than 150 events completed to-date, and in excess of 100,000 international delegates, BHN conferences have become “must attend” events for industry leaders who come together to network, conduct business, and to learn about the latest trends. BHN events include: the Americas Lodging Investment Summit (ALIS) in Los Angeles; ALIS Law in Los Angeles; ALIS Summer Update; Alternative Ownership Conference Asia Pacific (AOCAP) in Singapore; Caribbean Hotel & Resort Investment Summit (CHRIS) in Miami; Hotel Investment Conference Asia Pacific (HICAP) in Hong Kong; HICAP UPDATE in Singapore; Hotel Investment Forum India (HIFI) in Mumbai; Hotel Opportunities Latin America (HOLA) conference in Miami; and Hotel Investment Conference Europe (Hot.E) in London. The BHN website at www.Burba.com is the gateway for information about the conferences BHN produces, as well as a direct link to important players in the hospitality investment world. BHN is a division of Northstar Travel Group.