International Visitors Spent More Than $21B in July

Home/International Visitors Spent More Than $21B in July

International Visitors Spent More Than $21B in July 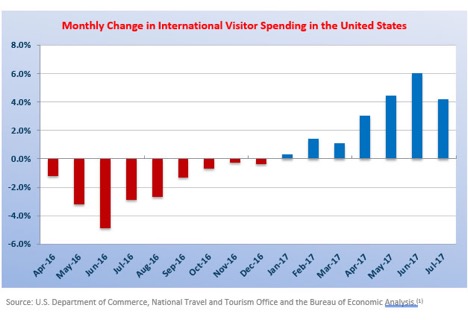 WASHINGTON – Today, U.S. Secretary of Commerce Wilbur Ross announced that international visitors spent an estimated $21.2 billion on travel to, and tourism-related activities within, the United States during the month of July, an increase of more than 4 percent when compared to July 2016.

Travel and tourism-related exports have exhibited growth each month of 2017.

“It is a pleasure to announce that international visitors spent more in the United States in 2017 than any other period in history, and that if this trend continues 2017 will be a record setting year,” said Secretary Ross. “The Trump Administration is unequivocally committed to ensuring that United States continues to be a premier destination for visitors from around the globe.”

International visitors spent nearly $146.3 billion on travel and tourism-related goods and services year to date (January through July 2017), an increase of 3 percent when compared to 2016.

“It is clear that the United States travel and tourism industry remains a strong engine for growth and job creation,” continued Secretary Ross. “This proves that international travelers know that the safety enhancements introduced by the Trump Administration are far more important than the processing inconveniences from them.”

The growth of visitor spending in the United States during 2017 reverses the drop in 2016 when monthly U.S. travel and tourism exports, as well as international arrivals, declined for nine consecutive months (April 2016 through the end of the year.)

(1) In June 2014 the Bureau of Economic Analysis (BEA) completed the most comprehensive restructuring of the U.S. international economic accounts since 1976 in an effort to bring our international accounts into closer conformity with international guidelines. As a result, BEA now uses a broader definition of travel that includes education-related and health-related travel and expenditures on goods and services by border, seasonal, and other short-term workers. Therefore, all travel and tourism-related trade data have been revised back to 1999. To learn more, please visit:http://travel.trade.gov/pdf/restructuring-travel.pdf

NTTO is responsible for collecting, analyzing, and disseminating international travel and tourism statistics for the U.S. Travel and Tourism Statistical System. For more monthly travel and tourism-related trade data dating back to 1999, please visit the NTTO site at: http://travel.trade.gov/outreachpages/download_data_table/Monthly_Exports_Imports_Balance.xlsx.