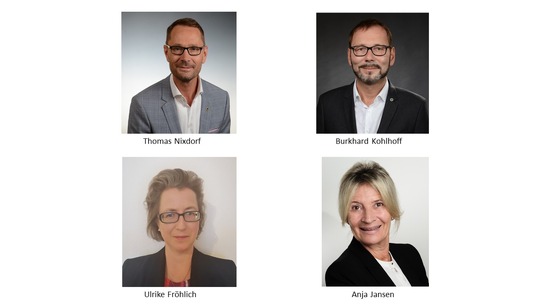 The IntercityHotel Kiel will be managed by Anja Jansen with effect from 1 October 2019. Her previous stations included the Renthof in Kassel. Essen-born Ms. Jansen has also worked for renowned national and international hotels on Mallorca and Cran Canaria as well as in Hamburg and Frankfurt during the course of her career.

Ulrike Fröhlich has been appointed new Director of the IntercityHotel Hamburg Hauptbahnhof and will also take up her position on 1 October 2019. Ms. Fröhlich has, in fact, been familiar with her new place of work since 2006. After completing training as a hotel specialist, she went on to work there as Deputy Manager and Head of Reception. She has also been employed at the IntercityHotel Freiburg and in the last years Fröhlich worked as General Manager at the IntercityHotel Kiel. She also has experience in various positions at Maritim and in the private hotel industry.

Burkhard Kohlhoff was appointed General Manager of the IntercityHotel Hamburg Hauptbahnhof as long ago as 2011. As of 1 October 2019, he will be taking up the reins at the IntercityHotel Hamburg Dammtor-Messe. Hamburg-born Mr. Kohlhoff had previously already been based in the city during the period when he was responsible for Regional Sales at Vila Vita Hotels. He is able to look back on a long career in the hotel sector, which has included stints at Ramada Renaissance, Crowne Plaza, Holiday Inn and Dorint Hotels in Hamburg, Munich and Regensburg. Most recently, he was named “General Manager of the Year” by IntercityHotel this year.

The IntercityHotel Hamburg Dammtor-Messe opened for business in 2014 under the management of Thomas Nixdorf, who began his career as a General Manager at IntercityHotel when the IntercityHotel Hannover launched. Mr. Nixdorf originally trained as a hotel specialist at the Central Hotel Kaiserhof Hannover. He subsequently became Night Auditor at the Quality Inn Hotel Plaza Hannover before moving on to become a Sales Representative at the same hotel in 1991. After a rebranding Nixdorf took over in the team Hotel Plaza the position of the Front Office Manager and from 1994 in addition to the Resident Manager. In 1996 he was appointed General Manager. In 2012, Nixdorf received the “General Manager of the Year” award from IntercityHotel. He will head up the pre-opening phase at the IntercityHotel Hannover Hauptbahnhof Ost with effect from 1 October 2019.

IntercityHotel is a Deutsche Hospitality brand which stands for modern upper mid-range urban hotels. IntercityHotels are located within easy walking distance of airports or railway stations. Guests also benefit from a “FreeCityTicket” scheme, which enables them to use local public transport free of charge. The IntercityHotels portfolio includes 40 hotels in Germany, Austria, the Netherlands, Oman and China, and 20 further properties are currently at the development stage. Deutsche Hospitality operates four further brands. Steigenberger Hotels & Resorts boast 60 hotels housed in historic traditional buildings and lively city residences and also offer health and beauty oases set at the very heart of nature. MAXX by Steigenbergeris a new and charismatic concept which places the focus on the essential in accordance with its motto “MAXXimize your stay”, whilst Jaz in the Citybranded hotels reflect metropolitan lifestyle and draw upon the local music and cultural scene. Zleep Hotels provide quality and design at an affordable price in Denmark and Sweden.