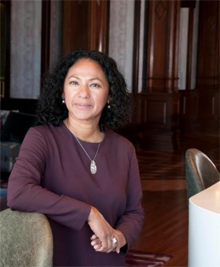 VICTORIA, May 19, 2016: Indu Brar, the new general manager of Fairmont Empress, is the first female general manager of the property since its opening in 1908. She will oversee the iconic hotel's two-phased $30+ million renovation plan that will be completed in June 2017 and includes all guestrooms, restaurants, lobby, Willow Stream Spa and meeting space.

Brar was raised in Calgary and got hooked on the hotel business with her first job – on the switchboard at the Chateau Airport hotel. She worked her way up the hotel ladder with progressive positions and in 1997 became the director of rooms at what is now Fairmont Hotel Macdonald, followed by Fairmont Chateau Lake Louise. She was promoted to director of operations in 2003 and, in 2007 became the general manager of Fairmont Winnipeg.

In 2010, she moved to New York as hotel manager at The Plaza, a Fairmont Managed Hotel for a year and a half before heading to Boston as general manager of the Fairmont Battery Wharf.

In 2013, the west coast called and she took on the role of general manager at the Fairmont Waterfront where she oversaw the hotel's renovation guestrooms, meeting rooms, and restaurant.

Fairmont Empress – An Iconic Restoration The Fairmont Empress has embarked on a comprehensive restoration project that will see the iconic property transformed into an elegant must-visit destination for the world's elite travelers. Phase One will launch in June 2016 with the grand opening of Q at the Empress-a bold new restaurant and bar, a sophisticated lobby lounge, expanded Fairmont Gold with terrace overlooking Victoria's Inner Harbour, an expansive and glamorous Royal Suite and 235 lavish guest rooms. Phase Two will feature a spectacular new lobby, renovated health club and spa, renewed public spaces and the remaining 229 guest rooms to be completed June 2017. The 30+ million dollar rebirth celebrates both the history and the natural beauty of the West Coast, while moving Fairmont Empress into a new era of modern luxury.

Fairmont Hotels & Resorts connects guests to the very best of its destinations, providing travelers withmemorable travel experiences, thoughtful and attentive service and luxury hotels that are trulyunforgettable. Each Fairmont property reflects the locale's energy, culture and history through locallyinspired cuisine, spirited bars and lounges and distinctive design and decor. With more than 70 hotelsglobally, and many more in development, the Fairmont collection boasts some of the most iconic hotels inthe world, including The Plaza in New York, The Savoy in London, Fairmont Peace Hotel in Shanghai andFairmont Le Château Frontenac in Québec City. Fairmont is owned by FRHI Hotels & Resorts, a leadingglobal hotel company that operates more than 130 hotels and branded residential properties under theRaffles, Fairmont and Swissôtel brands. For more information or reservations, please visit fairmont.com.