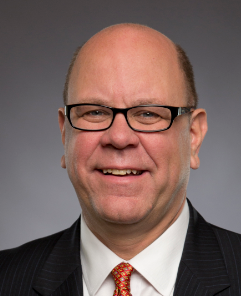 Chicago, IL – June 12, 2018 – The Illinois Hotel & Lodging Association (IHLA) has named Sheraton Grand Chicago General Manager Mark Lauer a 2018 Hospitality Awards Honoree as an Ambassador of Hospitality Award Recipient. The well-deserved recognition was bestowed upon Lauer at a recent luncheon where he was honored alongside several other colleagues.

ILHA applauded Lauer for being intellectually curious and driven by team wins, rather than individual success. One of his most outstanding traits is his ability and desire to mentor and guide future leaders of the hospitality industry; a priority and innate passion of Lauer’s. He continually leads by example and reinforces the idea that good leadership requires self-knowledge, awareness, and an individual leadership style.

“One of Mark’s mantras is: You are judged by the team you build. With this in mind, we know Mark as a great leader with the ability to motivate and inspire in any situation. Since the beginning of his career in 1980, he has brought passion for the industry that is evident by the long list of organizations which he has lent his time and expertise to throughout his career,” said ILHA President and CEO Marc Gordon.

In his current position, he oversees all of the finance, sales, and marketing operations at the 1,200-plus room Sheraton Chicago in the heart of downtown Chicago. Throughout his career, which began at Chicago Downtown Marriott in 1981, he has held several leadership roles including Director of Marketing and Hotel Manager at Waldorf Astoria New York and as General Manager at the New York Hilton Midtown. Mark received his degree from Loyola University in Chicago. From Salt Lake City to San Francisco, Seattle and Omaha, Lauer has a proven track record and a wealth of experience that go into making him the exceptional leader he is today. His passion for the industry is evident by the long list of organizations which he lent his time and expertise to throughout his career. He has served as a board member for many hospitality-related organizations throughout his career. Currently Lauer sits on the board of directors for both IHLA and Choose Chicago, in addition to being on the HELRA executive committee and on the board of advisors at DePaul University Hospitality School.

About The Sheraton Grand Chicago

The Sheraton Grand Chicago, which is ideally situated on the Chicago River within walking distance of Navy Pier, fabulous Michigan Avenue shopping, Millennium Park, the Loop business district and more, has long been a Windy City favorite based on its location alone.  The hotel’s 1,218 guestrooms and suites are now completely  renovated, boasting spectacular river, lake and skyline views, alongside Sheraton’s ultra-comfortable Sweet Sleeper(SM) bed; outstanding accommodations to compliment the hotel’s fantastic location. For more information and photos of the Sheraton Grand Chicago please visit www.sheratonchicago.com

About The Illinois Hotel & Lodging Association

The Illinois Hotel & Lodging Association (IHLA) is a not-for-profit, 501(c)(6) trade association that represents the lodging industry in Illinois. IHLA members consist of over 500 hotels and their employees throughout the state as well as related industry partners and suppliers. IHLA provides significant benefits to its members by:

Advocating the industry's position on political, legislative, and regulatory issues that have the potential to impact the success of Illinois hotels

Recognizing hotel employees for their outstanding accomplishments, service, and leadership in the Illinois hospitality and lodging industry