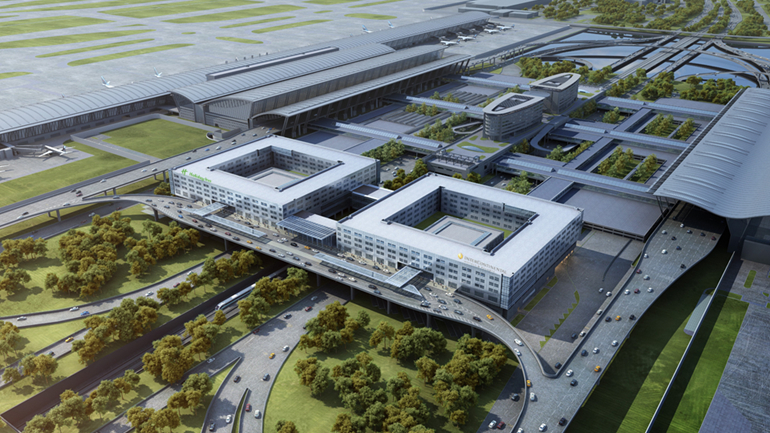 IHG® (InterContinental Hotels Group), one of the world’s leading hotel companies, announced on Monday that it will bring two hotels to Shanghai Pudong International Airport’s latest Terminal Complex. This means one of the world’s busiest airports will expect its first international branded hotels for the first time.

The two hotels – InterContinental Shanghai Pudong Airport and Holiday Inn Shanghai Pudong Airport, both within a few minutes’ walk distance from the arrival hall, are expected to open in 2024. Targeting luxury and mainstream segments respectively, they will be able to offer different options and world-class true hospitality experiences to more travellers from all over the world.

InterContinental Hotels & Resorts is the world’s largest luxury hotel brand with over 200 hotels globally and has been a pioneer in international luxury travel for more than 70 years, providing fascinating experiences for guests. The Holiday Inn brand, also the first IHG brand that entered China in 1984, has helped millions of travellers around the world discover the joy of travel.

Jolyon Bulley, Chief Executive Officer, IHG Greater China, said: “IHG has been committed to the China market for more than 35 years, with our brands widely recognised among Chinese consumers for our global expertise and profound China insights. The Shanghai Pudong International Airport is one of world’s leading international airports, linking the gateway city Shanghai to the world. We are proud to be a part of the complex project, bringing two iconic brands as a flagship combo to a Chinese gateway airport. We believe that under the great collaboration of all parties, the Terminal Complex will become a name card of Shanghai and a model of modern airport complex worldwide.”

Jia Ruijun, Vice President of Shanghai Airport Authority, Chairman of Shanghai International Airport Co., Ltd., said: “Shanghai Pudong International Airport have become made into ‘the Club’ of world’s largest hub airports with more than 74 million throughputs annually, covering an airline network around the world. The airport strives for high-quality development and good business performance while ensuring safety of travellers and providing good services. We are delighted to introduce IHG’s well-known InterContinental and Holiday Inn brands that boast international branded standard to meet the growing demands from more travellers. Seen as the extended VIP lounge of Shanghai Pudong International Airport, the two hotels will also improve our competitive advantage and fuel the delivery of our strategy to build an international hub airport.”

Due to the high convenience, airport hotels have enjoyed a rising demand from travellers who catch an early, late or connecting flight. After the two IHG hotels open, it is expected to see greater synergy generated by all the business sectors within the airport’s complex, meeting needs of accommodation, consumption, MICE and office space. As an increasing number of international and national conventions and exhibitions are expected to be held in Yangtze River Delta including Shanghai, the complex will further facilitate the development of Pudong Aviation Town as well as the demonstration plot of aviation economy.

IHG franchises, leases, manages or owns nearly 5,800 hotels and approximately 865,000 guest rooms in more than 100 countries, with over 1,900 hotels in its development pipeline. IHG also manages IHG® Rewards Club, our global loyalty programme, which has more than 100 million enrolled members.

InterContinental Hotels Group PLC is the Group’s holding company and is incorporated in Great Britain and registered in England and Wales. More than 400,000 people work across IHG's hotels and corporate offices globally.