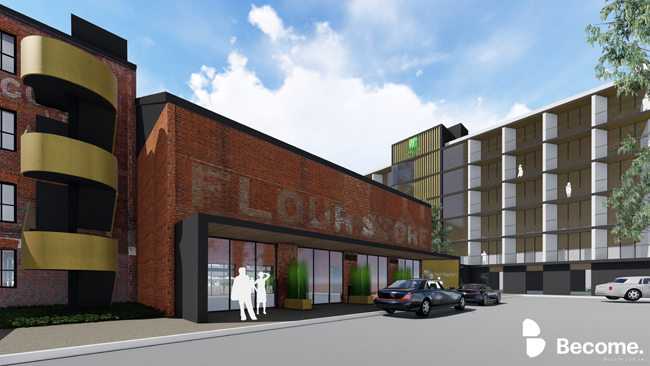 IHG will open a flagship regional Holiday Inn in Wagga Wagga in early 2021, following the signing of a management agreement with Interlink Group (Australia).

With 148 rooms, Holiday Inn & Suites Wagga Wagga will be the largest hotel in the city, as well as a unique iteration of the brand. It will feature a 6-storey building of new hotel rooms that show off the best of Holiday Inn, alongside the adaptive re-use of the heritage-listed Murrumbidgee Flour Mill and Grainstore, one of Wagga’s most iconic locations.

Holiday Inn & Suites Wagga Wagga is destined to become a dining and event destination, with an indoor restaurant and bar, spilling out to a Mediterranean-themed piazza that will allow guests to take in its distinctive surroundings. The hotel will also provide a first-class function and conference centre, capable of hosting private and corporate events of more than 300 guests. Elements of the property’s heritage will be elegantly woven into the interior décor, bringing the history of the site to life for visitors and guests.

This next phase of development for Murrumbidgee Flour Mill and Grainstore represents a $37 million investment in Wagga Wagga and is anticipated to create 120-150 jobs during construction, followed by approximately 60-80 ongoing positions once the hotel opens in 2021.

Abhijay Sandilya, IHG’s Senior Director of Development – Australasia, said: “Holiday Inn & Suites Wagga Wagga is a flagship regional signing for IHG, and is destined to be a bellwether for the city; combining history with a modern and exciting new generation of the Holiday Inn brand. The signing continues the momentum of Holiday Inn in Australia’s regional and satellite hubs such as Sydney St Marys, Geelong, and Melbourne’s Coburg, Ringwood and Werribee.”

Yu Xiao, Owner – The Mill Development, commented: “Wagga is the largest inland city in New South Wales and the hub of the Riverina region, so it’s crying out for a large scale, internationally branded hotel. IHG is a global leader with a fantastic local team, and we can’t think of a better way to bring this iconic location to life than as a Holiday Inn, the world’s largest and most recognised hotel brand family. We are confident that a globally branded hotel of this calibre will help build Wagga’s credentials as a business destination”

Located midway between Sydney and Melbourne, Wagga is an important agricultural, military and transport hub of Australia, and provides education, health and other services to the broader region. The hotel will be in the heart of the CBD at 50 Edward Street, a short walk from the train station and opposite Robertson Oval, which hosts cultural and sporting events such as cricket, rugby league and AFL. Wagga Wagga Airport is just 11km away.

Mayor of the City of Wagga Wagga Councillor Greg Conkey OAM said the hotel development was a good fit with Wagga Wagga’s reputation as a progressive regional capital in New South Wales.

"Our city continues to attract large-scale events which bring 1.3 million visitors to Wagga Wagga each year. A development of this calibre is sure to support the city as a preferred destination for business and leisure events. In recent weeks Wagga Wagga has hosted events such as the NSW Touch Junior State Cup Southern Conference titles which saw accommodation booked out across the city. Wagga Wagga will again host the time-honoured Wagga Gold Cup carnival in May which coincides this year with the NRL match between Canberra Raiders and Penrith Panthers. These blue-ribbon events continue to bring visitors to the city and in the long-term as we grow and host more events of this size, we will need to accommodate the influx of visitors.”

IHG currently has 47 hotels operating under five brands in Australasia, including: InterContinental, Crowne Plaza, voco, Holiday Inn and Holiday Inn Express, with another 27 in the pipeline, including voco, EVEN Hotels and Hotel Indigo.*

IHG franchises, leases, manages or owns more than 5,600 hotels and approximately 837,000 guest rooms in more than 100 countries, with more than 1,900 hotels in its development pipeline. IHG also manages IHG® Rewards Club, our global loyalty programme, which has more than 100 million enrolled members.

InterContinental Hotels Group PLC is the Group's holding company and is incorporated in Great Britain and registered in England and Wales. More than 400,000 people work across IHG's hotels and corporate offices globally.