IHG Intensifies Effort to Fight Human Trafficking in the Americas

Home/IHG Intensifies Effort to Fight Human Trafficking in the Americas

IHG Intensifies Effort to Fight Human Trafficking in the Americas 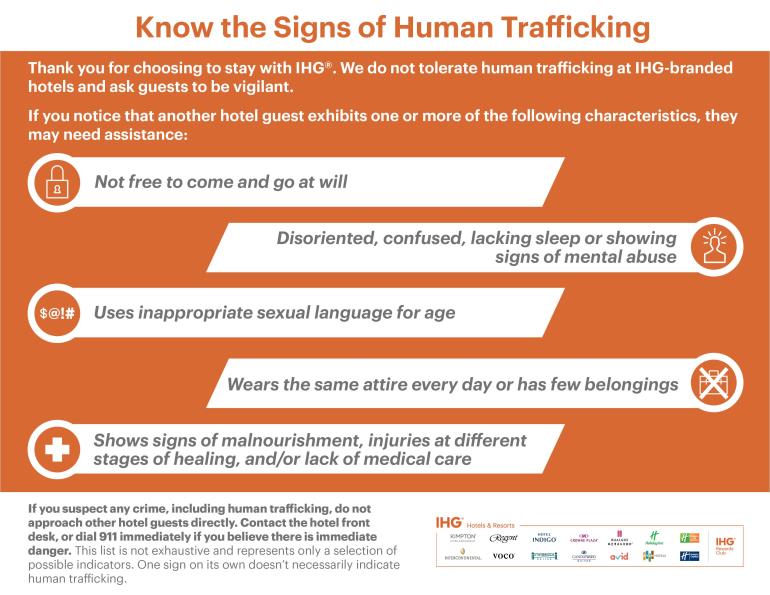 Company focuses on awareness and prevention with mandatory training, tools and resources for hotel colleagues

January is recognized as National Slavery and Human Trafficking Prevention Month in the U.S. and IHG®, one of the world’s leading hotel companies, has intensified its ongoing effort to fight human trafficking. The company has introduced new programs, tools and resources for colleagues to increase awareness and aid prevention of human trafficking, including a free training available to all IHG-branded hotels worldwide, including more than 4,200 properties in the Americas.

Human trafficking, a form of modern slavery, is a $150 billion criminal enterprise that brings suffering and injustice to an estimated 40 million men, women and children across the globe, according to the International Labor Organization. It is a domestic and international issue that is present in communities of all sizes with individuals of all ages and backgrounds trafficked and exploited for purposes including sexual abuse and forced labor.

Elie Maalouf, Chief Executive Officer, Americas, IHG, said: “At IHG, we condemn human trafficking in all forms, and we are taking a strong stance in partnership with our owners, elected officials and others in the industry. We are committed to protecting our guests, communities and owners from the impact of human trafficking as well as maintaining the integrity of IHG’s brands. We will not tolerate it, or those who would enable it, in the IHG system of hotels, and we are empowering all of our colleagues with the tools, resources and support they need to combat this crime on every level.”

Most recently, in December, IHG hosted dozens of colleagues from local Georgia hotels for a group training and discussion at the Crowne Plaza® Atlanta Perimeter at Ravinia, located near the company’s Americas headquarters in Atlanta. During the event, attendees learned about the work to fight human trafficking in Georgia from First Lady Marty Kemp, as well as support and assistance programs available for survivors from Mary Frances Bowley, founder and executive director of non-profit Wellspring Living.

“Our partnership with the hotel and lodging industry is forged by a common goal: ending human trafficking in Georgia,” said First Lady Kemp. “I applaud IHG’s efforts to train employees on identifying the warning signs of trafficking and supporting survivors. Education and awareness are key in this critical fight, and this training equips staff with the potential to save lives.”

Click here to view a highlight video from the December training event, including comments from colleagues in attendance. IHG has also released a new video featuring a one-on-one conversation with First Lady Kemp and Colleen Keating, Chief Operating Officer, Americas, IHG, where the two leaders discuss the importance of public-private partnership in the fight against human trafficking and progress in the state of Georgia.

Since its launch in summer 2019, colleagues in more than 2,300 hotels across the U.S., Canada, Latin America and the Caribbean have completed IHG’s online anti-human trafficking training. The company expects colleagues in all IHG-branded hotels in the region to have completed the training by March 2020.

Additionally, IHG continues to work closely with a variety of organizations such as the American Hotel & Lodging Association (AHLA), Asian American Hotel Owners Association (AAHOA) and Georgia Hotel & Lodging Association (GHLA) to share best practices, coordinate efforts and attack the issue on all levels. The company has also engaged in additional collaborative efforts, such as commitments to ECPAT and the criteria of The Code, as well as the AHLA 5-Star Promise. IHG also actively supports non-profit organizations that provide essential goods and services to support the recovery of human trafficking survivors, and coordinates regular volunteer opportunities for colleagues.

IHG is a global company with a presence in more than 100 countries. The company considers addressing human trafficking a key component of its larger commitment to responsible business and at the core of how it operates. Read more about the company’s position and its consistent standard across every market in its global Human Rights Policy.

IHG franchises, leases, manages or owns nearly 5,800 hotels and approximately 865,000 guest rooms in more than 100 countries, with over 1,900 hotels in its development pipeline. IHG also manages IHG® Rewards Club, our global loyalty programme, which has more than 100 million enrolled members.

InterContinental Hotels Group PLC is the Group’s holding company and is incorporated in Great Britain and registered in England and Wales. More than 400,000 people work across IHG's hotels and corporate offices globally.