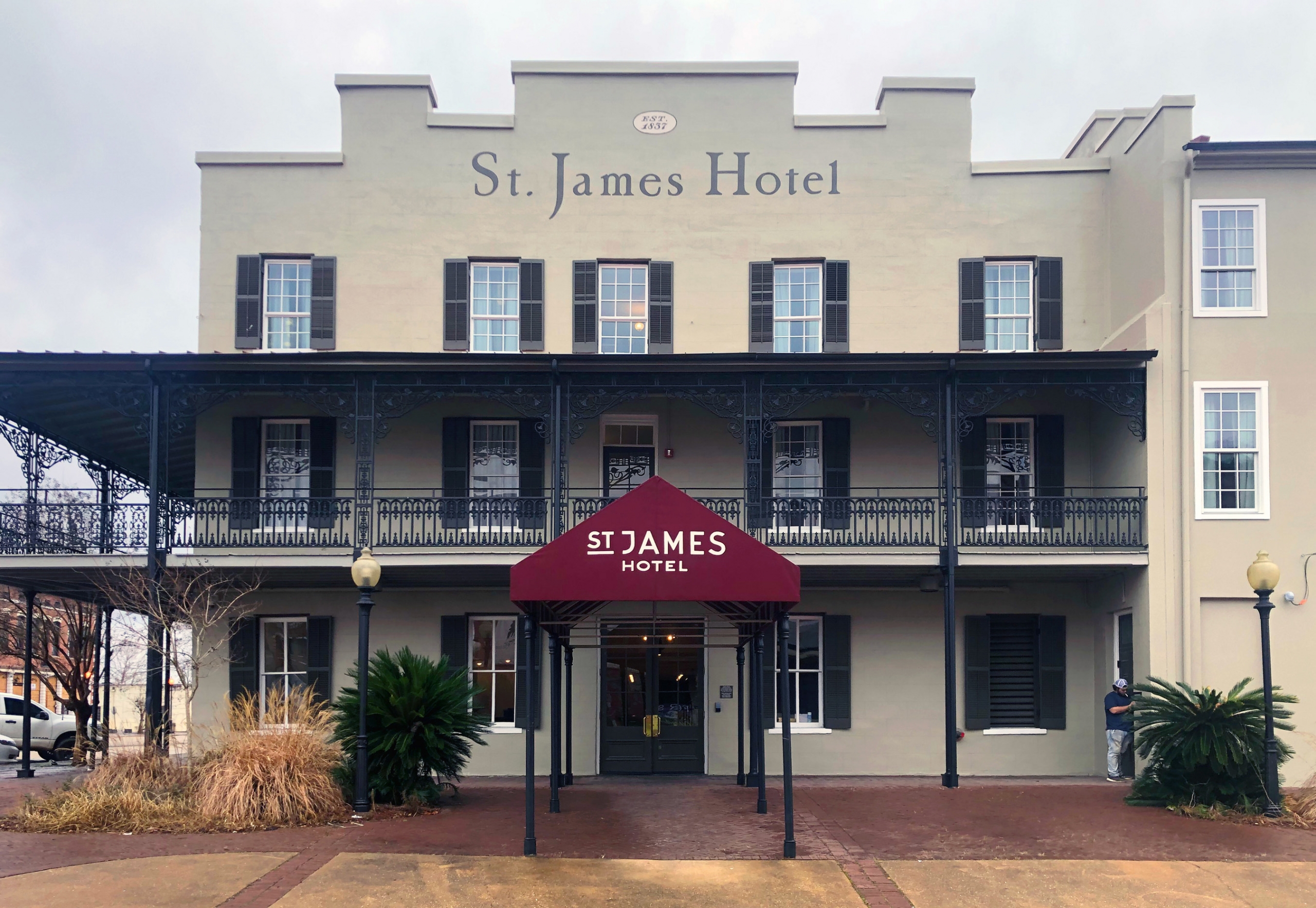 THE WOODLANDS, Texas, Jan. 26, 2021 — The Woodforest CEI-Boulos Opportunity Fund, a high-impact commercial real estate Opportunity Zone fund established by Woodforest National Bank® and CEI-Boulos Capital Management, announced its $2 million equity investment in the redevelopment of the historic, long-shuttered St. James Hotel in Selma, Alabama. The St. James Hotel, the only hotel in downtown Selma, will support the city’s growing civil rights tourism industry and help revitalize the local economy, creating 45 permanent jobs with training, health insurance and other benefits (42 of these jobs will be accessible to people with low incomes). The Woodforest CEI-Boulos Opportunity Fund is the only outside investor in the redevelopment project, spearheaded by Birmingham-based Rhaglan Hospitality, which renovated and expanded the iconic St. James Hotel into a boutique 55-key, Hilton™ Tapestry, full-service hotel.

“There is nothing more important to me than increasing investment and opportunity across Alabama’s 7th District,” said Rep. Terri Sewell. “That is why I have worked so hard in tandem with Alabama leaders to maximize the benefits of the Opportunity Zone program throughout Alabama’s 7th District, from Birmingham to the Black Belt. I am especially grateful to Woodforest National Bank and CEI-Boulos Capital Management, LLC for their partnership in restoring the St. James Hotel in my hometown of Selma. This critically important investment will not only revitalize a historic asset of downtown Selma, but also support the city’s growing civil rights tourism industry.”

The hotel is a block from the Edmund Pettus Bridge, a National Historic Landmark that attracts tourists from around the world as the scene of “Bloody Sunday” when, in 1965, civil rights activists were attacked by law enforcement at the start of a planned march from Selma to Montgomery, an effort that ultimately led to passage of the Voting Rights Act.

“CEI-Boulos Capital Management is committed to harnessing the Opportunity Zone incentive to serve its intended purpose – to truly benefit and revitalize underinvested communities like Selma,” said Sam Spencer, CEO and Managing Director, CEI-Boulos Capital Management. “Despite its world-wide fame, Selma is representative of thousands of other similar small rural communities that are struggling – and which the Opportunity Zone incentive was meant to benefit. The investment in the St. James Hotel will help revitalize Selma’s downtown and attract people from around the world to learn about an important part of our nation’s history. This investment is an example of the fund’s efforts to leverage private capital to help address the nation’s renewed focus on racial and economic equity.”

“Woodforest is proud to see our fund invest in high impact and meaningful projects like the St. James Hotel,” said Doug Schaeffer, Executive Vice President, CRA Executive Director, Woodforest National Bank. “Investments like this may not be possible but-for banks leveraging the combination of the OZ incentive and the Community Reinvestment Act. We hope to see other banks use this powerful investment tool to invest in underutilized assets in ways that allow communities to realize their full potential.”

Built in 1837, the St. James Hotel is the last pre-Civil War riverfront hotel in the Southeast and is central to this rural community’s rich history. Following the Civil War, the hotel was operated by Benjamin Sterling Turner who became the first African American elected to U.S. Congress in 1870. After closing as a hotel in the 1890s, the building was used for commercial and industrial purposes for over 100 years. It reopened as a hotel in 1997, and after years of management challenges, was closed in 2017.

“The redevelopment of the St. James Hotel is the beginning of a new chapter for Selma,” said Joanne Bland, lifelong Selma resident and civil rights activist, owner of Journeys for the Soul (a civil rights touring agency), and co-founder and former director of the National Voting Rights Museum in Selma. “Like many other rural towns, the population is getting smaller and the kids don’t come back home. People come to Selma, take pictures of the bridge, and move on to Montgomery. The hotel will make a big difference for our community.”

Rhaglan Hospitality, which specializes in the restoration and adaptive re-use of historic assets, will manage the hotel. The project is well-aligned with the City of Selma’s 25-year comprehensive plan to rejuvenate the historic downtown and nearby Riverfront Park.

Jim Lewis, CEO of Rhaglan Hospitality, stated, “The re-opening of the St. James Hotel culminates a five-year journey for Rhaglan Hospitality, made possible by the equity investment by the Woodforest CEI-Boulos Opportunity Fund and a redevelopment loan provided by American South Real Estate Fund. Without their assistance, we would not be re-opening as a 55-room hotel. The job creation and economic stimulus for an economy like Selma’s cannot be underestimated. Our team is honored to have the opportunity to continue the vibrant history of the St. James Hotel and become an active part of the critically important city of Selma.”

The St. James Hotel is one of nine investments made so far by the Woodforest CEI-Boulos Opportunity Fund. The fund recently also closed on an investment in the redevelopment of the American Red Cross Building in Birmingham.

“We are thrilled to play a role in this transformational project,” said Morris Fisher, President of Boulos Asset Management and Managing Director of CEI-Boulos Capital Management. “Our fund searched for opportunities around the country. The St. James Hotel is a prime example of how Opportunity Zones can build economic opportunity in underinvested communities.”

“Of the $150 million in deals we have helped to facilitate, bringing the St. James back to life ranks among the best – but it wouldn’t be possible without partners. We have encountered few other funds that are as dedicated to authentic community engagement, in particular, with rural populations. We are proud to have made the connections between Rhaglan and the fund’s management team,” said Alex Flachsbart, founder, and CEO of Opportunity Alabama, a statewide 501(c)(3) organization dedicated to equitable economic development in Alabama’s Opportunity Zones.

The Opportunity Zones program is a community investment tool established by Congress in the Tax Cuts and Jobs Act of 2017 to encourage long-term investments in low-income urban and rural communities nationwide. Opportunity Zones are low-income census tracts nominated by governors and certified by the U.S. Department of the Treasury. There are over 8,700 certified Qualified Opportunity Zones across the 50 states and five U.S. territories. Investors in commercial real estate and operating businesses located in Opportunity Zones can receive certain federal capital gains tax advantages.

The Woodforest CEI-Boulos Opportunity Fund invests in high-impact commercial real estate projects in federally designated Opportunity Zones with the goal of ensuring that its investments benefit economically distressed communities in which the projects are located. The fund is an innovative collaboration between Woodforest National Bank, the fund's investor, a privately held, employee-owned bank with over 750 branches, and CEI-Boulos Capital Management, LLC, the fund's manager, a joint-venture of Coastal Enterprises, Inc. (CEI), one of the nation's most successful Community Development Financial Institutions (CDFIs), with over 40 years of experience investing in communities with low-incomes, and The Boulos Company, an integrated commercial real estate firm with broad experience in capital markets and real estate development. The fund's Social Impact Advisory Board provides input related to the social and environmental impacts of proposed investments by using metrics that align with goals of both CRA and the "Opportunity Zones Reporting Framework" developed by a partnership of the U.S. Impact Investing Alliance, the Beeck Center on Social Impact and Innovation at Georgetown University, and the Federal Reserve Bank of New York. The fund is intentional in ensuring that all investments foster community engagement and promote social equity. The fund was recognized by Forbes and the Sorenson Impact Center as one of "The Forbes OZ 20: Top Opportunity Zone Catalysts" and one of the ten most innovative and impact focused Opportunity Zone funds in the country.