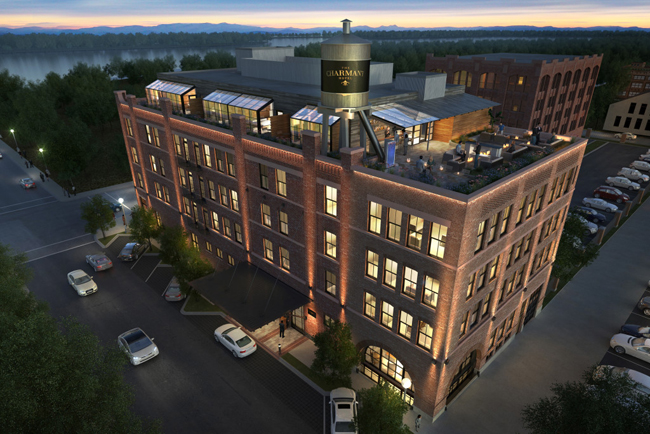 where a local’s destination becomes a traveler’s dream

(CHICAGO; August 26, 2015)– Chicago-based Aparium Hotel Group and owner Weber Holdings proudly announce the opening of The Charmant Hotel (101 State Street, La Crosse, WI), a 67-room upscale independent property, where guests will be welcomed beginning on Tuesday, September 15, 2015. The groundbreaking restoration of the iconic 1898 Joseph B. Funke Candy Company, led by Simeone Deary Design Group and The Kubala Washatko Architects, Inc., began in October 2014 with the goal of refurbishing and resurrecting one of the most prominent and historically significant landmarks in the heart of downtown La Crosse.

“This was an opportunity for us to create a natural extension of our community and commemorate the city of La Crosse for all it has provided our locals,” The Charmant Hotel Owner Don Weber says. “Our goal was to bring life back to this historical building, which we hope will create community growth with upscale dining options and hospitality careers.”

“We are proud to work alongside such passionate owners as well as a talented team that has restored this historical asset in La Crosse,” Aparium Hotel Group COO Kevin Robinson says. “After visiting the town over the past three years, we are confident that our ‘Trans-local’ approach, where great hotels are a destination sought out by travelers and a favorite place for locals, will create an exciting place for the local market to enjoy for generations.”

As part of the opening celebration, and in commemoration of its candy company history, the hotel will give away five “Golden Tickets” for visitors to receive a complimentary stay. Throughout the first week of business, five guests dining at the restaurant, can unroll their silverware and be surprised with a golden ticket redeemable for a one-of-a-kind Charmant Hotel experience.

Located alongside the Mississippi River in La Crosse, Wisconsin, the hotel boasts five stories comprised of 67 chic guestrooms, including four top-floor suites that provide guests with a wrap-around outdoor balcony featuring views of the Mississippi river and downtown La Crosse. In collaboration with owner Weber Holdings, Aparium Hotel Group is leading the programming, positioning, and ongoing management of the new hotel project. The joint venture led the $30 million dollar renovation and restoration and enlisted The Kubala Washatko Architects, Inc. and Simeone Deary Design Group to transform the historic 19th century building into a locally-curated destination for visitors and locals alike, while paying a nod to its original “golden era” charm through deliberate design, food and beverage offerings, and in-room amenities.

The ground floor invites hotel visitors and locals to enjoy multiple food and beverage offerings including: a market-driven restaurant with rustic French influence; cocktail bar and lounge; and coffee and dessert parlour featuring a wood burning fire place. Most notably, the hotel boasts a rooftop terrace serving up pizzas from a wood burning oven and a selection of regional craft brews.

The Golden Ticket prizes are offered from Tuesday, September 15 through Monday, September 21, 2015. To make a room reservation, please visit www.thecharmanthotel.com.

About The Charmant Hotel

Weber Holdings (102 Jay St., Suite 400, La Crosse, WI) is a leading real estate development company in Western Wisconsin. The company is responsible for many of La Crosse County's major development and redevelopment projects and have forever changed the downtown La Crosse skyline.  Weber Holdings is led by President Don Weber and Vice President Nick Weber. In addition to the firm's industry changing projects, Weber Holdings has a long-standing commitment to economic development, job creation, and a proven track record of forging lasting public and private partnerships.  The company is deliberate in its approach and reliable in its commitments.  For more information about Weber Holdings, inquiries can be directed to [email protected].

Aparium Hotel Group is a company founded and controlled by experienced professionals in hotel development, management, and marketing who hold the belief that great hotels are a destination sought out by travelers and a favorite place for locals  a philosophy Aparium calls Translocal Hospitality. Apariums passion and expertise centers on independent hotels and resorts in distinct cities and unexpected resort destinations. Each locale is built on the belief that it should be a brand in and of itself  a true celebration of independent identity and a product of its setting. The company is committed to and engaged in a visionary partnership with independent hotel owners who are intimately knowledgeable of their communities and, as such, view their properties as a source of pride. By fostering collaboration, Aparium delivers measurable and sustainable return on investment with transparency and accountability at all stages of operation. Aparium Hotel Group properties include: The Iron Horse Hotel in Milwaukee, WI; The Charmant Hotel in La Crosse, WI; Hotel Covington in Covington, KY; and The Foundation Hotel in Detroit, MI. The group currently has several additional projects underway to be announced in the coming year. For more information about Aparium Hotel Group visit, www.aparium.com.