How to Say Yes – Every Time

Home/How to Say Yes – Every Time

How to Say Yes – Every Time 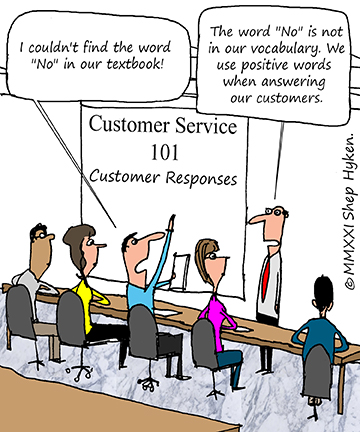 How do you say Yes to every customer request? Is it possible? Is this customer service utopia? My friend Christine Trippi wrote a book titled Yes Is the Answer. And Cameron Mitchell, about whom I’ve written before, wrote a book with a similar title, Yes is the Answer. What is the Question?

Both of these authors have a hospitality background. Trippi is a world-class, award-winning hotel manager and Mitchell is a super-successful restauranteur. Both know the value of their customers hearing yes for an answer.

If you dig a little deeper into the concept, it’s not so much about saying, “Yes” to every customer. It’s about not saying, “No.” And, that’s a pretty big difference, but not to the customer. So, let’s flip this around. Rather than always saying, “Yes,” the strategy can give you just as much impact if you never say “No.”

The key is in how you train people to not say, “No.” Unless the customer’s request is immoral, illegal, could cause the company to lose money (although sometimes that’s okay in the right situation), or something that is so far away from what the company does or sells, not saying, “No,” is not all that difficult. It’s about alternatives and options.

I asked Christine to tell me how she would deal with this scenario. The hotel she works at has no airport shuttle, but a guest who just landed at the airport calls and asks, “Do you have a shuttle to get me from the airport to the hotel?”

The simple answer is, “No.” The better answer is to say, “There are three options to get you to the hotel. You can take a cab, take an Uber or lift, or we’re happy to call a private service and arrange for your transportation.”

I once bought a pair of workout shoes from a shoe store. I loved these shoes so much I wanted to buy another pair. I went back to the same store, only to be disappointed that the brand discontinued that model. Without hesitation, the salesperson had an alternative that he said I would enjoy even more. I tried them on, they fit, and he was right.

In my book, Amaze Every Customer Every Time, I write about the concept, “One to say YES and two to say NO.” (I’ve written about this in past Shepard Letters, too.) Once you have the idea that you don’t want to say, “No” to a customer, you must empower your people to be able to do so. You teach them what they can say, “Yes” to, what they can’t do for the reasons previously mentioned, and how to think in terms of options and alternatives. The idea is that they come up with ways to take care of a customer, but if they feel they are forced to use, “No” for an answer, they go to their manager or supervisor for support. Hence, “One to say YES and two to say NO.”

A Small but Powerful Surprise
Shiji Insights – Recap: The Real Economics of Hotel Guest Engagement Roundtable
The Omnichannel Experience – What the Heck Does That Mean?
Five Lessons on How to Personalize the Customer Experience
How Much Do You Trust Your Customers?
One Simple Idea That Can Help You Retain Your Best Employees
Don’t Cut What Is Obvious to the Customer
Customer Experience Transformation: How to Get the Essentials Right First
Here’s a New Word: Skimpflation
The Three N’s of Employee Fulfillment
Feedback Bribery
“New-Style” Digital Versus “Old-Fashioned” Human Interactions
A Fast Answer or the Right Answer
When Your Customer Experience Hits a “Bump in the Road”
Dealing With Angry Customers: Be Sincere When You Apologize
Old School Ideas Can Have Big Impact
How Digital Transformation Is Facilitating Servitization in the Hospitality Industry
The Secret To Customer Loyalty
The Five Best Things to Say to an Angry or Upset Customer
Best in Class Versus Best in Industry