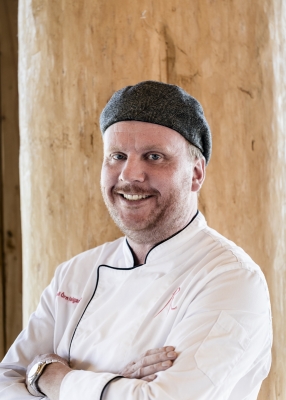 Hotel Ranga, an iconic destination in Iceland for seeing the Northern Lights, welcomes Emil Örn Valgarðsson as Head Chef of the property’s acclaimed Rangá Restaurant. Overlooking one of Iceland’s finest salmon rivers, the restaurant is known for featuring fresh, local, and seasonal ingredients and a menu showcasing the country’s most notable Nordic delicacies with a modern twist.

“Our aim is to provide our guests with the best service possible and we feel that one of the highlights of their stay at Hotel Ranga should be their dining experience,” said Friðrik Pálsson, Hotelier. “With that in mind, we are proud to introduce our new head chef, Emil Örn Valgarðsson. He has over twenty years experience working in kitchens around the world and we’re thrilled to bring this top talent to Restaurant Ranga.”

Hailing from the town of Hveragerði, Iceland, Emil started cooking at the age of 14 and completed his chef training at Lækjarbrekka, a historic Icelandic restaurant in Reykjavík. He also gained valuable experience abroad, cooking in Michelin-starred restaurants in both France and Norway. By the age of 22, Emil opened his first restaurant, and later served as a private chef for the Finnish, French and Norwegian embassies in Reykjavík. His work as a private chef allowed him the opportunity to cook for many presidents and visiting dignitaries and he now applies that same level of distinguished service at Rangá Restaurant.

“My cuisine is best described as modern Nordic and French with a close connection to the nature around us, as I enjoy working with local and seasonal produce and try to source fresh ingredients from nearby suppliers and farmers.” – Emil Örn Valgarðsson, Head Chef

Hotel Ranga, southern Iceland's idyllic countryside retreat, is the ideal location for adventuring through a myriad of natural wonders - from its geysers and black sand beaches to its glaciers and volcanoes. In addition to easy access to everything Iceland has to offer, including ice caves, hot springs and Icelandic horses, the hotel also features an advanced, on-site observatory equipped with high tech telescopes and a local astronomer to guide guests through an unobstructed night sky. That same sky easily makes Hotel Rangá one of the best places on the island to see the Northern Lights. The hotel offers 52 cozy rooms, including continent-themed suites featuring decor from Africa to Antarctica, as well as the acclaimed Rangá Restaurant serving up gourmet fare and river views, a game room and outdoor geothermally-heated hot tubs perfect for relaxing in after a long day of exploring the vast land of fire and ice. Hotel Ranga is as one of a kind as Iceland itself. For more information, visit www.hotelranga.is.