Hotel Price Index From Hotels.com Finds Passion for Travel Is Still on the Rise

Home/Hotel Price Index From Hotels.com Finds Passion for Travel Is Still on the Rise

Hotel Price Index From Hotels.com Finds Passion for Travel Is Still on the Rise 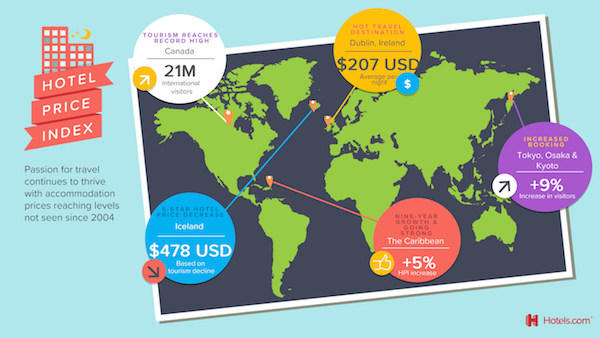 DALLAS, April 2, 2019 — There's no sign of a slowdown for the global travel industry, according to the latest Hotel Price Index™ (HPI™) from Hotels.com™. The prices travelers paid for overnight accommodation rose 3 percent globally in 2018, with every regional index, except the Pacific, receiving a boost.

The growth in travel comes despite uncertainty such as Brexit, the wildfires in California, drought in South Africa and earthquakes in Japan. Travelers also showed resilience and renewed confidence in destinations touched by unrest like Paris, Egypt and Turkey, as well as regions experiencing currency fluctuations like South America, and areas in North America affected by natural disaster.

A few of the study's key findings:

Destinations on the Rise Among the destinations that rose to the top for American and Canadian travelers in 2018 were Ireland, Japan and Turkey.

Flexible visa requirements in some markets and a visit from Pope Francis in August helped Ireland bring in more than 10 million travelers in 2018, a record high. American travelers paid 10 percent more for accommodations in Dublin, an average of $207 per night.

In Japan, Tokyo, Osaka and Kyoto, visitor numbers grew by almost 9 percent for a record high of almost 32 million. Osaka and Kyoto both rose more than 10 spots on the list of the U.S. and Canada's most popular international destinations.

Turkey's tourism is booming despite a financially difficult year in 2018, with Istanbul jumping more than 10 spots in the top 50 most popular destinations for both the U.S. and Canada. International visitors went up by 22 percent in Turkey and Istanbul recorded the highest rise in price paid by American travelers in 2018.

Luxury for Less Both American and Canadian travelers paid quite a bit less to enjoy four-star and five-star accommodations in 2018, at home and internationally.

For American travelers, three destinations saw their five-star rates drop by 13 percent: Charlotte ($282 per night) and Louisville ($226 per night) in the U.S., and Reykjavik. In Iceland, the tourism boom of the past few years has continued to slow down, which brought down the average price paid per night to $478.

Katie Junod, general manager of the Hotels.com brand in North America, said, "HPI has always given us a good barometer on the industry and helps give us an insight into global travel trends. This year we have seen growth despite a lot of political challenges and natural disasters, which indicates that the industry shows no signs of slowing down."

The HPI was set at 100 in its inaugural year, 2004. The index format allows Hotels.com to highlight year-over-year variations in actual prices paid* per night by travelers without foreign exchange fluctuations distorting the picture.

In addition to the great value destinations and hidden gems found in the HPI, travelers who haven't padded their wallets with cryptocurrency yet can take advantage of programs like Hotels.com™ Rewards, which lets them earn free* nights while they sleep.

Hotels.com is the most rewarding way to book a place to stay. We really love travel and we know you do too. That's why we make it really easy to book with us. With hundreds of thousands of places to stay around the world and 90 local websites in 41 languages, Hotels.com has it all. So, whether you're looking for value in Vegas, treehouses in Thailand or villas with views, it's all just a click away. And with our "Reward-winning" loyalty program you earn free* nights while you sleep … what could be better? Booking just got smarter too. With over 25 million real guest reviews and an app so easy to use that it's been downloaded 70 million times, you can be sure to find the perfect place for you.

Pop-Up Hotels, Autonomous Vehicle Sightseeing and Other Trends to Watch in 2020 and Beyond
Politics to Steer Hospitality Landscape in 2020
Redefining Luxury and Culture in Hospitality
Why Select Service Hotels Are Coming to the City Center
Driftwood Hospitality Management Shares New Insights Into Industry Trends From Property Manager Poll
Mixed Travel Signals Ahead for Summer,& But Hotel Revenue Is There if You Want It
New Research Study Explores Trends to Meet Consumer of the Future Needs
U.S. Citizen International Outbound Travel Up Six Percent in 2018
Why Coworking Is Coming to Hotels
2019 Travel and Hospitality Industry Outlook
The Top 7 Hospitality Trends Every Hotelier Should Watch in 2019
2019 Top 10 Hospitality Trends
Avison Young Hospitality Group Releases Timely Video Discussing Q2 Hospitality Trends
Driftwood Hospitality Management Shares Insight Into Hotel, Resort Trends After Polling Property Managers
The Psychology Behind Hospitality: How to Make Your Accommodation Universally Appealing
Hotel Price Index From Hotels.com Reveals U.S. Travelers Spent Their Money on Experiences Abroad
The Transformation of the Hotel Industry in the 2010s
How Artificial Intelligence Is Changing the Game for the Hotel Industry
Unlearning to Learn Also Means Inventing
5 Hospitality Trends to Keep an Eye on in 2018