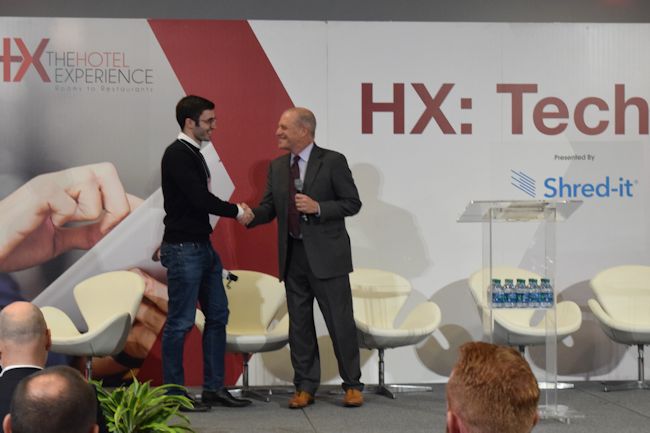 ALICE faced some hot competition for the award. Finalists included Maidbot, makers of a housekeeping robot, Openkey, providers of mobile keyless hotel access, Remi, a smart mirror from Mirror Image and KEYPR, VDroom, a direct marketing platform that enables the creation of virtual reality websites for hotels, and Verdant, an energy management system.

In his pitch for ALICE’s ability to help staff forge meaningful relationships with guests, company Co-Founder and President Alex Shashou set the stage by pointing out that, despite our best attempts, we’re failing as an industry when it comes to delivering hospitality in today’s digital age. He showed the audience a recent overview of customer satisfaction benchmarks by industry, which revealed that the hotel industry ranks behind banks, behind supermarkets, and even behind phone companies, when it comes to customer satisfaction! “By knowing your name, an Uber driver knows more about you than most hotel staff. Domino’s delivers pizza with more transparency than room service. Siri fulfills more of your local queries than your concierge.” The list goes on, Alex explained.

We should all take inspiration, he said, from one hotel group that was willing to take a risk to improve guest engagement. “They played to win, instead of playing not to lose,” he said, “This group came to us and said, ‘What if we could take our guest app, that doesn’t work as well as we want it to, and connect it to your staff platform?’ We said yes. So, they took our Guest API and our staff platform and had their own developers build our messaging tools and our services into their guest app. They then launched ALICE at their hotels and let their front desk respond in any way they wanted. Of course, we thought this would be risky – no one knew what would happen, but the best thing possible occurred – guests and staff loved it, and started conversing. And true moments of hospitality started to happen.”

Despite the optimistic message, Alex was surprised by the win: “When staff operations technology competes against robots, the robots usually win. This award is an important endorsement from the industry that platform technology that streamlines staff communication and task management is a valuable technology breakthrough that can make a big impact on the guest experience. We thank the judges, and look forward to reconnecting with everyone again at HX 2018.”

ALICE has created the first complete communication, cost savings and revenue generation operations platform for hotels, which enhances the guest experience and connects all points within the hotel to simplify guest service - and make it more cost-effective. Since the company was founded in 2013, ALICE has gained serious traction in the industry working many of the world's leading hotel brands, including Two Roads Hospitality, Dream Hotel Group, Grupo Posadas, SIXTY Hotels, NYLO Hotels, and Leading Hotels of the World. ALICE was founded by Dmitry Koltunov, Justin Effron, and Alex Shashou, and has raised $39M to date. The company acquired concierge technology provider GoConcierge in 2017. For more information, visit https://info.aliceapp.com.