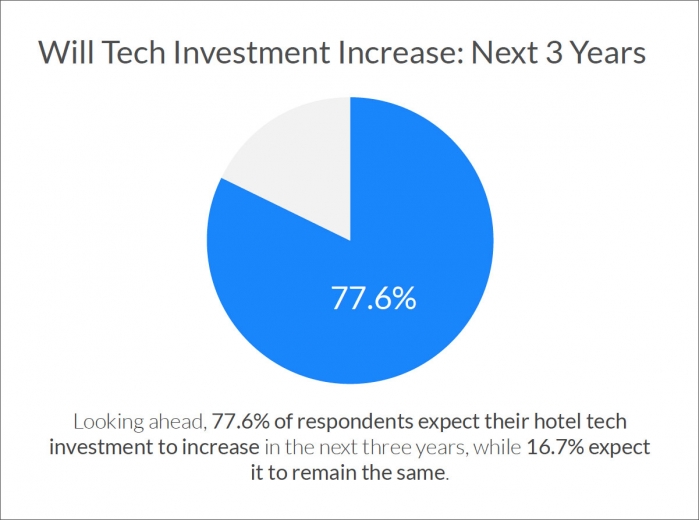 San Francisco, March 8, 2022 – The digitization of the hospitality industry has been underway for decades, but the past two years have accelerated tech adoption in hotels across the globe.

The overwhelming response was that automation and integration are seen as key to future success by the majority of those working in a hotel revenue function. In fact, 77.6% of respondents expect to increase their hotel tech investment in the next three years.

“Tech adoption in hotels has been increasingly accelerating as hotels seek greater efficiencies in both front and back of the house,” said David Woolenberg, CEO, Duetto. “It’s promising to see that more industry leaders are focusing on tech adoption, tech upgrades, and creating an integrated tech stack.”

Most respondents (67.6%) currently use a revenue management system (RMS), such as Duetto. Of the remaining 32.4%, 50% sought to invest in revenue technology in 2022, with a further 23.4% looking to invest in the next two years.

When asked to identify the most important trends in Revenue Management for 2022, technology came out on top, with 58.6% of respondents citing integrated systems as most important, followed by 54.8% naming automation as critical.

55.2% of Revenue Managers surveyed also reported they’ve increased their focus on strategic revenue management as automation has helped reduce manual tasks such as data entry, reporting, and other time-consuming efforts.

Duetto conducted this survey among its software users and other hospitality industry professionals, including revenue consultants and educators, from across the globe from January 14 – February 11, 2022. A total of 210 responses were received.

Duetto delivers a suite of cloud applications to simplify hospitality revenue decisions and allow hoteliers to work smarter, increasing organizational efficiency, revenue, and profitability. The unique combination of hospitality experience and technology leadership drives Duetto to look for innovative solutions to industry challenges. The software as a service platform allows hotels and casino resorts to leverage real-time dynamic data sources and actionable insights into pricing and demand across the enterprise. More than 4,000 hotel and casino resort properties in more than 60 countries have partnered to use Duetto’s applications, which include GameChanger for pricing, ScoreBoard for intelligent reporting, and BlockBuster for contracted-business optimization. Duetto is backed by investors Warburg Pincus, Icon Ventures, Accel Partners, Battery Ventures, and Spectrum 28.

In January 2022, Duetto was voted as the Best Revenue Management System in the HotelTechAwards 2022.