Ohio hotel supply: Benefiting from a strong economy, the United States hotel industry is currently experiencing a boom, which has developers across the country looking for their next opportunity. Many are finding that opportunity in major Ohio markets, as evidenced by significant growth in recent years.

The Cincinnati, Cleveland and Columbus MSAs have each seen at least 15 new hotels open since 2016, with more properties currently under construction or proposed. Dayton trails the other MSAs with only six hotels opened since 2016, but all markets boast strong pipelines heading into the future. With all this new development in the Buckeye State, we have broken down some key metrics to highlight the robust nature of the Ohio hotel industry.

Of the Ohio markets that Hotel & Leisure Advisors aggregates data for, Cincinnati, Cleveland and Columbus demonstrated the most robust growth, while Dayton has lagged behind. While some of this is due to their size, each of Ohio’s three largest cities have traits that contribute to their ability to support hotel growth.

Cincinnati has the largest economy in Ohio, is home to several major colleges and universities, boasts two major national sports teams, is the third largest city in the state, and has an abundance of cultural attractions.

Columbus benefits from being the state capitol, boasts the state’s highest population, is home to one of the largest public universities in the country, and provides a number of cultural and entertainment attractions.

Cleveland benefits from its location on Lake Erie and has the second highest population in Ohio. Cleveland has gained national attention in recent years as the site of the Republican National Convention in 2016 and for its NBA and MLB teams making playoff runs. It has a robust healthcare industry in the Cleveland Clinic and University Hospital health systems and is home to several major public and private universities.

Meanwhile, Dayton, as Ohio’s sixth largest city, benefits from its proximity to the Wright-Patterson Air Force Base and several major colleges and universities, as well its association with aviation and defense. 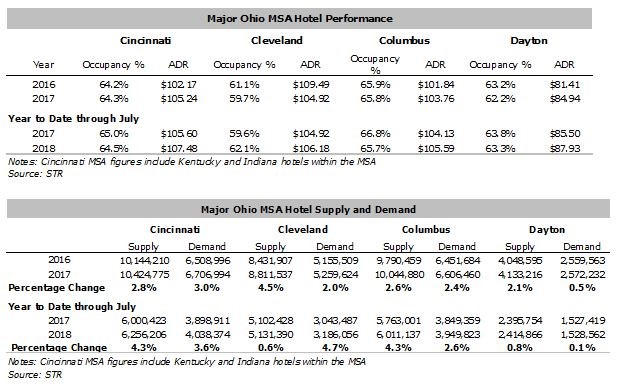 All markets grew in ADR year-over-year except for Cleveland, which experienced a decline following the RNC in 2016. Year-to-date 2018 ADR is up in each market.

Cincinnati was the only market that saw growth in occupancy in 2017; however, it was minimal. Year-to-date 2018, all markets are down so far except for Cleveland. While the downtown hotels in Cleveland are experiencing strong performance levels, the suburban areas are not performing as well.

Demand has increased in each market year-over-year and year-to-date. Due to supply also increasing during this same period, occupancy growth has slowed.

In the following table, we highlight the supply additions that have come to each market since 2016.

The Cleveland and Columbus MSAs have seen the greatest number of new hotels enter the market with 19 each. Cleveland has gained the most total rooms during this time. In 2016 alone, Cleveland saw 12 new hotels open during the year in which they hosted the RNC. The largest of these projects included the 600-room Cleveland Hilton Downtown, the 276-room Holiday Inn Cleveland Clinic and the 180-room Drury Plaza Downtown.

Some of the larger hotels that have opened in Columbus include the 240-room Marriott near The Ohio State University and the 214-room Renaissance Hotel in Polaris, which opened in 2018.

In April 2018, the 239-room Summit Hotel opened in Madisonville, which is the largest addition to come to the Cincinnati area since 2016.

During this period, Dayton has not seen any major hotel additions, with most new supply being limited-service hotels between 90 and 120 rooms. In late 2016, the Dayton market lost a major hotel when the 184-room Dayton Grand Hotel closed.

Growth has been significant in each of these markets and new proposals are still rolling in. Below we have highlighted the number of hotels that are currently proposed or under construction in each market.

The Columbus market is currently the hottest spot for developers in the state. Planet Oasis, a $2 billion proposed development in Delaware County, is a highlight of the proposed developments in Columbus. This project alone calls for development of up to 20 new hotels. In early 2018, it was announced that the Hilton Columbus Downtown would add a 470-room expansion to bring its room count to 1,002 rooms.

Cincinnati is not far behind Columbus in terms of proposed and under-construction hotels. The 106-room Lytle Park Hotel, which will be part of Marriott’s Autograph Collection, is currently under construction. It was recently announced that the historic Ingalls Building in downtown Cincinnati would be converted into a 140-room hotel, with the renovation expected to cost approximately $12 million.

Construction has slowed a bit in Cleveland since the market saw an influx of new hotels in 2016. Still, developers see potential in parts of the market outside of downtown. This is true for the former Spitzer Hotel in Lorain, which closed in 2005 and has sat vacant since. The hotel is being rebranded as a Cobblestone and will also feature event space.

Dayton is projected to see sizeable growth as well. Early in 2018, the Dayton International Airport announced it was searching for a developer for a new hotel to be built on-site. Dayton could also see its first dual-brand hotel with the proposed Home2 Suites and Hampton Inn & Suites.

Area employment affects hotels in several ways, the most important being as a demand generator for local hotel supply. These employment numbers provide a snapshot of the health of hotel economy. The tables below represent unemployment and employment rates for each Ohio market. 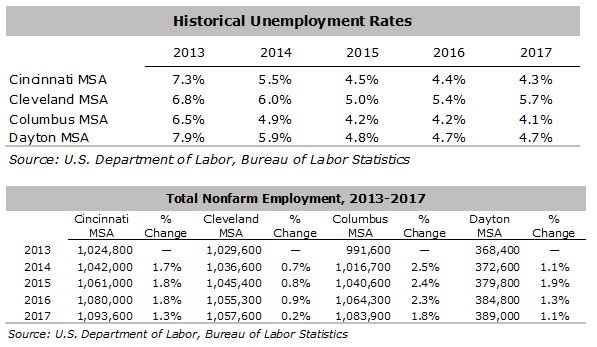 Since 2013, unemployment rates have declined steadily in all markets as the economy continues to hum along. The one exception is the slight uptick in Cleveland’s unemployment in 2017. However, preliminary statistics as of August 2018 show the Cleveland unemployment rate at 5.2%

Total employment has increased across all Ohio markets, with some growing faster than others. Columbus is experiencing the most growth while Cleveland ranks lowest among major cities.

Much like the national market, Ohio has proven to be a vigorous and resilient market for hotel development. While certain performance metrics may be down slightly from 2016 to 2017, the continued growth in employment and decline in unemployment, along with a continued strong national hotel market, should see all major Ohio markets continue their growth cycles.

This article represents an interpretation of data collected by STR, parent company of HNN. Please feel free to comment or contact an editor with any questions or concerns.

This article was originally published by Hotel News Now.

Adam Zarczynski is an Associate at Hotel & Leisure Advisors (H&LA), a national hospitality consulting firm. H&LA produces reports that assist clients in the hospitality real estate industry. H&LA specializes in appraisals, feasibility studies, impact analyses, economic impact studies and litigation support for hotels, resorts, waterparks, casinos, conference and convention centers, golf courses, ski resorts and other leisure real estate. Our experienced consultants travel nationwide analyzing hospitality trends, studying leisure industries, and understanding local communities. We focus on our clients’ competitive markets and provide thorough and thoughtful analysis of hospitality properties. Our consultants have analyzed and prepared studies on more than 2,000 properties in more than 45 states, Canada, and the Caribbean. You can reach Adam in our Cleveland office via email at [email protected] or by phone at 210-319-5440.

Request for Proposals to Be a Management Company for Under-Construction High-End Boutique Hotel and Private Golf Club in Southwestern Virginia
Hotel Market in Grand Rapids Continues to Boom
Waterparks: Growth Trends in 2019
2018 Waterpark Forecast: Expansion
Data Reveals Risks, Prospects Facing US Hotels in 2018
Hoteliers Take Note as Social Entertainment Venues Innovate
Convention Center Hotels Boost Both Supply, Demand
Highlights from the National Association of Sports Commissions Symposium
Houston Hotel Market: Will 2017 be Up or Down?
The Financial Impact of Hotel Renovations
Request for Proposals to Develop a Proposed Hotel in Union Township, Ohio
Gaming a Winning Bet in Ohio
Measuring the Economic Benefits of Tourism
Golf Entertainment Complexes Offer a New Spin on an Old Game
Request for Proposals to Develop a Proposed Hotel in Fox Lake, Illinois
How Hoteliers Can Handle a Minimum Wage Jump
One Drop at a Time (Part Two)
One Drop at a Time
Indoor and Outdoor Waterpark Supply Continues Growth as Surf Simulators Take Center Wave
Winning the Stay to Play Game