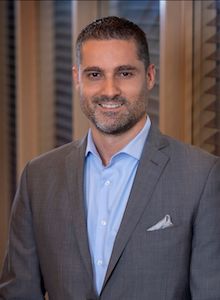 “Expanding our executive leadership team is mission critical as we continue to grow the company through performance,” said Brad Rahinsky, president and CEO of HE. “Drew’s diverse background is a differentiator that gives him a unique skillset and perspective in his new role. Starting his career on the operation’s side and culminating as a GM of the Year for Marriott, followed by many years in senior leadership on the sales and revenue generation side, Drew is uniquely qualified to lead the operational engine for our organization. Cesar’s impact overseeing sales and marketing for HE has been immediate and significant. Together, their combined efforts will drive top-line growth and maximize our operational efficiencies, allowing us to provide the highest returns for our stakeholders.”

Drew most recently served as senior vice president of revenue generation for HE. He joined HE in 1999 as a summer intern and earned the position of bench manager, covering various operational positions at several of the company’s hotels. While serving as general manager for the TownePlace Suites Kennesaw, Marriott International recognized him as General Manager of the Year for the brand. In 2006, Drew was appointed as the firm’s first revenue manager and, in 2008, the company promoted him to full-time director of revenue generation.

Cesar joined HE in 2018 as VP of sales and marketing for HE. Prior to joining HE, he was director of new hotel openings for InterContinental Hotels Group and spent his early years as a multi-unit sales leader with Trust Hospitality and Starwood Hotels & Resorts.

“Drew and Cesar exemplify the HE culture and how effective leaders drive results. Both have developed strong teams that continue to drive results,” said Bryan DeCort, EVP. “Drew is a great example of our company’s commitment to internally developing talent. Internal advancement has always been a keystone of Fred Cerrone, founder and chairman of Hotel Equities.” DeCort continues, “Promoting from within is a big part of our culture and acknowledges the hard work and results-driven performance of our leaders. Drew and Cesar demonstrate diverse leadership skills that give us a competitive advantage as we continue to experience record growth in our portfolio.”

Drew is a graduate of Clemson University with a B.B.A. in Business Management. Cesar graduated from Washington State University and Cesar Ritz College in Brig, Switzerland (B.A. and a Swiss Higher Diploma under an accelerated program).