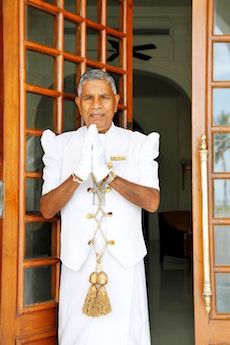 COLOMBO, Sri Lanka (June 16, 2016) – It has been 50 years since Mr. Banda lugged his first barrel of beer into the tap room at the Galle Face Hotel. Now – at 71 years old – the loyal employee is still earning his keep at Sri Lanka’s oldest and most fabled property.

Rathnayaka Mudiyanselage Punchi Banda was barely out of his teens when he began work at the property on July 17, 1966. By then the hotel, which opened in 1864, was already more than 100 years old. In his first ten years, he worked his way from bar laborer to security guard. Forty years ago, he began greeting guests as a doorman, and he’s still at it today.

“Mr. Banda is more than just a doorman. He is the face of the property,” said Sanjeev Gardiner, chairman of the Galle Face Hotel. “He’s the first person guests see when they arrive and often the last person from the hotel they see as they depart. In his role he embodies the hotel’s grace and charm.”

Over the years he has welcomed many famous guests including Indira Gandhi, Marshal Tito, Fidel Castro, and Yuri Gagarin. He’s greeted many former Sri Lankan presidents and prime ministers. And once, he held an umbrella for one Arthur C. Clarke, author of 3001: The Final Odyssey (which was penned at the hotel).

Mr. Banda trained under the watchful eye of Kottarappu Chattu Kuttan, Sri Lanka’s most famous doorman who worked at the hotel until his passing in 2014. At the time of his death Mr. Kuttan had served at the hotel for 72 years and was one of the oldest hotel employees in the world – at 94 years of age. Mr. Banda plans to follow in his mentor’s footsteps by continuing to work at the hotel for many years to come.