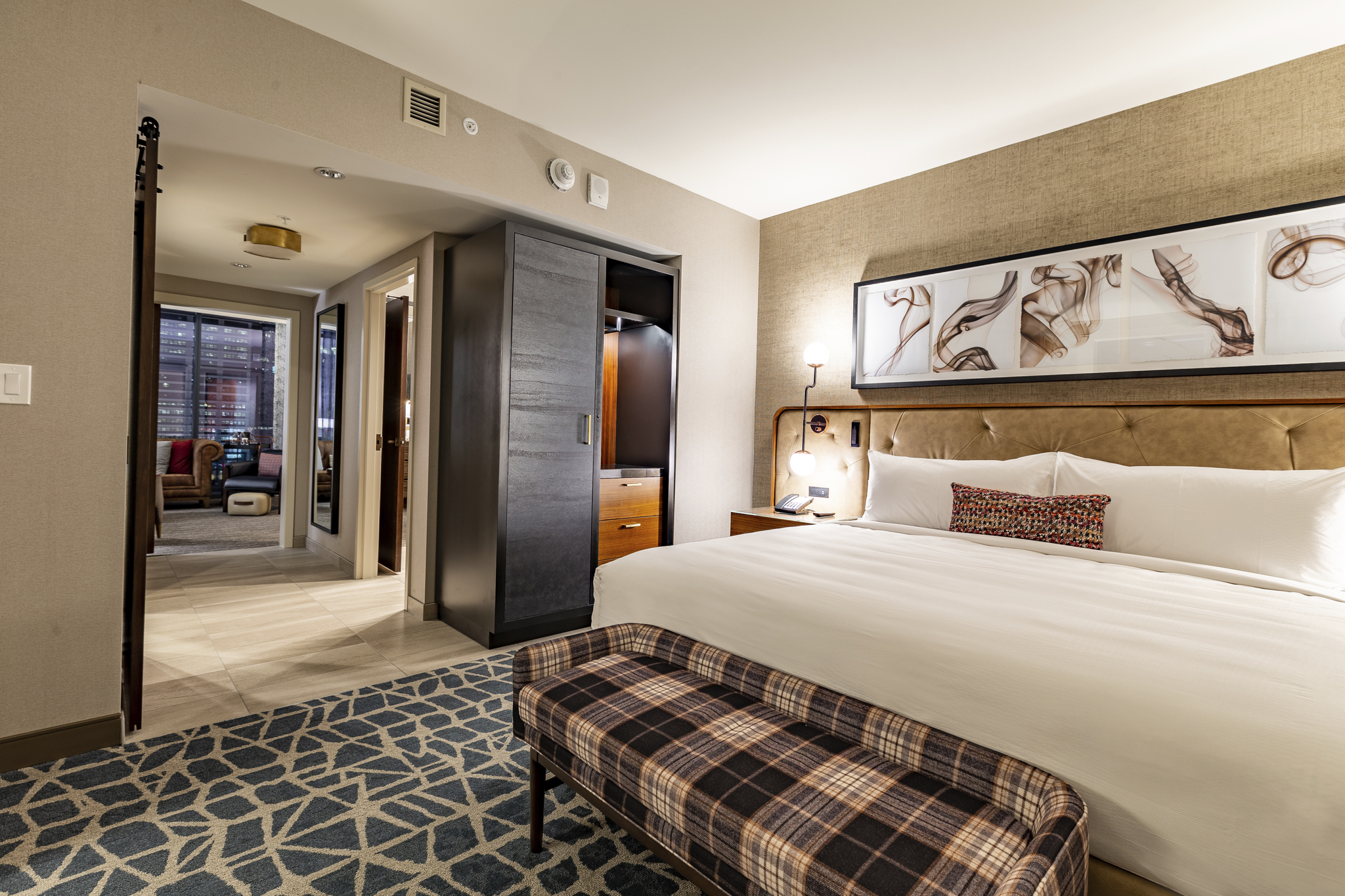 Louisville, KY  (October 30, 2019) – Located on the historic Whiskey Row, Hotel Distil has officially opened its doors today, setting a new standard for Louisville hospitality. Part of Autograph Collection Hotels, a diverse and dynamic portfolio of more than 180 hotels around the world that are independent, one-of-a-kind and champion values of vision, design and craft, Hotel Distil is the brand’s first property in Kentucky. The 205-room boutique hotel celebrates the past, present and future of Louisville’s bourbon heritage.

Hotel Distil incorporates an original 1860s era façade, which was saved following a fire in 2015, and was 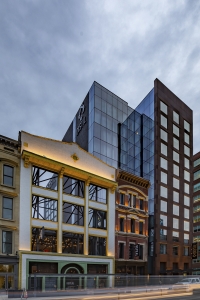 the original location and barrel house for J.T.S. Brown and Sons – whose name remains prominent above one of the entrances.  From the moment guests walk in the door, the homage to bourbon culture is subtle, but clear, as many of the design cues are taken from bourbon barrels and the distilling process, including wood tones, staves, black metal accents and copper fixtures. Other cues are taken from Louisville’s glass blowing community, including pre-Prohibition style globe light fixtures and blown glass flask art pieces.

“Hotel Distil is a game-changer for Whiskey Row and juxtaposes the area’s storied past with modern, luxury experiences and is designed to be a social anchor for visitors and locals alike,” said Dana Orlando, Hotel Distil’s general manager. “The hotel offers an authentic Louisville experience and champions Autograph Collection Hotels’ Exactly Like Nothing Elsemantra.”

One of the unique experiences guests can participate in is a celebration of the repeal of Prohibition. Hotel Distil guests will be offered an invitation – via a ‘prescription card’ at check-in – to join in the hotel’s lobby for a nightly toast at 7:33 p.m., which is 19:33 Universal Time, the year Prohibition was repealed, where they will be treated to a celebratory whiskey cocktail and a tribute to the repeal of Prohibition. Guests of the Connoisseur Suites will also have access to an in-room private bourbon cart where a bourbon ambassador will craft one of 10 premium bourbons neat or one of four Old Fashioned cocktails made with Hotel Distil’s private single barrel picks.

Hotel Distil offers a refined event space, including a 5,000-square-foot Grand Ballroom that boasts remarkable design and exquisite appointments. The event space can accommodate up to 500 people or be divided into three separate spaces for more intimate presentations, receptions or banquets. Hotel Distil’s three other meetings rooms range from 775 square feet to 1,000 square feet and are uniquely designed for breakout sessions and bold presentations alike. Complete with modern technology, attentive service and top-notch amenities, these spaces set the stage for any group. The 2,000-square-foot outdoor rooftop terrace is the only open-air, all-season terrace in Louisville. For every event, on-site catering provides locally sourced, Southern-inspired cuisine.

Aiming to enhance the already vibrant and booming Louisville dining scene, the property is also home to Whiskey Row’s only oak-fired steakhouse, Repeal. The 72-seat restaurant features selectively sourced American Wagyu steaks from Brush Creek Ranch alongside other prime cuts, a seafood raw bar, 100+ curated bourbons and classic cocktails. Together with the great food and drinks, diners can expect a perfectly curated experience accented by expertly crafted design elements embracing the area’s deep bourbon heritage and historical architecture. The restaurant’s oak-fired grill is stoked with used barrel staves from nearby distilleries throughout the day. A key feature of the restaurant’s design is a large skylight and structure allowing guests to look up and experience the historic façade. A 15-person private Barrel Room and separate bar is available for groups.

Adjacent to Repeal is the staircase entrance to Bitters End, Whiskey Row’s open-air rooftop bar, complete with a retractable glass roof. Guests can expect to be greeted with whiskey-inspired small plates, original craft cocktails and plenty of good old-fashioned bourbon – all served with a side of Whiskey Row views.

“Thanks to the deliberate efforts of Mayor Fischer and so many others, Louisville is a coveted worldwide destination for business, sports, meetings and events, and of course our longstanding bourbon heritage, said Steve Poe, Chief Executive Officer of Poe Companies, one of the hotel’s developers. “Hotel Distil’s location on Whiskey Row and just steps away from the KFC! Yum Center and the city’s business hub is a perfect complement to the city’s great progress.”

After the Civil War, Main Street became the hot spot for distilleries in Louisville. Whiskey Row itself refers to a block-long stretch from 101–133 W. Main Street that once served as home to the bourbon industry. The collection of Revivalist and Chicago School-style buildings with cast-iron storefronts were built between 1852 and 1905. In 1857, the buildings were built and used to store whiskey barrels that had been produced from the distilleries nearby. On a list of Louisville’s Most Endangered Historic Places, the buildings were slated for demolition in 2011, but an agreement between the city, local developers and preservationists saved Whiskey Row.

Hotel Distil was developed by White Lodging, Poe Companies and REI Real Estate Services. White Lodging manages the hotel and restaurants alongside its other eight hotels in Louisville, including the new Moxy Louisville Downtown and Zombie Taco restaurant, which also opened today.

Hotel Distil, part of Autograph Collection Hotels, is for those who thirst for new experiences with a more historical approach on Whiskey Row. With 161 king rooms, 33 queen rooms and 11 suites, Hotel Distil is a space with intriguing juxtapositions where you will pass through a historic façade to enjoy modern amenities. The hotel’s meeting and event space totals more than 11,000 square feet across its ballroom, three meeting rooms and outdoor terrace. Hotel Distil will feature Repeal Oak-Fired Steakhouse, Whiskey Row's only oak-fired steakhouse, and Bitters End, Whiskey Row’s only open-air rooftop bar, serving shareable plates and hand-crafted cocktails created with house-made bitters. For more information about Hotel Distil or for reservations please visit HotelDistil.com.

Autograph Collection Hotels advocates for the original, championing the individuality of each of its over 180 independent hotels located in the most desirable destinations across more than 30 countries and territories. Each is a product of passion and a personal realization of its individual founder’s vision, making each hotel singular and special: Exactly Like Nothing Else. Hand-selected for their inherent craft and distinct perspectives on design and hospitality, Autograph Collection hotels offer rich immersive moments that leave a lasting imprint. For more information, please visit www.autographhotels.com, and explore our social media channels on Instagram, Twitter, and Facebook or follow along to be inspired by immersive moments that are #ExactlyLikeNothingElse.  Autograph Collection Hotels is proud to participate in Marriott Bonvoy, the new name of Marriott’s travel program replacing Marriott Rewards®, The Ritz- Carlton Rewards®, and Starwood Preferred Guest® (SPG). The program offers members an extraordinary portfolio of global brands, experiences on Marriott Bonvoy Moments and unparalleled benefits including earning points toward free hotel stays and nights toward Elite status recognition. To enroll for free or for more information about the program, visit MarriottBonvoy.marriott.com.