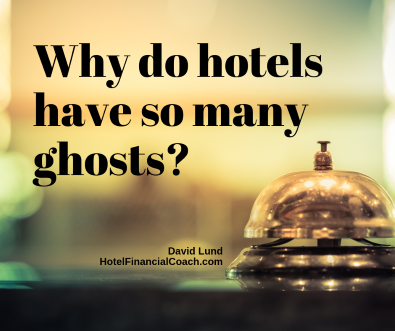 Hotels are notorious for ghosts and ghost stories. Especially in old hotels. This is a story about one of my creepier encounters with something while working in one of the oldest and most famous hotels in the world.

If a 100-year-old hotel that has 350 rooms has run an average of 70 percent occupancy and an average of 1.75 people per room occupied that’s a total of 15.7 million sleeps. Lots of chances for heart attacks, strokes, aneurysms—you get the idea, especially with the wining and dining and dancing before bed. Not to mention the other somewhat strenuous activities that some partake in while staying in the hotel like golf and workouts in the gym….

Unfortunately, dealing with people who have passed away is a fairly common thing in hotels and the idea that not everyone is ready to pass on into the next life is also well documented, hence the ghosts. And, if you’re going to haunt someplace what better digs than a hotel to hang around. There are always lots of interesting people to entertain and the surroundings are rather opulent, not to mention all the different rooms you have to choose from.

My ghost story is based on a late-night and another character I’ll call Stormin’ Norman.

Norman was the hotel night watchman. I was the bartender in the lounge all winter and the hotel was closed. The only thing operating was the lounge Thursday through Saturday, evenings only.

Norman was, to say the least, an interesting character. He was probably in his late 60s, not married and he lived with his mother. He would show up in the most unusual places in the hotel and he would try to scare me. We made a bit of a game of it and I also did my fair share of surprises.

The lounge was located in the basement of the hotel and it had its own street entrance. The bar customers would come from the town and local college entering the hotel through the lounge entrance.

At closing, I would say goodnight to the last customer and lock the street entrance. Once this was done, I would lock things up, pour myself a cold drink and balance my cash and deposit. Once this was complete, I would lock up the back door which leads to the bowels of the hotel and make my way up three floors to the lobby level and then traverse the entire length of the hotel, probably 300 yards or so. I had to go to the other end of the hotel in the lobby because that was the location of the night wallet, where I had to deposit my cash so it could be taken to the bank the following day.

Another interesting thing about this nightly trip was there were four different stairwells I could take as well as the service elevator which was left on all winter so the maintenance and administration people could move about the hotel. Norman and I made a game of trying to “surprise” each other along the different routes. The hotel hallways and stairwells were very dimly lit and the main power and water were off for the winter.

The bedroom doors were all left open and the furniture assembled in the middle of each room and the items covered with old white sheets. The lobby was especially creepy with one light at one end and another light at the other and all the lobby, veranda and garden furniture were piled in groups and covered in the same white bedsheets. The main dining room was the same with all the furniture grouped, piled and covered. All these places made excellent hiding spots. Many times, on my way to the nightly wallet I would see Norman’s flashlight beam. I had the advantage of being stealth.

One device that was not available in the winter was the guest elevator. Due to the main building power being turned off, it didn’t work.

Norman loved to pop up and he even would shine his flashlight on his face for added effects. He really got me the first few times until I started to retaliate. My favorite was to secretly see him punch the clock at the back door of the bar. Once I knew his schedule and his punch routine I knew where he was going and how long it would take him. I got him really good a few times and he was always really upset. Telling me that I was not authorized to be in that particular part of the hotel, and he would threaten me with inclusion in his security report to management.

The night that I remember best that scared the bejesus out of me was a cold and stormy Saturday night. The bar was particularly slow due to the snowstorm. It was coming down really hard. I closed the bar early and had a couple of drinks, taking my time with the closing duties. Norman made his appearance and as usual, had nothing to say and only a scowled look to share.

I made my way to the lobby by the middle stairwell then through the main lobby to the back door of the front office where I deposited my night’s receipts. Having completed this task, I was turned around heading back into the lobby when a brilliant white cascading light illuminated the wall in the area directly across from the guest elevator.

How could this be happening?

The lobby sat in darkness only dimly lit by the light from the street cascading through the windows. The white light was bright, crisp and cold. At that moment I froze. Who or what could have taken over the elevator that had been still and silent for months? I looked for a way out. I had two options. Turn to my right and go back to the front office door and down the north wing into darkness or continue my path into the lobby and the white light.

Then, in that moment of confusion and terror, it occurred to me that I had a third option: the fire door that led to the back lawn and gardens. The door was within sight and it had windows on the top half above the panic bar which was armed to the fire alarm.

In that split second, I bolted after looking right into the darkness, then left into the white light. I slammed into the fire door’s panic bar and the door flew open and out I went into the night, and into about two feet of snow that had been accumulating. I ran so fast across the lawn and down the hill to the street. Reaching the street, I stopped and looked back as the fire door hung open. No alarm and no visible light.

What had happened and why was I so freaked out? The hotel got me that night. I am almost positive Norman had no ability to throw the main power on. How could he? To this day I remember my terror and how completely alone I felt. Alone and powerless in that cavernous patiently waiting building.

After that night I had a bit of a different outlook on my nights alone in the hotel with Norman and especially my “trips” to the lobby.