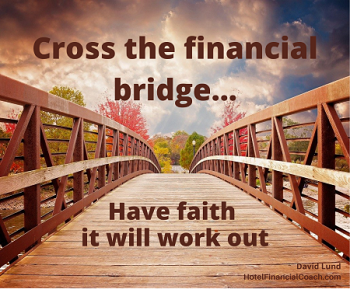 In our lives we are continuously evolving as people. When thought of most of the time, this evolution seems like a continuous stream of challenges to overcome. This persistent development is both personal and professional.

The bridge is what I refer to when I think of my advancement in the hotel profession from a 20-something leader who knew nothing about the financial goings on in the hotel to a 30-something controller who was on fire.

This is all about what it takes to cross that financial bridge and what it looks and feels like once you are on the other side. I have said this is my articles many times: The hotel business is still the kind of occupation that you can start at the back door and one day, if you are willing to work really hard, you can be the general manager, the president or the even the controller.

For me the bridge was rolled out as I weaved my way through what was – at least at that time – the ragship of the company. I did not see it at the time but when I look back it is as clear as day. I went from being ignorant about the financial processes and what it all meant to being keenly aware of it all. Knowledge is power and, in this instance, the financial where-with-all that I developed became the currency that propelled my career.

For me it all happened because of a separate set of circumstances that came together to create a situation where I was thrown into a new and different role. One where I was pretty sure I was being placed – to coin it gently – with some charity. Out of this calamity came an awesome opportunity that I seized with excitement and commitment. If I hadn’t taken the chance, I have no idea what might have happened.

The bridge is always an option and it is never clear what is on the other side. In fact, most times it looks like there is nothing worthwhile over there, and there is not even a clear destination.

The opportunities and potential get unlocked piece by piece, never in a reveal-all moment. You just take a step at a time and then all of a sudden, another door opens and what you need to do is walk through it and just keep going.

It is the belief that you can do it. It is the trust you have in the faith that things will work out and come together. It is being determined not to fail. It was for me a sense of becoming a somebody that meant a greater sense of respect for myself and a knowledge that others saw me as a legitimate trailblazer. All of this was very intoxication for me.

As the saying goes, I drank the Kool-Aid. The more I drank the more they gave me and I did more than I had ever expected or even dreamed about. In this instance, the Kool-Aid was good: refreshing and fulfilling in a good way.

The bridge is an illusion that I believe everyone has their version of. Mine was fueled by my desire not to be a failure in my own eyes. It was about being legit and not a mishap. I needed to become someone who could respect themselves. This was my driving force.

As I write this article, I am almost 60. Being a person who has had a great life so far is reassuring because I believe there is more. Lots more. I just need to keep going and developing.