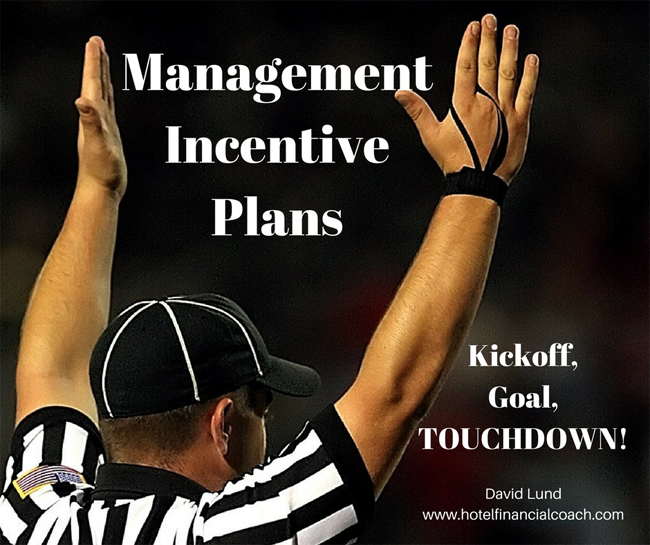 Recently I have been working with a client who has four hotels and we worked on putting together an incentive plan for his executives. This is a story about how we structured the incentive and the goals around the plan and his business.

Bonus plans or management incentive plans are nothing new. Even a recent client had almost always given his senior people an annual bonus, typically at the holiday time. When I asked him what it was based on, he said it was just the overriding feeling of his thanks for a job well done.

We then discussed the very real fact that he had not shared his financials with his leaders and this was something he wanted to do. This is a good thing because without it and other measurements the real power of the incentive is lost. Sure, his managers appreciated the bonus, but no one knew what it was really for.

We discussed creating an incentive plan that is broad-based, measurable

The hotels were relatively small, less than 150 rooms each, but still they had some very good tools to put to work in the incentive arena. We decided the first year’s incentive plan would have three components and it would also have three performance levels.

His hotel used an app that gave him good data on a daily, monthly and annual basis. The guest service score was a percentage up to 100 percent. The score for the prior year was 84 percent and the score from 2016 was 85 percent. When I asked him what his goal for 2018 was he said it was to get the score back up to 85 percent. OK, so now let’s look at the kickoff and touchdown levels. He is a big football fan, and this was exciting for him. I asked him if he would pay an incentive for service if the score for 2018 was 84 percent again. He said he would. I then asked him if he would be willing to pay a higher amount if the score was 86 percent or higher. He said he would.

So, now we have an important part of the incentive. The different payout levels. We used kickoff (starting point for payout), goal (the full payout) and touchdown (the outstanding result). With this breakdown, participants can see the importance of the measurement and it is not an all or nothing result. He will still reward good results that do not quite make the goal and also will allow participants to “double up” on the result of each individual component.

He used STR and the previous year’s result was 107 percent. One big challenge with this part of the incentive was new competition. Late in 2017, a new hotel which was a direct competitor entered his market. So, I asked him what a really good result would be for 2018 on RevPAR Index. At this point, he had two full months under his belt and his index year-over-year had dropped to 98 percent. He thought about this one quite a bit and decided a really good result would be 100 percent. We then came up with kickoff at 97 percent, goal 100 percent, and touchdown at 103 percent.

Now for the third component: Profit

He had his financials for the last two years and we zeroed in on the Gross Operating Profit number. Why GOP? Well, that is the number the manager can control. Pricing, staffing, supplies and overall efficient management cumulate at the GOP number. Most brands use this as well for management incentive plans. The GOP in this property was $2,001,418 in 2017 and $1,955,008 in 2016.

Now, for the toughest question so far: What’s the budget for 2018? He took a while to explain he did not really have a budget. This is not uncommon, and we had a good discussion about what he thought should happen in 2018. With the budget rhinoceros on the table, we agreed the most effective process would be to map out 2018 month-by-month using occupancy and average rate to produce room revenues and then model the payroll and expenses on 2017 levels. In short order, we came up with a GOP goal for 2018 at $1.95 million. Given the new competition, he would be very happy with that. We then established the kickoff $1.85 million and the touchdown at $2.1 million.

We have the framework for the plan

He now has a decision to make on the incentive gatekeeper. Will the profit target be the gatekeeper? In other words, do we need to make the profit kickoff point for the other components to pay off? Or, will the fact that the other scores are achieved generate an incentive payment?

He decided that no gatekeeper will be necessary for 2018 because it will be a challenging year and he does not want the team to be discouraged if the profit is missed. Focusing on the service, in the long run, is important. The market is changing and it is also the first year for the plan, so he wants to give his managers a fair shot.

Next step: Decide on payout percentages

He decides the “goal” is 12 percent and applying our kickoff, goal and touchdown metrics we put the data above into an Excel spreadsheet. The very last thing he had to decide before we were done is what weight each component would carry. He decides guest 30 percent, RevPAR index 30 percent and GOP 40 percent, adding up to 100 percent.

The last part of what this client needed to do to put some wheels on this plan was to meet with his incentive plan participants. This is necessary to review the structure of the three components as well as the different levels of the program. This ensures the members understand the system and, most importantly, see that the goals are achievable.

We agreed to visit the plan each quarter, and he, in turn, would update his team through regular communication and monthly copies of the guest service score, STR and financial statements. This is the best part because we will see how managers react to the plan and what ideas they put into action this year in those hotels to create better results.

That is the middle tasty part of the incentive plan sandwich. It will be interesting to see how this unfolds and how effective it is.