Hospitality Financial Leadership: I Never Worked a Day in My Life

Home/Hospitality Financial Leadership: I Never Worked a Day in My Life

Hospitality Financial Leadership: I Never Worked a Day in My Life 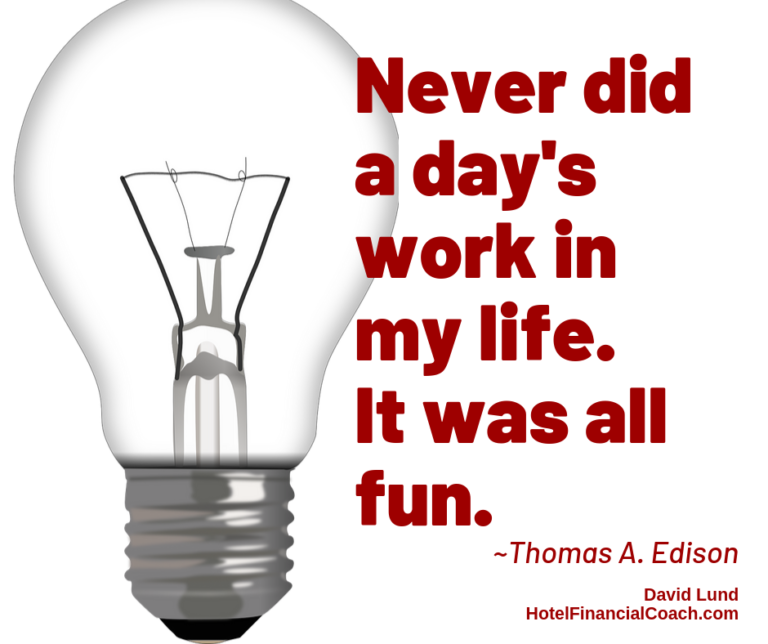 That’s the calling card for a famous quote by Thomas Edison and a popular song by Tony Bennett not to mention a plethora of other pop culture about doing something with your life and choosing work that is not really work. That is what I found on the Internet when I went looking, however, for me it was a bit different.

During my life— working in hotels for more than 30 years—I often told myself the same thing. I really felt like I had it all. A great job, a cool place to work, a solid group of people to collaborate with and above all the feeling that I was making a difference. That difference-making is what this piece is all about. How I found it and what you can look for if you are chasing that dream too and, best of all, what you can offer your team that shows them they make a difference.

My career started in hotels because I did not have any other plan. I finished high school and the arrangement at the time was to complete my summer job then head to California with my best friend to spend the winter on the beach, surfing and exploring the sacred golden land. But that was not to be. He went to university instead and I was left without plan B until my father, who was a teacher at the local community college, came home one day in September and asked me, “What I was doing now?”

I told him about my sudden loss of plans, and he told me about a new offering at the college—he was pretty sure it was a bartending course. I went to the registrar’s office and checked it out. Accommodations, Food & Beverage was the title and after laying down a few bucks for the whites, the knives and books, I was in. Hotel school was a blast, literally, and the two years flew by.

At the same time, I got a job tending bar at the local hotel and my social and school life were full and exciting. What was great about the bar job was I was left alone to make it work.

The dead of winter in my sleepy home town and we made the bar hop on the weekends. We made the establishment money, the tips were super, and what fun I had! The difference making here was they trusted me to run the place and I made a dent in what was otherwise a closed circle of only summer action.

For me this was some vindication for my California dreamin’. The following months turned into a few years and I was having a blast. Working in F&B and then the front desk at one of the most iconic hotels in the world.

I even sent for my best friend who also moved west to join me. The good times were punctuated by the work which was, as I remember it, effortless and always full of adventure and learning. One bit of difference making for me in this episode was I was the only guy on the front desk of 40-plus ladies. I learned more about the hotel business from that job than perhaps any other position ever. In those days everything was still mostly manual, and the nerve center of the hotel was the desk.

It wasn’t long and it was time to move east…

…to central Canada and my first city hotel. My, what a difference between two hotels! The city hotel was full of intrigue, mystery and a dark story at the same time. Here is where the rubber hit the road so to speak for me and my young hotel career.

I was pretty sure it was time to move on from hotels, but something saved me. Literally, out of the blue, I was on a plane flying west and taking a sharp left turn into the world of hotel finance and accounting. That was the difference making for me. Someone actually threw me a lifeline of sorts and I was brave enough to take it. Looking back, it made all the difference in my life and career.

The west is where things in my career really started to take shape. I attended night school for accounting and progressed steadily at work. I was learning so much about our business that eluded most. Namely, what it all means and how to apply what goes on in the operation to the financial piece. I vividly remember seeing myself for the first time in my life as someone who was able to understand and speak to what most could not. This was not only exciting but also incredibly energizing. The difference this time is I could see where I was going, sort of.

This time it was back to the mountains and a promotion to assistant controller. Here is where I was able to for the first time in my career to use the things, I had learned elsewhere to make a big difference in how we managed the month-end and reporting process. It occurred to me that this wasn’t really rocket science.

I was onto something special; I had the ball and I ran with it.

It seemed like before any time at all went by

My phone rang again and I was now driving in the other direction each morning to my first job as the controller of a hotel. How did all of this happen, I often asked myself? Not one to question too much about whether I was qualified or what the right thing to do was—instead I just made changes to how we did what we do based on what else I had seen. You know something is backwards or broken based on what you have seen. When I saw this, I fixed it to my way of operating. This made a monumental difference.

As fate would have it one of my guiding lights created a job just for me. He said as a minimum he wanted 10 times my salary in improved operating results from his hotels. Man, he meant it! We turned over every garbage can we could find, and the money just kept pouring out.

The difference here was I was seeing several hotels through the same lens and when you do that the comparisons are powerful. You can see what’s wrong quickly and almost effortlessly. Not to mention I was working alongside the man who had seen it all. He was such an influential teacher.

I remember he addressed a room full of managers one day and I’ll never forget what he said:

“You can tell that all of you have a great deal of common sense… because…you’re not using any of it!”

Off and running again

This time it was almost all the way east in Canada. Again, someone created a position just for me.

Operations Controller, and I had the desk, spa and housekeeping under my belt as well as the financials. The differentiation here was a view back to my core role and seeing what others saw. This was very enlightening as it was not so “black and white” over there.

From there I had a bilingual calling, then a trip to the manager’s office, a stint at corporate office, a trip back to the dark house and the final stop was Nob Hill. In total 31 years, nine moves all over North America and more than 25 different jobs.

All the while I never worked a day in my life

In the end the ability to make a difference is what disappeared. Once it was gone it was replaced by something else that didn’t appeal to me.