Hospitality Financial Leadership: Getting Close to the Engine Room

Home/Hospitality Financial Leadership: Getting Close to the Engine Room

Hospitality Financial Leadership: Getting Close to the Engine Room 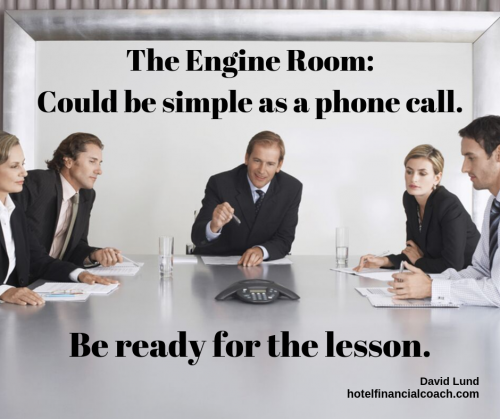 In my career I have worked with a lot of interesting characters. To say the least, they were all quite colorful, usually fanning the flames of the hotel’s drama and adding their own seasoning. One boss I had was particularly interested in teaching lessons. He made everything into a lesson. What did you learn? How did I screw up? There was always a warm underbelly to be examined.

One day we had just wrapped up our weekly executive committee meeting (sounds formal and important, but not really – kinda boring usually) and my boss asked me to stay behind as he had something for me to “listen to.” That got my attention. I remained at the table in our meeting room which was adjacent to his office. He disappeared for a moment and then his assistant appeared, and she scowled a bit at me and said, “I need to dial into the call.”

I said, “Don’t let me stop you.” With that she dialed the conference call coordinates and my boss returned.

This review was like a lineup in grade school when you are being picked for a baseball team. Very revealing. One by one the suggested person was debated, commented on and either moved forward or set aside. Comments were deliberate and concise. People’s careers hung for a few short seconds and were either confirmed or denied passage to the next step.

I heard judgments that were certainly final and career limiting…

…on many of my fellow aspiring hotel executives. I heard warm and glowing reports on other individuals that I knew, and I questioned in that moment. Did these people talking have any idea who and what they were passing judgment on? One exchange went on for a few moments about a guy I knew and it looked like he was dead on arrival so to speak only to be saved by a distant voice who reasoned that he should be given another chance due to some personal circumstances that he openly shared. Other discussions revealed apparent flaws and circumstances that resulted in labels like his time has passed, she is a real firecracker, he is damaged goods, and the best one I heard that day, “They are on the wrong bus.”

The call was like a glimpse, not a glimpse it was a centerfold shot, into the careers and futures of so many people I knew. How could it be this informal, this straightforward, so final, so cutting? I sat there speechless which was a good thing because I wasn’t supposed to be there, witnessing the slaughter and the knighting. I imagined for a moment what they must have had to say about me. I moved several times and I knew about the so-called succession plan. But I had no idea how it was administered.

The call concluded and my boss did his funny thing with the phone where he picked up the receiver only to then hang up on the call by placing the receiver down. He then looked at me and said, “You’re in and you’re out,” just like that. I smiled and took in the lesson, the less said the better in these moments is what I had learned.

On my way back to my office I reflected on what I had witnessed, and I thought, well that’s that. How else do people decide who gets what job? It’s very arbitrary but it is efficient.

People naturally think there must be a more prolonged justice, but it doesn’t work like that.