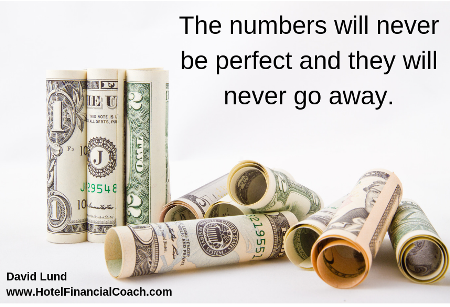 Getting your hotel leadership team excited about accounting is like someone thinking it’s fun to go to the dentist. Your average person wants nothing to do with it because they have a predisposed notion that it’s yucky, boring and better left for someone who has a hard time walking and talking at the same time.

What I have learned about getting your average hotel leader excited about the numbers is just the opposite. Let me explain.

Hotel leaders ALL want to have the “financial where-with-all” to dazzle their peers. They know it’s the secret sauce to propel their career. They all want their seat at the captain’s table. Being close to the engine room and having an invitation to be part of the inner financial circle is exciting and sexy.

Why then is there such a disconnect between leadership’s desire to be financially astute and their typical complete lack of attention and discipline when it comes to the numbers? It’s all because of the approach.

Here is the typical hotel scenario as it relates to the numbers and how they are viewed by most leaders.

What do we need to change to get the hotel management team in the hotel to embrace their numbers and see this part of their responsibilities as just another part of their job? How do we get them comfortable and excited about their financial acumen? What you want to do is to shift their perspective. You need to move away from the notion that the numbers are yucky, to the numbers are sexy and they represent the path to professionalism and greater personal prosperity. Here is how you need to proceed to shift their thinking:

Once your managers see that the numbers are just as important to their role as service and engagement, things will begin to shift. Subsequent to increasing their abilities to communicate effectively around the numbers they will see it’s very interesting. Now that they take the time necessary to manage their departmental finances they will be proud of their accomplishment. After they realize the hotel financials are not so difficult they will teach others. Post the misunderstanding that the numbers are going away and they will step up.

Your team of managers and leaders all want to have these skills and abilities. What they’re waiting for is you. They need you to lead the way and “shift the perspective.” Once you do, things will never be the same for you, your team and your business.