Recently I attended a hotel association conference where I was a speaker for one of their breakout sessions. The opening morning of the convention started with a breakfast where we listened to the many great developments within the association in the past year and heard a fantastic story from the morning keynote about evacuating an entire city without one casualty or serious injury from an oncoming forest fire. 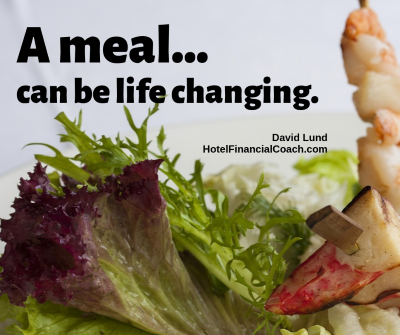 What a morning! But the thing that got me more that anything else that day was a memory. The memory of being in that very room some 35 years earlier having breakfast all by myself. You see it was the hotel and dining room where I signed my very first duty meal.

A free meal is something special for most people, especially when it is a good one. What I mean is, most people only get a free meal when they are at someone else’s house for dinner or a BBQ or a free meal from a nice restaurant when someone else is paying. These are not the same as a duty meal. That free meal with friends or a salesperson has strings attached. You are either on the hook next time or they want you to buy something. Duty meals in hotels are quite different indeed.

Going back those 35 years, I had been working in this hotel for a couple of years by then. I had started in the very same room as a busboy not some 20 months earlier. It was 1985. By my measurement in those days I was on the fast track.

I had transferred to this hotel from another in the same company from the other end of the country. Which really meant they offered me a job as a busboy making $1.90 an hour and in order to collect my first paycheck, I had to drive 4,500 kilometers (yes, I’m from Canada) and there was no moving allowance–zip.

In the previous hotel I also had worked for two years. I worked the bars as a waiter and bartender then found what I called a real job in the receiving and stores department that last summer. Summer ended and the company offered me a transfer west. Almost all the way west and getting there was my own deal.

I remember the trip well

The first stop was Montreal to stay with a good bartender friend from the hotel. We ripped it up pretty good including a late night joint down on St. Catherine’s St. Then it was on to North Bay where I met a good friend for a quiet weekend in a cabin on the shores of Lake Nipissing. Then it was the serious part of the drive, into Wisconsin under Lake Superior and across the Canadian border again to catch the Yellow Head Highway north to Edmonton. Just in time to grace my big brother’s wedding.

From there it was south to my new home and new job. I registered myself, so to speak, in the staff residence by checking in with a friend from my old hotel who I happened to meet in the parking lot shortly after my arrival. It wasn’t until a few weeks later that the staff accommodations office found out I was “squatting” there. They were not pleased to say the least.

Getting settled into my new job was not easy. I didn’t like taking a step backward (going back to busboy). In my last hotel I was a somebody. Here I was one among many busboys and that was not where I wanted to be. Before I left my last hotel, I was told to put in my time and do a good job and “something” would come up. I bided my time only to learn that the slow season was coming quickly and that meant very few hours for several weeks until the Christmas rush.

I did as I was told and made the very best of it. Like they say, showing up is half the job. Another acquaintance from my last hotel saw me in the cafeteria one afternoon after one of my lunch shifts. She asked me how it was going. I told her it was slow and then I asked her how things were for her. She smiled and said she was having fun! Well, I thought that was the end of that.

Not 10 minutes later I was clearing my plate in the dish lane and a girl I didn’t know at all came up to me and said, “Are you David?”

She was wearing what I thought was a front office uniform. That is usually how you know what people do in the hotel, by the uniform they wear. She introduced herself and asked me if I had time to talk. We both grabbed a coffee and sat down. She explained that she was the head front office cashier and needed new staff as several team members had recently left. Oh, so why me? Well, she said, our mutual friend MJ had called her to tell her about me and she wanted to let me know firsthand about the new openings.

Ten minutes later I was in what we called “personnel” in those days filling out a transfer request only to find out I was not eligible to make the change because I had not completed my six months.

With that news I made my way to the lobby where I found my new friend behind the cash end of the front desk. I told her about my bad news and thanked her. Maybe in a few months, I said.

“Not so fast,” she said, “Didn’t you work back east before coming here?”

“Stay right there and I’ll make a call.” With that she disappeared, and I took a seat feeling just a little looked upon by the desk agents, not to mention what my imagination was doing about what the guests were thinking.

She reappeared after what seemed like an eternity and she was smiling a little. She motioned me to the desk and explained that she was able to get a small exception for me.

The very next day I had my first day of training on the front desk. The job was awesome. I learned so much and by the way I was the only guy in the entire department that winter. I worked there for almost one year when another opportunity presented itself and I transferred to the F&B Control Department.

After a few months the assistant left to move to British Columbia and I was offered her job.

Now things were starting to cook

This job was really the first job where I could show “management” what I was all about. It was coincidentally the same time that the hotel got its first personal computer. This meant a steep learning curve, but it was no time until I had all the green columnar pads on Lotus spreadsheets and what would take an hour before now took four minutes.

This is where things paid off. Not only was I in the right time at the right place with work, I also had a new boss and her boss liked me. She was a bit unusual, but you take what you are given and make it work.

She is the one who gave me my own duty meal account.

Duty meals in our business are as common as shifts can be long and meals are often provided after the work is done. But to have your own duty meal account—including your own number—means you are given the privilege of going to the outlets whenever you work.

It means that even before your shift you can have a meal, heck, even on your day off. That is not only awesome, it is life changing.

I sat there during the conference breakfast as my mind wondered back through all of this and I remembered this hotel, the dining room, the people, the work, the good times and most of all how proud I was that I stuck with it.