There is a popular saying in American spurned on by the slogan for a doughnut and coffee chain, “America Runs on Dunkin’.” In this piece I am going to write about another thing that our western culture runs on even more than coffee and doughnuts, and that’s expectations. And just like coffee, and especially doughnuts, expectations are really bad for you.

You are probably thinking I am nuts even creating the title Creating Agreements vs. Having Expectations. It 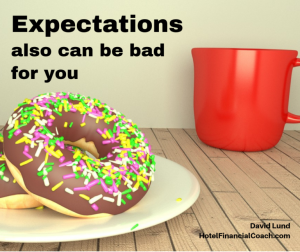 sounds kind of Pollyanna. But I want to encourage you to read on. This is my second article on this topic, and I am especially passionate about showing you the distinction between these two operating modes.

This is not a long piece and I have no expectation that you will read it, but if you do, I think I can introduce you to a more effective way to manage your relationships in the hotel—maybe even at home. If you can move in this direction, you are going to be a more effective leader and people are going to like you more.

I got a lot of the concept for this piece from an author of several great books and audio files, Steve Chandler. While his take on these expectations is not new, his way of explaining the difference between these two ways of operating is nothing short of brilliant.

First and most importantly the reason why you want to use agreements is because they work very well, whereas expectations do not work and they alienate people. When you use the word expectation, people know the subject matter at hand is all about you and has nothing whatsoever to do with them.

You may be wondering what the problem is. After all, you are the boss or, in some way and I hate to use the words, their superior, and people need to follow your instructions. Well, guess again because this is not right, and the opposite is what is really going on.

Expectations are weak and people hate having those slimy buggers put upon them. On the other hand, agreements are what people prefer and the consensus that they create is strong. Expectations are sneaky little buggers as they can work their way into many forms of communication and they may appear to be friendly and even useful. However, they are still just about you and upon closer examination you can see their telltale signs of weakness.

To make my point I am going to tell you a short story about making an agreement, and at the same time seeing the communication for just what it was—my wanting someone to do what I needed them to do.

My story takes place around the annual exercise we all love to hate in hospitality and that is budget season. I used to think that a strong approach was a tight schedule with dates that gave me time to get everyone’s submission, do my consolidation and make changes. But like always, it was a matter of pulling teeth to get the other managers to deliver on my schedule. Why was this so difficult? I gave them lots of time and they knew it was a requirement. Even the stuff I did manage to get on time was of low quality and almost always I ended up changing it. Why did I bother to chase these people anyway?

That version of silly season was shaping up much like the others, me frustrated and not getting any good budget data until something happened quite by accident. It involved our F&B manager. Her time in the position was relatively short and after seeing my budget submission schedule she asked me for a meeting.

This type of meeting usually wound up being a waste of time because I was listening to the typical operations person wax on about what they did not know and did not have time to do, which was their budget.

She approached it a bit differently. She asked if I would show her what was needed and where she could find it, to which I replied, “I’ll show you if you promise to meet the schedule and do it in detail.” To which she responded, “Absolutely – you can count on me.”

We met three different times in three days and I showed her where she could find the information she needed for rooms and banquet sales, the detailed items for her expenses and finally the formulas to use for her staffing guide. I was very pleasantly surprised when the same manager asked the following week if we could meet to review her detail before it was submitted. I was even more surprised when I saw what she had put together. It was a very complete and well thought out draft of her budget.

It made me think about what had happened over the last two weeks and most importantly why it went down the way it did.

Normally, I send out the schedule which is all about me and my deadlines. There is no getting away from the fact that come hell or high water, I need to get the budget done. In this case with her we took a different approach that had the two of us exchange value with each other.

On close examination there were four parts to our transaction. We both got something and we both gave something. I gave her help to show her where to find things and she gave me a commitment to the due dates. She got what she wanted which was the help she needed, and she gave me the quality information I needed on time.

The more I thought about this transaction the more excited I got about what I had discovered. Having coincidentally listened to Mr. Chandler’s audio on expectations at nearly the same time, I was completely taken aback by how effective this exchange had been.

Finding out how to help someone get what they wanted was the key to getting what I wanted.

Not some one-sided half-baked me, me, me version of an expectation.

I tried a little experiment the following week and asked another manager point blank what he needed from me to get his budget done and done properly. He responded with a smile and half joked that what he really needed was a new laptop.

So, guess what I did? I flipped the rotation of laptop roll outs, so he got his machine the next day. Funny thing was I got his submission ahead of time and he nailed it.

Throughout the entire month leading up to the first draft being complete I did the same “agreement exercise” with several other managers and each one delivered.