The hotel business is often a grind. I mean it is tough slugging it out each day. The guests never go away or when they do, they are replaced by others. Colleagues need your constant attention or lord knows what they will get up to if left to their own devices. And there is always someone who needs something that just cannot wait. I think you know what I mean. But alas there is the other side of the coin. That is when someone gives you an unexpected gift! Right out of the blue.

That has happened to me many times in my 30-plus years. This story is about one of those times. It all started when I was still a cigarette smoker. We smokers tend to band together at the dark end of the building entrance out of sight. We see the usual people and there is always some gossip to catch up on.

On this mid-spring day, I was talking with a friend who I have known for maybe 15 years. We had worked together in another hotel and we also knew a lot of the same people. In her previous job at the last hotel she was the chief steward, not an easy job by any means. Somehow, she was now in the marketing department and I am always curious about what people are up to. I asked her what cool projects she was working on and she told me about the partnership we had with a certain automobile brand and how we were leveraging that into the launch of a new hotel magazine.

Interesting, I replied, I then told her that I was off to Montreal the next week for the F1 race and I inquired if she was going. Why not, right? She was working with the manufacturer of one of the brands that also competes in F1. It would be common for her to be attending as that’s how they promoted their cars—by inviting their advertising partners and clients.

Then she said the magic words, “But I have two tickets for the Sunday race. If you want them, they are yours.”

I don’t need to be asked twice. Five minutes later the tickets were in my hands. These just aren’t tickets, they are VIP hospitality suite passes. My wife Johanne and I made our way to Montreal and in the normal tradition we spent both Friday and Saturday at the track, our tickets were for the grandstands in turn 10. We had a great time and we were joined by friends from Calgary.

Sunday arrived and now we had a decision to make. Johanne, being the incredibly gracious and kind person that she is, gave up what should have been her ticket to the VIP suite to one of the guys from Calgary. Brad, the lucky recipient, was a major F1 fan. I say “was” because sadly he is no longer with us. RIP Brad.

The adventure of a lifetime started on the water that Sunday morning. In order to get to the part of the track where our tickets were required us to take a boat ride on the St. Laurence River. 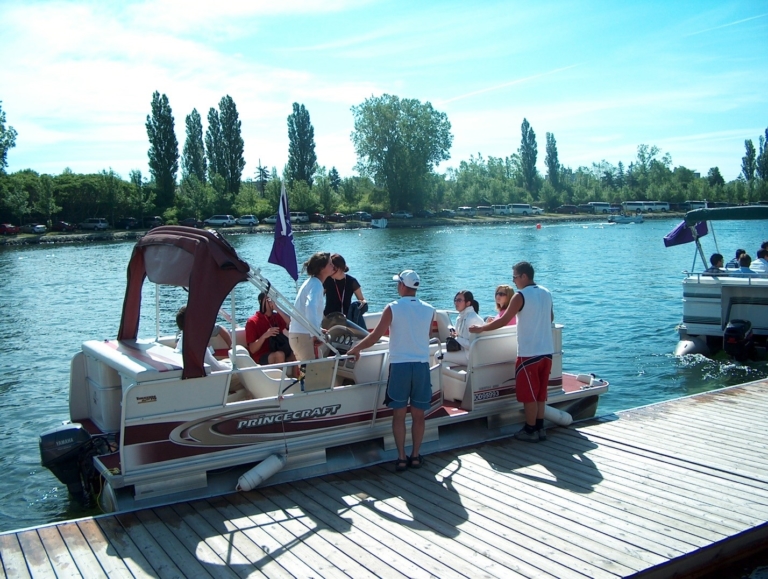 Once we arrived at the section of the track where our suite was, the real extent of the value of these tickets was revealed. We were situated at pit out, which is the lane that the drivers must navigate before they are on the track. The covered suites run the entire length of pit out and are parallel to the front stretch and included a great view to Corners 1 and 2. The suites were well equipped with different sections for each major sponsor.

We had individual seating with our own tables. There was a full hosted bar. They served breakfast and then lunch. The catering was done by a local hotel and the service and offerings were top notch. They had TVs you could watch and nice washrooms to boot. I was in heaven, this is what I imagined my heaven to be like.

My buddy Brad was in shock. He is an oil and gas guy and this kind of treatment is not his thing. His eyes were like saucers. We were having a lot of fun to put it mildly. We arrived at about 10:30 a.m. and the smoked salmon, eggs and Canadian bacon really hit the spot. We were completely at awe with the seats and our accommodations for the day. Attending a car race in the hot sun is fun but it can also be a little tiring. Watch a Grand Prix race in the lap of luxury is the way to go!

The racing was fantastic. It was the eighth race of the 2004 Formula One season. There was lots of drama in the race but at the finish line Michael Schumacher took his 77th career victory, his 7th win of the 2004 season, and his 7th win in Canada. Lots of top drivers competed in the event, names like Alonso, Raikkonen, Button, Barrichello, Massa, just to name a few.

Now for the podium finish. It just so happened that the podium was adjacent to our section of the track. I am always one to check out the many different aspects of a facility, and the way things are set up and managed in the F1 universe is mind boggling.

It is like a rock concert, a maximum-security prison and a five-star hotel all thrown together. On one of my tours to check things out I saw the turnstile security access to the podium section. I also had a chance meeting with one of the F1 traveling circus workers. They do not mess around in F1 and my mind immediately went into overdrive. How could I get in there for the winner’s celebration? So, what did I do? I asked her to let us in. She looked at me kinda funny and said, “Come back when there are two laps left.”

I did what I was told, and she swiped her magic card and we were in through the door! Things on the other side of that turnstile got immensely more interesting. Lots of photographers, security, politicians and the top three finishers along with their cars. BTW finisher number three was Ralph Schumacher who started on the pole and he was not a happy camper. At least not compared to his brother Michael and the number two finisher Rubens Barrichello.

As it turns out Ralph’s bad mood got even worse when a post-race inspection found a “problem” with his brakes and he was disqualified.

The F1 podium is a sacred place. I’ll let the pictures tell the story. To wrap this one up I want to thank my friend for the tickets and dedicate this post to our friend Brad. He left us way too soon.