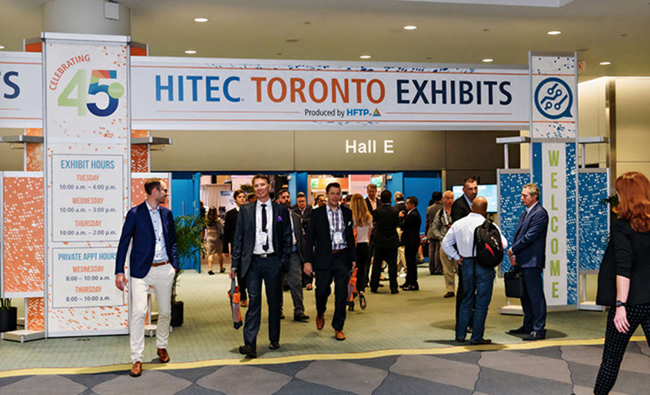 Hospitality technology professionals from around the world gathered this week in Toronto, Ontario Canada to explore the industry's best practices and latest innovations at the world's largest and oldest Hospitality Industry Technology Exposition and Conference (HITEC®). Produced yearly by international association Hospitality Financial and Technology Professionals (HFTP®), this year marked the 45th anniversary since HFTP brought its HITEC brand to life in 1972. HITEC Toronto was held from June 26–29, 2017 at the Metro Toronto Convention Centre.

"2017 has been an exceptionally groundbreaking year for both HFTP and its HITEC brand," said Frank Wolfe, CAE, CEO at HFTP. "Based on HITEC's popularity, HFTP broke international barriers this year by producing inaugural European and Middle Eastern event counterparts to the recognized, larger North American conference. HFTP looks forward to continuing its mission in promoting education within the hospitality industry, and expanding its production of successful events."

The Entrepreneur 20X (E20X) Toronto innovation competition for hospitality startups featured 13 companies, an expert panel of five judges and 16 industry mentors who coached the entrepreneurs before their four-minute pitch. Contestant Jennifer Wong from Stay Wanderful won the E20X Judge's Award grand prize of $5,000.00 USD, and startup Arrivedo was chosen by conference attendees via the HITEC 2017 mobile app as the People's Startup Award winner.

HITEC Toronto was the second of three HITEC's that HFTP will produce this year. Next up, the inaugural HITEC Dubai – a Middle Eastern counterpart – will take place November 14-15 at the Conrad Dubai in Dubai, UAE in partnership with Naseba. In 2018, HFTP will bring back the European counterpart HITEC Amsterdam on April 11-14 in addition to the larger North American event HITEC Houston slated for June 26-29.

HITEC is the world's largest and oldest hospitality technology exposition and conference brand. HITEC offers a unique combination of top-notch education, and brings together the brightest minds and hottest technologies from across the globe to one place. The unparalleled event offers attendees essential education, access to top hospitality technology industry experts and the resources to find cost-effective ways to improve company bottom lines. Combined with the intimate opportunities to connect with fellow professionals, HITEC has everything to enhance your career.

Historically hosted annually in a different city throughout the United States, HFTP decided to break tradition in 2017 by hosting three HITEC events all taking place outside of U.S. borders– in Toronto, Amsterdam and Dubai. This will be the first time the global association's largest HITEC event – featuring thousands of hospitality professionals from around the world – will take place outside of the U.S. In 2017, HFTP is producing its larger HITEC Toronto as well as two additional, inaugural HITEC events: HITEC Amsterdam and HITEC Dubai.

For more information about HITEC and HFTP's other global activities, contact the HFTP Meetings & Special Events Department at [email protected] or visit www.hftp.org and www.hftp.org/hitec. Download the HFTP/HITEC media kit via the HFTP website.

Hospitality Financial and Technology Professionals (HFTP) is an international, nonprofit hospitality association, headquartered in Austin, Texas, USA, that uniquely understands the industry's problems. HFTP has members and stakeholders across the globe. HFTP assists its members in finding solutions to industry problems more efficiently than any organization via its expert networks, research, conferences such as HITEC and certification programs. HFTP also owns the world's only hospitality specific search engine, PineappleSearch.com. HFTP is recognized as the spokes group for the finance and technology segment of the hospitality industry. For more information about HFTP, email [email protected] or download the HFTP/HITEC media kit via the HFTP website.