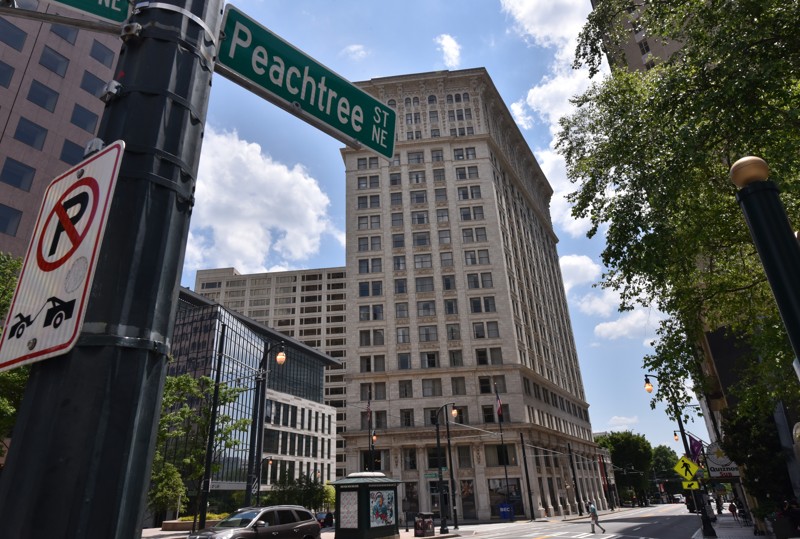 May 24– May 24–It was once Atlanta's tallest building, a 17-story beaux-arts tribute to Coca-Cola founder Asa Candler.

For 100 years it has been home to the city's "finest baths" (back when that was a selling point), the law offices of famed attorney Johnnie Cochran, and a bank vault rumored to have briefly held the formula for Coke.

After three years of fits and starts, Hilton will open the Candler as its newest Curio Collection hotel. The destination will feature 265-rooms, a ballroom, meeting space, a restaurant and fitness center. A private dining room for wine tastings or other events is being considered for the old safe of Central Bank & Trust, the bank Candler helped organize in 1906.

"I'm hoping to make it into a dining room," said general manager Martin Wormull as he surveyed the vault's imposing entry during a tour of the facility earlier this week. "It's got a two-foot thick, armor-plated door. There's a cage and drawers and things like that. It will really make a unique feature of the hotel."

The Candler Hotel Atlanta, a member of the National Register of Historic Places, becomes the latest national example of a former office building, post office, train station or bank to get a second life as adaptive reuse lodging. The idea of creating hotels out of buildings whose original use no longer make sense has been around for decades, but has picked up steam in the last dozen or so years as developable land has been squeezed in booming cities like Atlanta.

Georgia's capital only has a handful of such buildings, including the Glenn Hotel on Marietta Street, the Home2 Suites in the old Walton Building on Walton Street, the Residence Inn by Marriott at the 21-story former Rhodes-Haverty building downtown, a Courtyard in the Carnegie Building downtown, and the Hotel Indigo locations in downtown and Midtown. That scarcity will help the Candler Hotel Atlanta differentiate itself in a city with more than 100,000 hotel rooms, hospitality expert Mark Woodworth said.

"We have an atypical small number of boutique, lifestyle hotels, especially in a city with our number of rooms," said Woodworth, a senior managing director at analytics firm CBRE Hotels. "The conversion of the Candler Building is certainly oriented toward the fastest-growing segment of the marketplace. The demand for boutique lifestyle hotels continues to grow at a much strong rate within the industry as a whole. The simple reason is that's what today's lodging consumer is looking for."

Wormull said he expects the hotel to appeal to executives, businesspeople and weddings and celebrations more so than big conventions, which usually require more meeting space than will be available.

Asa Candler built it in 1906 on land at the edge of Woodruff Park that cost $160,000 or about $4.5 million today, according to Hilton. The opulence was abundant, in the cherub-laden marble frieze that lines the grand staircase to the brass gargoyles bracing the ceiling (One carving includes a bust of Candler's mother).

Tiffany glass was employed in second floor windows, while outside carved into the Amicolola marble are the busts of William Shakespeare, Richard Wagner and Michelangelo. The marble winged lions that sit at the foot of the grand staircase have become the logo of the building.

Hugh Acheson, a former contestant on Bravo's "Top Chef Master," will operate By George restaurant in the old Central bank space on the Peachtree Street side of the building.

"It will have classic cuisine with a French influence," Wormull said of By George, which will serve breakfast, lunch and dinner.

Other features will include about 6,000 square feet for small meetings, a boardroom with a 25 foot-table to seat up to 17 people and ballroom that can accommodate about 120 people, which Wormull thinks will be popular for weddings. Rooms will average about $300 a night.

Hilton first announced the project about three years ago, but bringing it to life has been a heavier lift than originally thought. The hotel is the first for the building's owner, Thornhill Companies.

Harvey Newman, professor emeritus from the Andrew Young School of Policy Studies at Georgia State University, said the Candler is an architectural gem whose preservation as a hotel will create a whole new generation of design lovers. He said he once taught a visually impaired student the difference between staid architecture and construction as art by having her feel the detail in the walls and finishes of the Candler Building.

"The Candler Building certainly deserves to be preserved and treasured," he said. "This will enhance it and should offer it a fine future."