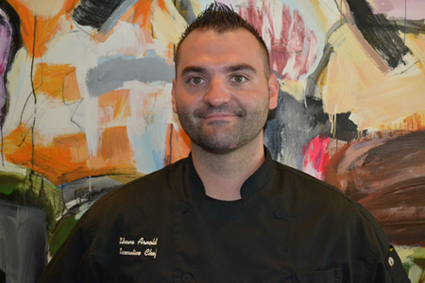 HARTFORD, CT (September 7, 2017) – Shane Arnold has been appointed as the Executive Chef for the 393-room Hilton Hartford. As Executive Chef, Arnold’s responsibilities include menu creation and management of all food departments throughout the Hilton including the hotel’s restaurant, m&m Bistro. Waterford Hotel Group, Inc. professionally manages the Hilton Hartford.

Chef Arnold joins the Hilton team from his most recent position as Executive Chef at the Sheraton Hartford Hotel at Bradley Airport in Windsor Locks, CT. Prior to the Sheraton, Chef Arnold was the Executive Sous Chef and Assistant Restaurant Manager for the 409-room Marriott Hartford Downtown, a role he held for nearly 10 years. Arnold previously serviced as a Task Force Chef for Waterford Hotel Group, lending his culinary management expertise to several properties in the company’s portfolio. In 2011, he was awarded the Outstanding Manager of the Year award by the Connecticut Lodging Association.

“We are thrilled to welcome Chef Arnold to the Hilton Hartford,” commented Nick Lorusso, General Manager of the hotel. “His culinary experience and familiarity with the day to day operations of a large hotel make him a welcomed addition to the Hilton’s food and beverage team,” added Lorusso.

About the Hilton Hartford

The 393-room Hilton Hartford is located at 315 Trumbull Street in the heart of downtown Hartford. The hotel features an indoor pool swimming pool, fitness center, complimentary wireless Internet access, m&m Bistro, an American contemporary restaurant, Element 315, a cocktail lounge, meeting space, and business center.  The hotel is located in Hartford's city center and is within walking distance of over 25 local restaurants and pubs. The hotel is located near many historic museums, Capitol tours, art performances, and numerous historic attractions such as The Wadsworth Atheneum Museum of Art, the Mark Twain House or The Old State House.  The hotel is connected to the XL Center (UCONN Basketball) via the city's skywalk and located near many corporate, regional and national headquarters. The hotel is 15 miles away from Bradley International Airport and two blocks from Union Train Station.  The Hilton Hartford is professionally managed by Waterford Hotel Group.  For more information, please visit www.hiltonhartford.com.