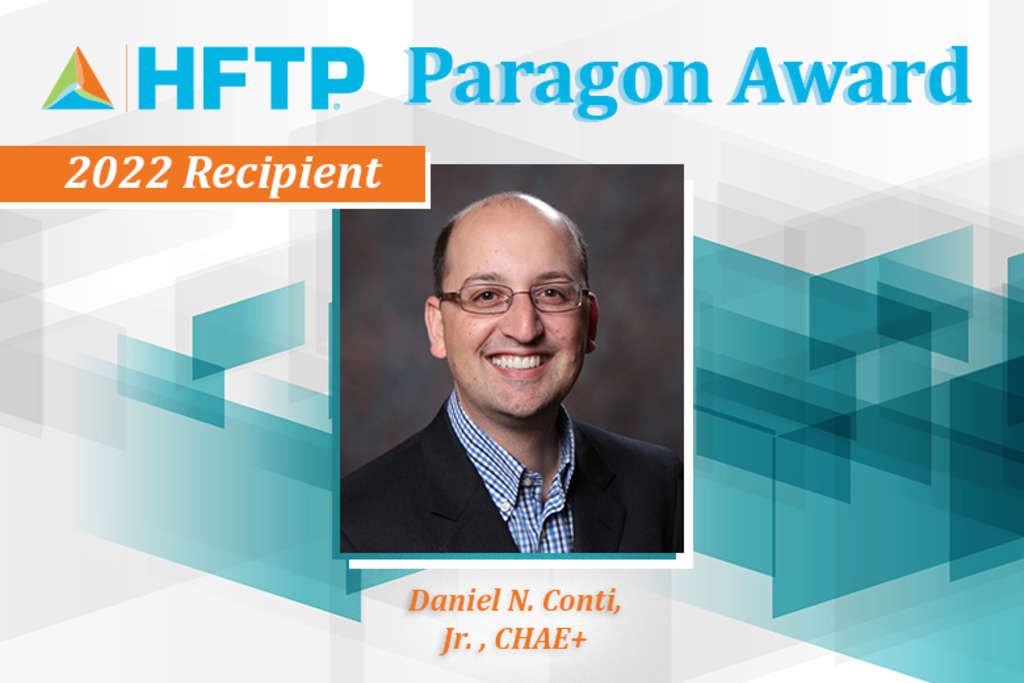 Daniel N. Conti, Jr., CHAE+ was selected as the 2022 Hospitality Financial and Technology Professionals (HFTP®) Paragon Award recipient for his unwavering support of the association and substantial knowledge-sharing contributions as a frequent speaker and mentor to fellow HFTP members. Conti is the chief financial officer for Jupiter Island Holdings, Inc. in Hobe Sound, Florida USA. He has been a member of HFTP for 20 years and served in multiple association leadership positions including as the 2014–2015 HFTP Global President. Conti will be honored on September 15 at the HFTP Annual Convention in Austin, Texas.

“It is an honor to be chosen as this year’s HFTP Paragon Award winner,” said Conti. “Looking at past recipients, I am a bit in awe of being included in such a prestigious group. What I have done pales in comparison to these icons of our industry and to receive this award by my peers is quite humbling.”

Conti has been with Jupiter Island Holdings for six years, where he has oversight of a $27 million budget and is responsible for the financial reporting and planning for the entire operation. This includes 40 accommodation units, five restaurants, a golf course, tennis, croquet deck and retail stores. Previous to this position, Conti gained experience in both the club and hotel finance fields holding positions throughout Florida, including at the Wyndham Grand Jupiter at Harbourside Place, Ritz-Carlton Golf Club & Spa, Ibis Golf & Country Club, Bear Lakes Country Club, Piper’s Landing Inc., and Frenchman’s Creek Country Club/POA.

He joined HFTP in 2002 and quickly became involved in association leadership. He has served on the HFTP Education Advisory, HITEC Advisory, Leadership Summit Advisory, Communications Editorial Advisory, Young Professionals Advisory and the GOLF 20X Advisory Councils. He is also active with the HFTP Florida Treasure Coast Chapter. He became a director on the HFTP Global Board in 2008 and took a position on the HFTP Global Executive Committee in 2012, moving up successively until he assumed the Global President position in 2014 for a one-year term. Following this period, Conti became a frequent speaker at HFTP events on topics such as hospitality finance, human resources, ethics and technology.

“Daniel is an incredible speaker, and his innovative style is well-known,” said Wendy Zurstadt, CHAE+, CPA, HFTP Global Past President and HFTP Paragon Award recipient. “He has challenged us, he has enlightened us and he has embraced us.”

“Whether it is on public speaking, the art of saying no or ethics, Daniel is always willing to share and mentor,” said Thomas Smith, CHAE, HFTP Global Past President and HFTP Paragon Award Recipient. “I have witnessed firsthand how he is willing to help wherever needed and is a strong voice for members that don’t have one. Many of our members have Daniel to thank for getting more involved.”

Established in 1999, the prestigious HFTP Paragon Award recognizes individuals each year who have made a significant and lasting contribution to both HFTP and the hospitality industry. Paragon Award nominees can be HFTP members; representatives of industry-related associations, societies or trade publications; leaders from hospitality businesses, educational institutions and other related disciplines. A panel of industry experts selects the award recipients who are traditionally recognized at HFTP’s Annual Convention.

The HFTP Annual Convention is September 14 – 16, 2022 at the Hilton Austin in Austin, Texas USA. Register to attend. For more information about HFTP events, contact the HFTP Meetings & Special Events Department at [email protected], +1 (512) 249-5333. For more information on the Paragon Award, contact the HFTP Communications Department at [email protected] or +1 (512) 249-5333.