By Mark VanStekelenburg and Jenna Finkelstein

In 2007, CBRE introduced Trends® in the Hotel Spa Industry in response to the spa industry’s rapid expansion within hotels and resorts and its relevance to hotels’ bottom lines. For the second time in the history of the publication, spa revenue increased at a higher rate than rooms revenue and total operating revenue. During 2018, the 159 hotels in our survey sample of achieved a 3.7 percent growth in RevPAR, which led to a 3.8 percent rise in total operating revenue. Concurrently, spa department revenue increased by 4.8 percent. With RevPAR forecast to increase less than 1.5 percent through 2021, the Spa Department represents an opportunity for hotel owners. Wellness is a growing desire in the minds of guests, and hotels can capitalize on this trend.

The Makeup of the Hotel Spa Guest

Hotels continue to diversify their spa and wellness offerings to generate more revenue, but it is important to look at the mix of customers. The customer segmentation for all the hotel spas in 2018 was comprised of 53 percent hotel guests, 4 percent spa members and 43 percent locals/others. When looking at urban hotel spas, the customer segmentation differs in that the percentage of locals is higher, at 61 percent. This suggests there is an opportunity for hotel owners to provide packages to entice the local community into their hotel spas for different services. In addition, there is opportunity to convert these local patrons into members and provide a steady income stream.

Conversely, resort hotels attribute 62 percent of their customer base to hotel guests, 32 percent to locals/others and 6 percent to spa members. Resort hotels are likely located in destinations, outside of cities, and therefore rely heavily on their overnight guests to utilize the spa facilities. Resort hotel spas also have an opportunity to capture business by engaging with guests prior to their arrival. It is interesting to note that members are a higher percentage of customers at resort hotels than urban hotels. Resort hotels are effectively converting local guests into members largely because of greater square footage and expanded facilities.

While the United States has seen record-breaking numbers of travelers, it is important for hotel spas to note the difference between the psychographic profile of the travelers in order to capture more revenue. Knowing the customer is important to refine the treatment menu and ensure the hotel spa is providing the proper services and mix of facilities. According to Expedia and The Center for Generational Kinetics’ 2018 Generations on the Move study, there is an emerging trend within the American economy in which citizens are shifting from placing value on material things to placing value on experiences. Out of the 1,000 adults in the United States sampled for this study, aged 18-65, 74 percent reported prioritizing experiences over products or things. Baby Boomers (born between 1946 and 1964) see traditional travel experiences, such as sightseeing or touring, as the most important, while Millennials (born between 1977 and 1995) and Gen X (born between 1965 and 1976) desire relaxation, such as the beach or spa time, more than anything else. There is a valuable opportunity for hotel spas to increasingly target younger generations, Millennials and Gen X, to provide memorable experiences and capture greater revenue.

The study also suggests Americans across all generations like to travel with family members, such as spouses, children, parents, or other family members. The national study found that 58 percent of Gen Z respondents’ parents and 24 percent of Millennial respondents’ parents paid for trip expenses when they traveled together over the past year. This finding suggests there is an opportunity for hotel spas to offer family packages and customize the experiences based on each family member, which will allow hotels spas to capture the highest amount of revenue.

Improvements in both revenues and profitability were seen in all hotel spas categories. Hotels with Fewer than 200 Rooms posted the highest increase in revenue at 13.3 percent, as well as the highest increase in profit at 12.5 percent. As in prior years, despite rising labor expenses, decreases in other department operating expenses, along with revenue increases led to profit gains for all hotel spas.

In today’s globalized environment, hotel spas face ongoing challenges such as the rise of the social media and a tight labor market. The evolution of social media and review sites has elevated customer expectations and provided customers influence on the success of hotels spas. Although the consequences can be tremendously beneficial, the risk of one bad review tarnishing a hotel spa’s reputation exists. Moreover, the current labor market has led hotel spas to encounter challenges recruiting and retaining qualified employees. While the culture shift towards health-consciousness and environmentalism provides hotels spas opportunities to capture more revenue through creative initiatives, rising labor costs have put upward pressure on operating expenses. Hotel spas will be successful through the adoptions of cost-reducing initiatives, cross-training, and customer-centric offerings. 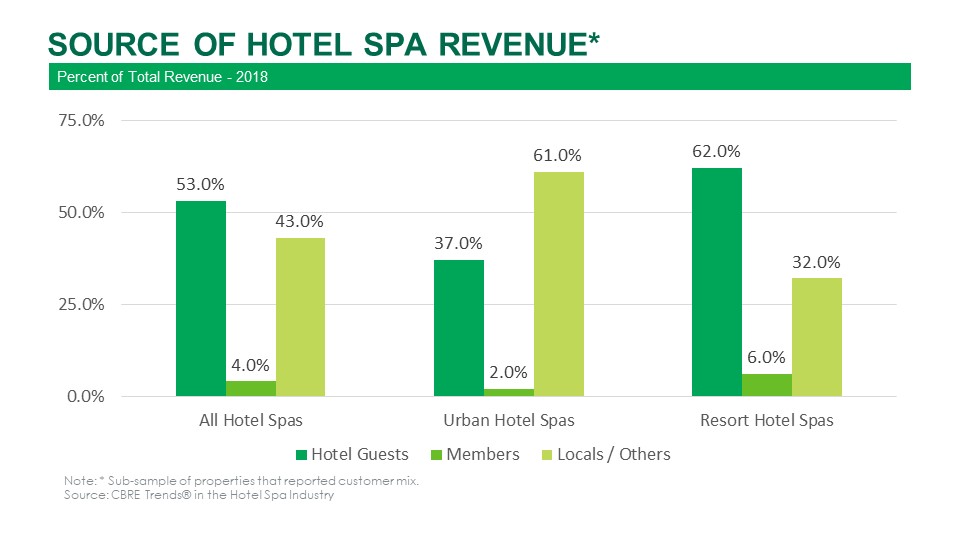 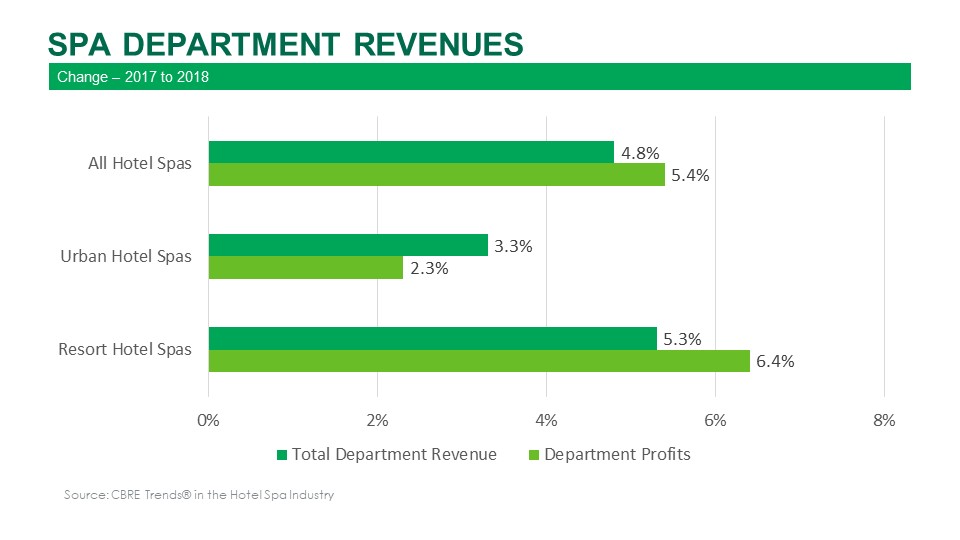 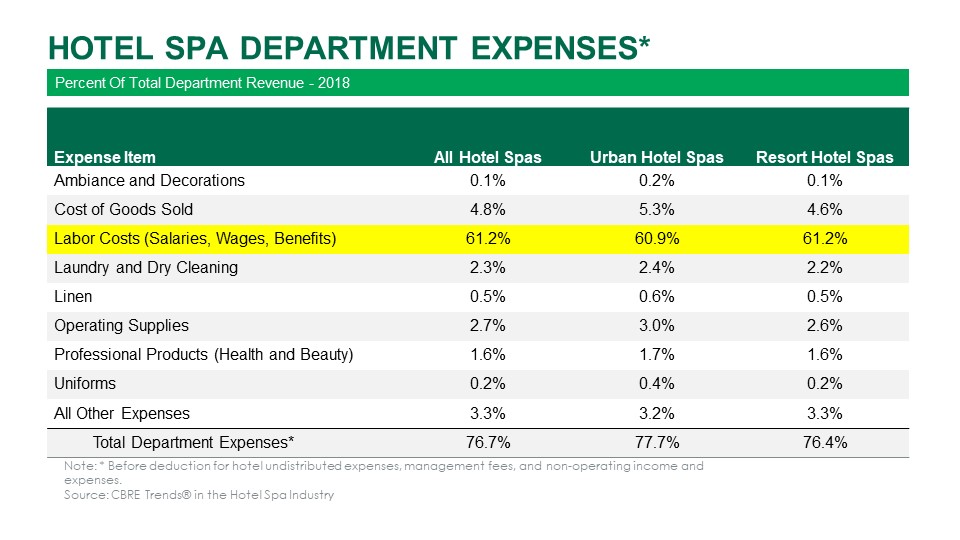 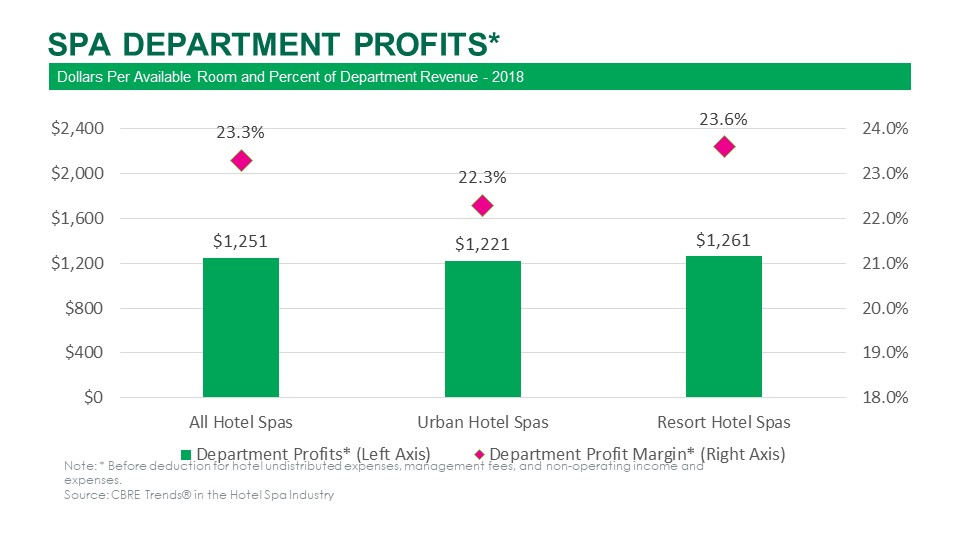 About Mark VanStekelenburg and Jenna Finkelstein

Practice Leader Mark VanStekelenburg, and Director Jenna Finkelstein are located in the Hotels Advisory department of the CBRE office in New York City. To purchase a copy of the Trends® in the Hotel Spa Industry report please visit https://pip.cbrehotels.com/store, or call (855) 223-1200. This article was published in the January 2020 edition of Lodging.