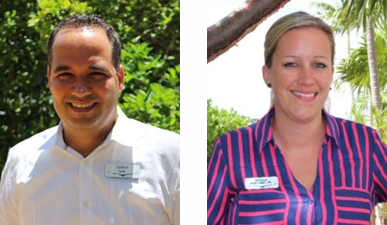 Yunior Rodriguez has been promoted from food and beverage director to resort director. A Cuban native, Rodriguez relocated to Miami after college where he began his career in hospitality with Interstate Hotels & Resorts and then Starwood Hotels & Resorts. Prior to his position at Hawks Cay, he served as food and beverage director at Casa Marina, a Waldorf Astoria Resort, for seven years.

Jessica Barrett is taking over as food and beverage director for Rodriguez. The Dutch native joined the Hawks Cay team 13 years ago and has held several positions from human resources manager to banquet manager. She is being promoted from outlets director. Barrett studied Hospitality Management in the Netherlands.

“Yunior and Jessica are two longtime associates who fit perfectly into their new positions,” said Sheldon Suga. “They understand the quality of the Hawks Cay brand and the unique experience we create for guests, which is vital for the overall success of the Resort. We’re extremely fortunate to have them as senior leaders on our team.”

Fresh off the heels of a multimillion-dollar renovation, the resort now features a new coastal casual design in all public spaces, as well as meeting rooms. The final piece in the renovation was completed this summer with the much-anticipated opening of the new marina restaurant, Angler & Ale.

A recipient of the prestigious AAA Four Diamond Award and a member of the Preferred Hotel Group Lifestyle Collection, Hawks Cay Resort is located on Duck Key in the Middle Florida Keys. Situated roughly halfway between Key Largo and Key West at mile marker 61, this 60-acre, tropical destination is easily accessible by car, boat or plane yet feels worlds away from everyday life.