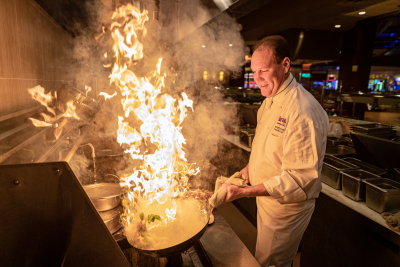 FUNNER, CALIF. (Jan. 28, 2020) – Harrah’s Resort Southern California today announced the addition of Executive Chef Michael Marshall to its food and beverage team. Marshall brings more than 25 years of experience to his new role in Funner, Calif. and will oversee culinary development in addition to maintaining the high standard for outstanding dining experiences at the resort.

“Chef Michael is the perfect fit for our culinary team,” said Darrell Pilant, senior vice president and general manager of Harrah’s Resort SoCal. “His vision for the future of dining in Funner is right on target and his depth of knowledge and passion for the Harrah’s brand are so valuable. There’s a lot of exciting news on the horizon and we’re excited that Michael has already hit the ground running.”

Marshall began his culinary journey at the age of 14, working as a dishwasher and then as a cook for Marie Callender’s in Phoenix, Ariz. After a brief stint working in finance in Northern California, he realized his true passion was cooking and moved on to spend five years apprenticing at various Hyatt Regency properties before accepting a position as a chef saucier at the Four Seasons Resort and Club Dallas at Las Colinas in Irving, Texas in 1994. Marshall thrived in the fast-paced kitchen environment and moved on to an executive chef role with the Hotel St. Germain in Dallas, Texas in 1998 where, during his tenure, the property was awarded four and one-half stars for cuisine by the acclaimed Dallas Morning News and received a Mobil four-star rating for outstanding cuisine. He then moved on to hold an executive sous chef role with the Omni Mandalay Hotel at Las Colinas in Irving, Texas before making the cross-country move to Connecticut, where he kicked off his east coast residency as the executive chef at Omni New Haven Hotel at Yale in New Haven, Conn. In this role, Marshall oversaw all levels of culinary production ranging from in-room dining, restaurants, catering and beyond before accepting an executive chef role at the Hilton Stamford Hotel and Executive Meeting Center in neighboring Stamford, Conn., where he played a leading role in a $30 million-dollar renovation and rebranding. Marshall then journeyed abroad with Celebrity Cruises encompassing Central and South America, Mexico and Alaska before returning back to the states.

Most recently, Marshall was the executive chef at Harrah’s Cherokee Casino Resort in Cherokee, N.C., a position he held for nearly a decade. During his time with Harrah’s Cherokee Casino Resort, he was an integral part of numerous new restaurant openings and ensured all food and beverage operations at the resort were strategic, creative and profitable. At Harrah’s Resort Southern California, he will oversee culinary operations across the property’s various outlets including restaurants, in-room dining, catered events, banquets and more, promising to bring inspired new flavor to the resort.

“Everyone in Funner has already been so welcoming and I can’t wait to really dig into all things culinary at Harrah’s Resort SoCal,” said Marshall. “We have some really exciting plans for 2020 and I’m looking forward to what promises to be a very exciting year.”

In his free time, Marshall enjoys spending time with his family including his two young children. His hobbies include futures trading, swimming and going to the beach.

Funner (pronounced Fun-er) is located in North San Diego County, California. The destination was created in 2016 by the Rincon Business Committee (“Tribal Council”), the elected governing body of the Rincon Band of Luiseño Indians of the Rincon Reservation, California. Located between San Diego and Los Angeles, in a mountain valley along the San Luis Rey River, Funner is home to Harrah’s Resort SoCal and the first-ever Funner, CA mayor.  In addition, the city holds the first tribally owned brewery, SR76 Beerworks; Dive, a trifecta of pools including Southern California’s first Swim-up Bar; eight restaurants including recognizable names like Smashburger®, Starbucks® and Robeks®, along with 10-time Wine Spectator Award-Winner Fiore steakhouse. To book your stay or learn more about the city where fun lives, go to www.visitfunner.com.

About The Rincon Band of Luiseño Indians

The Rincon Band of Luiseño Indians reside on a 5,000-acre reservation in Valley Center, California. Established in 1875, the Rincon Band is a sovereign government recognized by the U.S. Constitution, the United States Congress, court precedent, and federal policy. The Rincon Band owns Harrah’s Resort Southern California and uses profits and other commercial enterprises to provide government services, cultural programs and economic development resources for their members and surrounding communities.