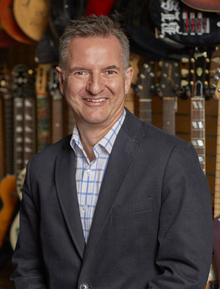 ORLANDO, Fla., Aug. 30, 2017 — Hard Rock International announces the promotion of Andrew Nasskau to vice president of operations development for the brand. As the former Area Vice President of Operations, Nasskau was responsible for the management, operations and pre-opening of Hard Rock Hotels throughout Europe, the Middle East, Africa and India. Directly reporting to Senior Vice President of Hotels, Dale Hipsh, Nasskau's new role will include overseeing pre-opening global operations and development for the brand, as well as the brand's managed portfolio.

"With more than 30 years of experience in the hospitality industry, Andrew is the perfect fit for the position of vice president operations development and we look forward to seeing his continued success," said Dale Hipsh, senior vice president of hotels, Hard Rock International. "From serving guests to hoteliers, Andrew's career has been a stadium tour packed with sellout dates in London, Dubai, Tenerife and more."

A seasoned veteran in the hospitality industry, Nasskau joined the Hard Rock Hotels & Casinos team in 2015 as regional director of operations – EMEA and was promoted in 2016 to area vice president of operations – EMEA. As area vice president of operations, he was responsible for overseeing all area hotel operations while simultaneously working closely with partners to ensure brand standards were met, driving strategic growth and increased profitability. With more than 30 years of experience in the hospitality industry, Nasskau has worked with five-star hotel companies and spent 14 years of his career with Ritz-Carlton at various locations worldwide, where he successfully led hotel operations, planned expansions and openings, and generated groundbreaking revenues for the brand.

Adding to his resume, Nasskau served as corporate director of operations for Luxury Hotel Partners in 2013, spearheading management and operations for the portfolio of luxury boutique hotels across Europe.

The appointment of Andrew Nasskau comes as the Hotel & Casino portfolio actively expands into China, Europe and key gateway cities around the world. For more information on Hard Rock, International, visit hardrock.com.