By Achin Khanna and Karan Sahani

Generating over US$ 200 Billion in revenue and providing over 40 million people a livelihood in 2016, the Travel & Tourism industry contributed almost 10% to the nation’s Gross Domestic Product, earning India the 7th rank in the world, according to a recent report by the World Travel and Tourism Council (WTTC). The hospitality sector provides for a critical and inherent part of this contribution.

The honorable Prime Minister has repeatedly spoken about Tourism being an intrinsic part of his vision from an economic growth perspective. Measures such as the ‘Make in India’ campaign and the provision for E-Visas to most of the planet were met with applause and cheer by stakeholders in the business. One almost began to believe that the Travel & Tourism industry had finally begun to receive the attention it rightfully deserved. In recent events, including the highly contentious highway liquor-ban and the just declared Goods & Services Tax announcement, it appears that while sectors such as aviation and tour operators are likely to be satisfied with the slabs extended to them, the Hospitality business has been extended the second fiddle treatment.

Hotel projects tend to be highly capital intensive, necessitating laborious & tedious years from a construction standpoint, require extended gestation periods for breakeven and are frequently plagued by tribulations such as a very high cost of borrowing, relatively short repayment schedules as well as a maze of licenses, permits & approvals that are often marred with red-tapeism and bureaucracy. Hotel performances are easily and instantly impacted by altering socio-economic and political forces and the business is inherently cyclical from a performance stand-point to begin with. It would be fair to say that the brave hearts who choose to invest in this business aren’t necessarily signing up for an easy ride.

A couple of months ago, the courts, in their wisdom, imposed a blanket ban on vending of alcohol within 500-meters of all national and state highways. While the premise and the sentiment behind the argument that ‘right to life must take precedence over the liberty to drink’ was never in question and in fact makes eminent sense, the hope was that selling bottles of liquor from road-side “thekas” would be curbed in a bid to avoid drinking & driving accidents. The interpretation, however, has ended up impacting free standing restaurants & hotels as well, resultantly making hundreds of such establishments dry. The impact of this is not limited to loss of revenue by way of liquor sales. It has caused a ripple effect on consumer choices from a lodging standpoint – the primary generator of revenue for hotels. It’s a classic case of the presence of alcohol not necessarily aiding in revenue enhancement, but its absence almost certainly harming the ability to attract guests. Hotel owners now must contend with an unexpected an unforeseen environment that has made an immediate and significant impact on their ability to earn revenue and it will not be surprising to see more Non-Performing Assets (NPAs) in the months ahead.

The matter of GST is now slated to further add to the sector’s woes. Hotels with a realized rate of Rs.5000 and above shall be required to levy 28% GST on the bill. The argument is that this level of spend points to ‘luxury’. The hotel sector was traditionally marred with a variety of taxes and these varied by state. Luxury Tax ranged from 0% in certain parts of the nation to 20% of published tariff in others. Figure 1 below provides a comparison between the existing luxury tax rates across all the states to the GST rate of 28%. If one were to put aside other costs (such as service charge, municipal tax, Cess etc.), on an ‘apples to apples’ comparison, not a single state was levying such a high tax on its guests as will now be the case with this new tax regime. 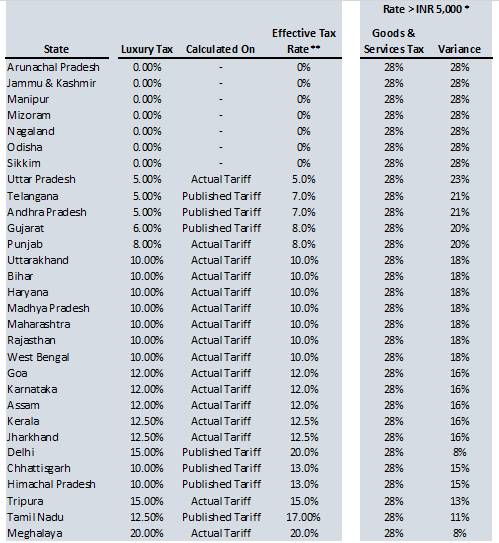 Figure 2 provides a quick comparison to the primary tax levied by prominent cities across the globe. Again, we are slated to be the most expensive. 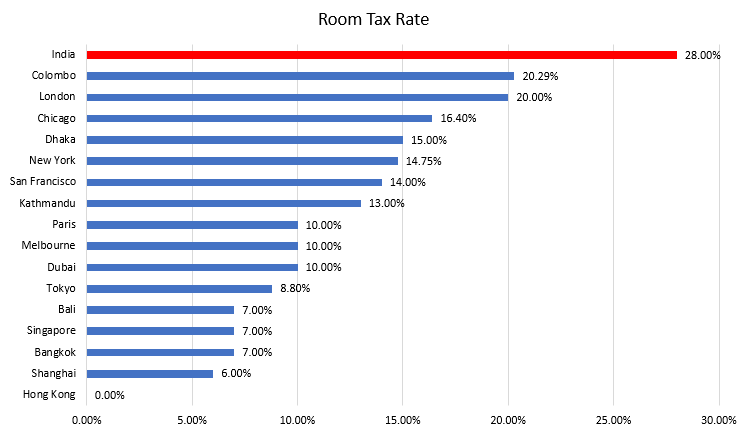 The basic premise of creating slabs for hotels (No tax below Rs.1000, 12% GST between 1001 & 2500 & 18% GST between 2501 and 5000) is flawed. India has about 120,000 organized or branded hotel rooms. Approximately 65% of this inventory averaged a realized room rate of Rs.5000 or more in 2016. Essentially, two-thirds of the branded supply in India is now left with no option but to brace itself for tough times ahead. Hotels may be forced to reduce their room rates in a bid to woo guests, who will most certainly not be keen on paying an extra 10% to 16% tax on their room rate. Besides, treating the need for a lodging accommodation (A roof on your head when you are traveling) as a luxury doesn’t seem to make common sense. The government’s inability to view the hotel sector as a provider of infrastructure rather a source of luxury is at the root of the issue. Over 70% of hotel accommodation is presently consumed by corporate or business travelers. Hotel rooms are thus a “need” and not a “luxury”. Decisions such as these are matters of serious concern for the stakeholders in the hospitality business and one can only hope that the ‘powers to be’ shall realize that no good shall come out of breaking the camel’s back.

In conclusion, the hospitality sector has been displaying a steady growth in demand over the past eighteen months and the next three to five years are expected to witness an overall up-cycle. However, considering recent decisions by both the Judiciary & Executive branches of the nation, it almost seems like the hospitality sector will probably grow not because of the support provided by government, but in spite it. 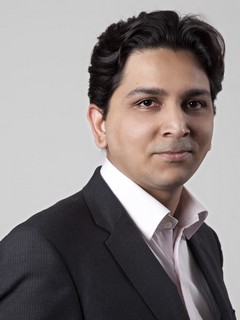 Achin Khanna is the Managing Director of Consulting and Valuation at HVS South Asia. He is a Member of the Royal Institution of Chartered Surveyors (MRICS). Over the past nine years at HVS, Achin has directed a large number of assignments, performed economic feasibility analyses and large scale portfolio valuations, successfully conducted operator searches and management contract negotiations. He has extensive experience in conducting hotel valuations, both in India and internationally. Prior to joining HVS, Achin spent ten years in the United States working across various roles in hotel operations, revenue management, franchise relations and business development. Achin holds a Bachelor of Science in Hospitality Management from Widener University, Chester, PA, and a MBA from the University of Phoenix, Arizona, USA. 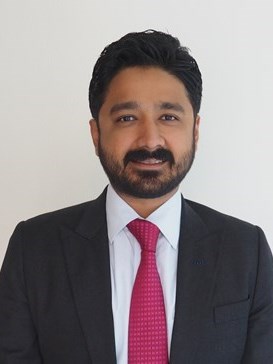 Karan Sahani is an Associate Director – Consulting & Valuation with HVS South Asia. He has managed and executed several engagements including market studies, management contract negotiations, feasibility studies of mixed-use developments & portfolio valuations across five countries. Prior to his tenure with HVS, he was associated with the Taj Group and has worked in the revenue management and corporate sales & marketing. Karan holds a Bachelor of Arts (Hons.) in Hospitality Management from the Institute of Hotel Management, Aurangabad (University of Huddersfield, UK) in addition to multiple specialized certifications in Hospitality Marketing and Revenue Management from Harvard Business School & Cornell University.