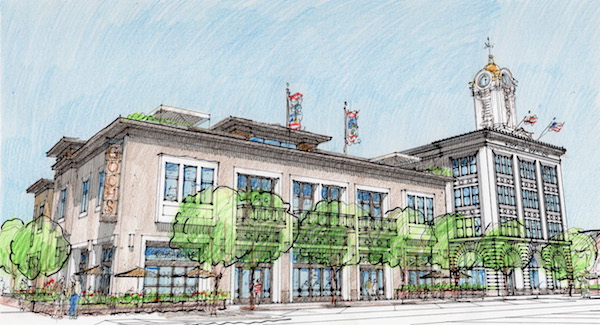 San Francisco, Calif. (March 14, 2019) – Eric Horodas, President of Greystone Hotels, and Hugh Futrell, President of Hugh Futrell Corporation, announce new details on their upcoming joint project: the transformation of downtown Santa Rosa’s historic Empire Building and adjacent 19 Old Courthouse Square building into a 71-room boutique hotel. The Hotel E will be located at 37 Old Courthouse Square and will open to the public in two phases, with the first phase debuting in late spring 2019. The Hotel E will be the first new hotel in Santa Rosa since the devastating wildfires of October 2017. Renderings of the hotel can be found here and model room images can be found here.

In announcing the hotel name and new details, Greystone Hotels also announces the appointment of Vern Lakusta as General Manager of the Hotel E. A 16-year veteran of the hospitality industry with a Level 1 Master Sommelier designation and deep background in luxury hotels, Lakusta comes to the Greystone team from the Hilton Los Angeles. He previously held roles at the Langham Huntington Hotel and Spa, the W Los Angeles, and the Charlie Palmer Group. Joining Lakusta as Director of Sales at the hotel is Debi Dobley, a long-time Sonoma County resident most recently the Director of Sales and Marketing at the Hilton Sonoma Wine Country.

The boutique hotel’s interior design, led by frequent Greystone collaborator Jacqueline McGee of Ealain Studio, will be inspired by elegant and distinctive local Sonoma homes, and will feature double and king room types, as well as two suites. A number of guestrooms will look out with sweeping views over scenic Courthouse Square and towards the Bennett Valley Peak and Sonoma Mountain.

In its new iteration as a hotel, the exterior of the iconic Beaux Arts Empire Building will not change. Immediately next door, demolition conducted in 2018 has opened up a future courtyard between the Empire Building and the two-story building at 19 Old Courthouse Square. The building at 19 Old Courthouse Square, extensively renovated as an integral part of Hotel E and harmonious in style with the Empire Building, will include an added third floor and roof deck with a café overlooking Old Courthouse Square. The Empire Building portion of the hotel will be the first phase to open and will be home to The Enology Lounge, a combination wine bar, living room, and lobby, approximately 1,000 square feet of divisible meeting space, and 39 guestrooms. The second phase of the hotel, in 19 Old Courthouse Square, will open later in 2019, and will feature an additional 29 guestrooms and 2 suites with private decks, a large public courtyard intended for relaxing, eating, and drinking, the roof deck cafe, fitness center, and additional meeting space. The second phase of the hotel will also welcome a Starbucks and the first Wine Country location of Perry’s—an iconic, family-owned San Francisco dining institution and bar, serving breakfast, brunch, lunch, and dinner.

The historic Empire Building was constructed in 1908. The owner/developers have applied for, and received preliminary approval of, placing the building on the National Historic Registry. Over the past 100 years, the building has been home to a college, bank, and most recently a law firm, which moved out in 2016. In its new life, the Hotel E will serve as an anchor for the charming Courthouse Square and a home base for travelers exploring Wine Country and the rapidly-evolving city of Santa Rosa. The Hotel E—named for its location at the entrance to wine country, regional focus on enology, and brand-wide “Experience Exceptional Service” motto, as well as its historic association as “the Empire Building”—will be the first North Bay hotel in Greystone’s boutique collection, and its ninth boutique hotel overall, joining the Inn at Union Square, the King George Hotel and the Hotel Griffon in San Francisco; the Hotel Los Gatos and the Creekside Inn in Silicon Valley; and the Elan Hotel, the Empress Hotel and the Bristol Hotel in Southern California.

An independently owned hotel management company based in San Francisco, Greystone Hotels was founded in 1995 by President and CEO Eric Horodas and Peter Trethewey. Greystone owns and manages 11 properties in California and Oregon, with a 12th hotel under construction in downtown Santa Rosa. Dedicated to superior customer service and eco-friendly hospitality, the Greystone portfolio consists of nine independent boutique hotels and inns, and three flagship-affiliated properties (Best Western International and Marriott International). Each Greystone staff member is focused on providing exceptional guest experiences for business and leisure travelers seeking friendly, comfortable and welcoming accommodations as their home away from home. Every hotel in the Greystone portfolio also provides its guests with unique decor and programming informed by the location of each hotel. All of Greystone’s California properties are certified by the California Green Lodging Association for on-site sustainability efforts, and Greystone’s independent boutique hotels are members of the L.E. Hotels family—a global hotel representation company. Visit us and “Experience Exceptional Service” during every stay.

Led by long time Santa Rosa residents Hugh Futrell and David Walter, the Hugh Futrell Corporation has over thirty-five years’ experience as one of the premier builders and developers in the North Bay specializing in apartment and condominium residential neighborhoods, affordable housing, health care facilities, mixed use developments, and office and retail buildings. Among more than forty projects completed by the company are midrise urban core signature projects such as Museum on the Square, transformation of an abandoned, nuclear blast resistant telephone switching building into a mixed-use office and retail project, the Downtown Apartments, Railroad Square Terrace and 200 4th Street in Railroad Square, and Humboldt Apartments, a 52-unit affordable housing project. The Corporation has won a variety of awards, including the Business of the Year from the Santa Rosa MetroChamber, Merit Awards from the City of Santa Rosa, and Infrastructure Champion awards from the American Society of Civil Engineers.